What is the Jacobean Era?

It was the period when King James was on the throne of first Scotland, then England too. His reign straddled the turn of the 17th century. He wrote a Bible you know.

For centuries, the English had been attempting to conquer Scotland. In 1603, it happened the other way round.

The King of Scotland, James VI, was crowned King of England too, when Queen Elizabeth I died without having had children. The Scots could be forgiven for feeling very smug about this, but for the fact that James was an Anglophile.

The Jacobean period is notable for the foundation of English colonies in America; the Gunpowder Plot; Shakespearian plays; and religious war.

When Did the Jacobean Era Begin?

It depends which country you lived in at the time! There's a choice of three dates. 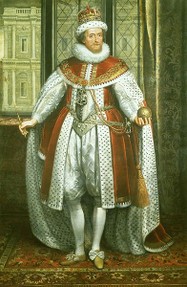 In Latin, the name James is rendered Jacobus.  It's from this root that we get Jacobean, meaning the reign of King James VI of Scotland, or I of England and Wales.

On July 24th 1567, Mary, Queen of Scots, was forced to abdicate the throne in favor of her baby son.  This is technically the very beginning of the Jacobean era, as it was the moment when King James became monarch of Scotland.

However, as he was only thirteen months old at the time, he didn't have much influence over events.  Unless we're counting the need to feed, clean and dress him.

It wasn't until June 1583, when James was seventeen, that he began to assume power over his realm.  That's really the true start of the Jacobean age in Scotland.

However, on March 24th 1603, Queen Elizabeth I died in England, leaving no Tudor heir.  James of Scotland was proclaimed King of England too on the same day.  This is the beginning of the English and Welsh Jacobean era.

We still haven't finished! Also on March 24th 1603, James had also been proclaimed King of Ireland, as Elizabeth claimed the crown there too.  Unfortunately, the Irish were having none of that.

On March 11th 1605, James found it necessary to issue a proclamation, throughout Ireland, stating that all Irish people were his direct subjects and not answerable to a local lord or clan chief.

Saying it and the Irish obeying it are two very different things, but some could argue that this was the Jacobean age in Ireland now too.  All done!  Pick your country and take your date!

What is the Edwardian Era?
At the beginning of the 20th century, this was the historical period when Edward VII was on the throne of Britain. A lot happened.

When Did the Jacobean Era End?

It ended upon the death of King James the Sixth and First in 1625.

This one is much easier.  The Jacobean age turned into the Stuart era on March 27th 1625, when King James died. It doesn't matter which country you were in at the time, it all still ended on that day.

James died in Theobalds House, in London, England, with his best friend (some say lover) George Villiers, Duke of Buckingham, at his side.

The king hadn't been well for a long time.  In the months leading up to his death, he'd suffered from arthritis, gout, ague and fainting fits.  Then he had a stroke.  What finally killed him was a bout of dysentery on top of all of that.

He was buried in Westminster Abbey, London.

Learn about Jacobean Fashion and Theater

This was a period when the leading playwright was William Shakespeare and everyone looked fabulous.

It was a time of deep religious feeling, with several Christian denominations vying for supremacy within the British Isles.

The way that you said your prayers could mean the difference between life and death, freedom or persecution; often depending upon precisely where you were and who you were talking to at the time. As a rule of thumb, it wasn't a good age to be either a Catholic or a witch.  Or even supposed to be one of those.

On the other hand, it was an age of relative peace, particularly in England and Wales.  The wars they had fought with Spain and Ireland, during much of Elizabeth's reign, came to an end when James came to the throne.  For Scotland, it was finally a time of stability, as so many of their former monarchs had been killed young.

For Ireland, and the First Natives of America and Newfoundland, it was an age of cultural genocide, dispossession of land, displacement and mass slaughter.  Not coincidentally, for groups of Lowland Scots and English Puritans, it was a time of emigration, into Ulster and the New World respectively.

The arts and intellectual pursuits flowered under Jacobean patronage too, particularly those in which his queen, Anne of Denmark, found interest.  The list of playwrights, artists and poets is huge, but the big name at the top there is William Shakespeare.

Discover more about what life was like in Jacobean Britain; or pick up the King James version of the English Bible.

What Happened in the Jacobean Era (Scotland)?

What Happened in the Jacobean Era (Great Britain and Ireland)?

Colonies; witch-hunts; the Gunpowder Plot; religious wars; Shakespeare; tobacco; and a Bible. Not in that order.

Beginning of April. Christmas Day was March 25th, hence all of those shepherds and lambs in the Nativity. It caused some uproar at the time, when it was changed.

i'm intrigued when was new years day before it was Jan 1st?

As a Wiccan, I'm very glad that I wasn't around then. 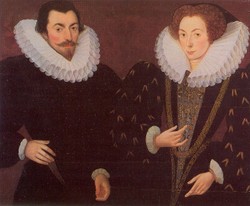