The 21 December, 2012, is believed by many people to be the end of the world, as predicted by the calendar of the Mayans, but Druid leader King Arthur Pendragon thinks otherwise.

King Arthur Pendragon, the leader of the Loyal Arthurian Warband Druid Order doesn’t believe that the Winter Solstice of 21 December 2012 is going to be the end of the world. The well-known eco-warrior and campaigner is celebrating this important date at Stonehenge along with thousands of other Druids, Pagans and other people who choose to gather there.

Arthur believes he is, and is thought by many people,to be, the reincarnation of the legendary Celtic king or chieftain who was prophesied to make his return when the land of Britain was in its hour of greatest need. It is believed, with good reason that that time has arrived! King Arthur has a modern-day Excalibur and knights and ladies joining his order are knighted swearing respectively on the sword or the scabbard to uphold the Ancient Virtues of Truth, Honour and Justice.

Arthur Pendragon has made a name for himself by being featured in the media on many occasions. He stands out with his colourful appearance wearing a silver circlet, long grey hair and full beard and being dressed in a druid robe and cloak.  He is famous too for his political activism and protests at road construction camps in the past such as Twyford Down and Newbury, as well as his pickets at Stonehenge. His followers believe that it was Arthur Pendragon who was responsible for getting access to the public allowed at Midsummer Solstice, and this he achieved by getting arrested every year for breaking the so-called “exclusion zone” around Stonehenge.

The Trials of Arthur (Revised)

King Arthur Protesting for the return of our Ancestors

The Stonehenge picket - Bring back the bones of the Ancient Dead

Bones of the Ancient Dead

He has been involved in recent years with carrying on a picket there to get supporters to sign a petition for the return of the bones of the ancient dead to their original resting place in Stonehenge. The remains had been removed by archaeologists who said they would return them but this never happened.

King Arthur's 11:11 message to the world

King Arthur, like many other people all around the world, believes that the 21 December 2012 is a very important day to celebrate. And whilst he doesn't think that the Mayan Calendar end of the world idea that many people fear, is anything to worry about, he does feel sure that this is a time in which great and positive changes for the world and the people of this planet can be set in motion.

King Arthur is releasing his message to the media and people of the world at 11:11 am on 21 December and he is hoping as many as possible will respond to it.  He is calling for the peoples and leaders of the world to unite and to work for World Peace, an end to economic slavery and the creation of a ‘Greener’ planet.

For those going to Stonehenge to Celebrate Winter Solstice on Friday 21 December, Wiltshire and Dorset buses run from 6.30 am from Salisbury bus station to the English Heritage car park.

If like me you cannot make it to Stonehenge, be there in spirit and support King Arthur’s cause. Do what you can to make a real change!

Buy books about the Mayan calendar

Find out more about the Mayan calendar

The World Ended Today... A New Dawn According to King Arthur

Very sorry you couldn't make it, Jo! I couldn't either but Arthur asked me to post and share his Press Release at 11:11 at Facebook so I have been able to at least help by doing that! https://www.facebook.com/notes/steve-...

I'm so gutted. I was supposed to be there. It's been planned since Midsummer. But I've been ill this week and last night had to make the call. Sad days. 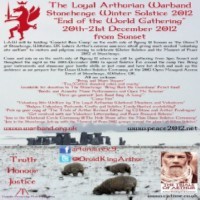 C.J. Stone is an author several books, as well as being a journalist and freelance writer. He is probably most famous for his column Housing Benefit Hill that was in The Guardian.
13%  0   2 BardofEly
United Kingdom of Great Britain and Northern Ireland

Although many people in Cardiff and South Wales know nothing about them there are some ancient burial chambers just outside the city - St Lythans and Tinkinswood Burial Chambers
Loading ...
Error!