Knowing Our History Helps Us Create A Better Future

We must truly know our own history and work together to create a brighter future together.

What if you discovered this history you think you know, the one you were taught back in the 6th grade, the same thing your children are learning now, is not quite the truth? Or, what if what you thought you knew, not just about one topic, but the majority of historical topics, is an outright lie?

We believe in the future. We bring children into it. We are the ones who are ultimately responsible for their well-being.

We are responsible for what they know and understand about themselves and the world around them, both near and far away in places.

And yet, what do we really know of our history or the history of the world around us?

There are many fascinating articles, books, movies, lectures, you name it, about world history. Much of it is available online, and even in the palm of nearly every human on the planet (or seems to be. Please don't quote me).

The problem is, we only want to learn what makes us comfortable, especially when it comes to our history. In my neck of the woods, the U.S., a lot of our history only goes back 'so far,' in my case, my grandparents who have been gone for nearly two decades, and even the next generation, my parents, are going.

What I remember about their family histories isn't much. What my mother has researched and found isn't much more and most of what she found turned out to be different from what I thought I knew.

I've also been doing some historical reading, this time focused on the native history of the American continent. It's nothing like the history I remember from grade school.

All this had me questioning not only who I am, but who I've been taught to be and by whom?

And what about all the 'stuff' we no longer remember, because it was just lost to time or washed from history?

Maybe it's time we all learned a new lesson.

Can You Handle It?

Watch this video, A Radical Experiment in Empathy.

While it's not exactly a history lesson, I think as you watch it and gain a different perspective, you'll understand what I mean by having been taught something different not only about the world around you, but the world as a whole.

Because sometimes it's not just what you think you know - it's finding out you never "thought of it like that."

A Radical Experiement in Empathy

19 minutes to change your mind

We need to look at the bigger picture. Instead of building a wall to keep people out who are only doing what any mother would do - to get her children to a better place, a safer place - we need to see why mothers, fathers, brothers and sisters are forced to make such a decision in the first place.

I mean, let's think about this from our own perspective. What if a bomb suddenly went off in your city. Or maybe not something as traumatic? Well, too bad. I want you to get inside of some one else's shoes. And these shoes happen to be those of a 25-year-old woman with two kids under the age of three whose husband has been found shot to death by the local drug/military/political/mafia. Take your pick.

Or maybe the last bomb that hit the city you live in was just close enough to make you say, that's it, we're going to have to leave. Today.

But I'll dial it back for those who can't see either scenario just yet.

Let's say you're sitting in a bar with a buddy and he or she leans over and says, "You know what? Pack the kids up, we're going to walk to Canada. Tomorrow."

And you say, "well that sounds like a swell idea!"

And you go home and your wife and kids happily agree to pack up what ever they can carry and walk to Canada because you and your best buddy decided this sounded like a good idea after a few cocktails.

Because really, what's a few thousand miles on foot to reach a place you've never been?

Do we really think any person who packs up their family and only the belongings they can carry and walks from their home in a far away land all the way to the U.S., or someplace else they've never been before, is doing it 'for the fun of it?'

If all the migration charts are correct, it seems no one is 'from here,' where ever your here might be. At some point in time, your ancestors migrated from one place to another, for reasons we may never know, and under circumstances I hope we are never faced with like war, a hostile political landscape, kidnapping or slavery, the environment or a natural disaster.

Who Are You, Really?

I believe it's time we all come to terms with who we really are. Where we really come from.

In the short time I've been studying this, I've been having this thought.

What if we're are all where we are meant to be?

Our pasts and those of our ancestors have all led to this moment in your life. It has put you where you are right now.

What are you going to do with it, this better life your ancestor created when they left the place they were, to come here to put you in this place, where ever you may be, right now?

Even though many of us are in a place because of the choices of others during moments in time we do not know the truth about - because we've chosen to ignore and/or recreate our history - I think we are all in need of a hard reset.

Instead of being angry over the past, something we cannot control, and in some cases isn't the true story, it's time to just stop. Stop bringing the past into the present, or projecting it onto the future.

I realize some with say I don't understand what it means to be in a place where you're not meant to be. That the reason you're here is because something awful happened to your ancestor. It was not their choice to come here. It might not have been their choice to even have you. But here you are.

Yes, here you are. Here we all are. Living the choices of people we probably never knew, and might not know from the history we've been taught.

But here's the deal: Today you are here. Now What?

Find Out Who You Are

What if you discovered you're actually from a place that before this moment, you feared? That the people you were cursing just moments ago, are in fact, your people?

What if you suddenly realized your neighbors, the people on the road, the bus next to you, are in fact, your extended family.

Wouldn't you want the best for your family?

Have You Ever Thought About...

Have you ever thought about running for office?

Now is the time to think about it - again or for the first time. What this country needs are new minds and new eyes to see new perspectives and bring new ideas to the problems this country and the world are dealing with now and facing in our future.

And from my perspective, it needs more women in office.

There is the non-partisan group, She Should Run. This is a very interesting group and obviously on the right track. Then, if you're a woman and a Democrat, look to EmergeAmerica.org. Their goal is to increase the number of Democratic women in office. And for women under 40, there's Running Start.

Our biggest problem? We don't talk to our daughters about running for office when they're young. It's time we start planting these seeds in their minds too, just like we do our sons.

Here we are people. We are at a moment in time when we have a choice to make. When we have to make a choice.

We must get involved or we must accept the choices of others. Choices that will affect our individual lives whether we know it, understand it, or not.

We must first know who we are, at our core. So many people over the course have time have moved or been moved around this planet, we no longer know where 'we' began.  At any moment in history, an ancestor of yours may have been swiped from a small fishing village in Ireland and shipped to the south of France where he jumped another ship bound for the America's.

Then we must understand we are all right here, right now, for whatever reason - we are where we are meant to be. Accept it. Be grateful. Then take pride in knowing you will make your ancestors proud and make whatever suffering or sacrifices they made, worth it. Take responsibility, take ownership of your life, your future.

Understand we are all the same, humans, flesh and blood. The outer parts, our languages, the color of our hair or eyes, or where we come from are nothing more than the wrapping. We all desire to be happy. To be safe, to provide for our loved ones. To laugh. To Love.

We must put aside what separates us, all of it. We must be able to step forward and take on the bigger problems in the world. But we'll never be able to do anything until we learn our true history.

Other Articles by Nanci Arvizu

Who Is Happy?
What determines, defines happiness? Is it having the most stuff? Are people living "the good life" happier than those living in a blue colared world?

When Anger Becomes Pain
Anger is everywhere; TV, news, movies, malls. Go out in public and you're sure to come into contact with an angry display to some degree.

NanciArvizu, It'll become even more important to know our history and ourselves if we become the interplanetary species that Elon Musk feels that we can be since he presciently researches the quality of life on Earth through his electric car and ocean mapping interests and on Mars through his proposed colonizations and rocket recyclings. 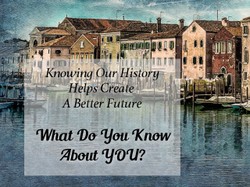