Best described as the Renaissance man due to his quench of curiosity and invention; while his large paintings particularly the Mona Lisa is on the wall of the famous Louvre Museum.

Born as Leonardo di ser Piero da Vinci, a renowned Italian painter, polymath, architect, musician, scientist, mathetician, considered to be the one of the greatest painters of all time and perhaps the most talented person had ever lived.

Italian painter, sculptor, musician, scientist, mathematician, engineer, anatomist, writer and botanist whose known as the archetype of Renaissance man with multifaceted talent. His scope of interest were precedent that makes him mysteriously remote.

Da Vinci was born in April 15, 1452 at the Tuscan hill town of Vinci, Florence, Italy. He was the illegitimate son of wealthy legal notary Messer Piero Fruosino di Antonio da Vinci and a peasant woman named Caterina. He educated in the studio of renowed Florentine painter Virrocchio. He spent his early five years in hamlet of Anchiano his mother's hometown.

In 1466, at the age of fourteen he became an apprentices in many famous Italian painters like Andrea di Cione known as Virrocchio, Domenico Ghirlandaio, Perugino, Botticelli and Lorenzo di Credi. By the age of twenty, he qualified as a master in the Guild of St. Luke, the guild of artists and medicine.

One of his first major works is his earliest drawing called the Arno Valley in 1473. It has been written that Leonardo "may be the most universally recognized left-handed artist of all time", a fact documented by numerous Renaissance authors, and manifested conspicuously in his drawing and handwriting.

Leonardo was a most talented musician, when he created a silver lyre in the shape of a horse head.

Perhaps fifteen of his paintings survive, the small number due to his constant, and frequently disastrous, experimentation with new techniques, and his chronic procrastination.

Created by Leonardo da Vinci in 1500's known as the Mona Lisa or "La Gioconda, the laughing one. Mona Lisa is named for Lisa del Gioconda a member of the Gherardini family of Florence and Tuscany and the wife of wealthy Florentine silk merchant Francesco del Giocondo.It is arguably the most famous and iconic painting in the world.

Leonardo is revered for his technological ingenuity. He conceptualised a helicopter, a tank, concentrated solar power, a calculator,the double hull and outlined a rudimentary theory of plate tectonics.

Leonardo kept his private life secret. His sexuality has been the subject of satire, analysis, and speculation. This trend began in the mid-16th century and was revived in the 19th and 20th centuries, most notably by the famous psychologist Sigmund Freud.

Modern descriptions and analyses of Leonardo's character, personal desires and intimate behaviour have been based upon a various sources: records concerning him, his biographies, his own written journals, his paintings, his drawings, his associates and commentaries that were made concerning him by contemporaries.

What can you say about Leonardo da Vinci?

I'm also fascinated by da Vinci. I wonder what he would have done in modern times.

He was an amazing artist! 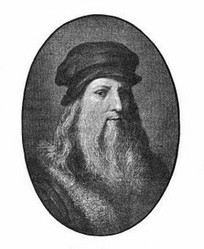 Leonardo: The Artist and the Man
100%  9   6 KathleenDuffy
Famous Painters