Two months ago we bought the Melissa and Doug Deluxe Wooden Folding Princess Castle for our daughter. For two months it has been very easy to find her. Wanna know why? Read along.

The Perfect Princess Castle for my Little Princess

The past two months we observe some amazing changes with our daughter. We always know just where she's going to be. In her new folding Princess Castle. I have never seen anything like it.

Usually when you buy a toy like this you don't think it's really going to last for very long, but in our experience, and apparently in the experience of the many reviews I read before buying it, it can last for years and still look good. I have seen reviews where the reviewer has owned the Princess Castle for three years and says that it looks almost as good now as it did when I got.

We bought it for our four-year-old, Susan. She's a delightful little girl and you would love her. On her birthday morning, it was almost like Christmas. She saw a huge box in the living room wrapped in gift paper and knew it was for her. I have never seen her so excited.

We allowed her to unwrap her Princess Castle, with our assistance of course, and then we unfolded it to help her set up. The castle is made of wood and has all the towers and flying buttresses a Princess Castle should have along with a flag which attaches by magnet. It's really spectacular when it's set up. You'd almost think you are at Disneyland. There are two removable turrets and even a working drawbridge.

It does not come with furniture. However, furniture can be purchased separately. Now, I haven't actually done this yet, but I did read that the furniture that's designed for it works pretty well with it plus there are other companies who make furniture that is slightly smaller that fits perfectly into this Castle. It's something that certainly seems worth looking into.

Actual Measurement of the Melissa and Doug Castle

Read this if you dont wanna be surprised

The dimensions were almost surprising when we first opened it. We read what the dimensions were but we never really considered what that would actually look like. When it's closed, 18 inches wide and 15 inches deep. However, once opened, it's actually 36 inches long. That's 3 feet! It's 26 inches high, including the flag.

When you compare this Princess Castle to all the junky plastic versions that are out there, there really is no real comparison. It's that much better.

They are having a Sale and Free Shipping Promo!

15% OFF Any Order At Melissa&Doug.com! Not Stackable w/Other Offers! Code: take15! Click Here!

"Me and My Daughter Moments"

One thing I do plan on doing in the future is buy my daughter unicorns, princesses, and beautiful things to put in and around her Princess Castle. That is not to say she doesn't have some things to play with in her castle already,because she does.

I sometimes will spend a couple of hours just watching her play in the Castle in the living room, which is where we keep it. It's really fun to watch her come up with the stories that her little characters are living for her. Just the other day, she started acting out the Rapunzel story even though she doesn't have a doll with extremely long hair. What she does have is a wonderful imagination. Rapunzel was trapped in one of the turrets, and was awaiting the arrival of Prince Charming to rescue her. She went into her brother's room and borrowed a model horse we gave him about a year ago and placed one of her male figures on it to act as Prince charming. He came galloping around the corner and across the living room floor, only to pull up at the castle. She even remembered what he was supposed to say. "Rapunzel, Rapunzel, let down your hair." She nailed it perfectly. After the Prince said his lines, Rapunzel let down her imaginary hair, which the Prince naturally proceeded to climb. To make a fairy story short, the  Prince rescued Rapunzel and they both lived happily ever after.

On another occasion, all of her characters engaged in a tea party. I didn't think children even knew about tea parties anymore. It was cute hearing the conversations that she had her different characters having with each other. It reminded me a little bit of my own childhood. I'm her father and being a male, it was different, but when I was a little boy I remember having make-believe characters although mine never engaged in a tea party and were actually far more likely to be engaged in war. But the principle still holds true.

A child's imagination is a wonderful thing. I know that too soon she will grow up and be past creating stories with princes, and princesses.

But I plan on enjoying this part of her life while she is still innocent and happy for as long as I can. If buying a toy like the Melissa & Doug Deluxe Wooden Folding Princess Castle helps her enjoy her childhood, then I can't imagine a better gift for a little girl.

More Princess Castle To Choose From

Will You Buy A Princess Castle For Your Daughter This Christmas?

A look at some of the cutest miniature electronics like cellphones, laptops a... 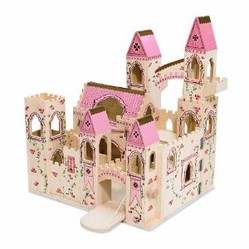 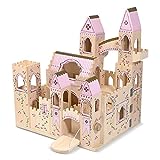 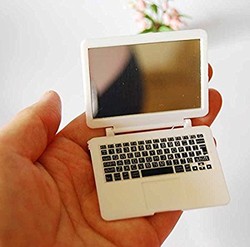 A look at some of the cutest miniature electronics like cellphones, laptops and tv's for decorating the interior of dollhouses.
100%  17   9 fitzcharming
Character Dolls

Does every single Disney Princess have to be hot to trot? Good grief. Why couldn't they leave Merida alone? She was SUPPOSED to be different!
Loading ...
Error!