Cities thrive, out of sight, beneath the streets of New York City and Las Vegas. They have no choice and it's dangerous.

Our ancient ancestors took to cave systems and caverns to escape predators and the winter chill. Yet the sewers, subways and subterranean utility passages beneath American cities are not the same thing at all.

These are dangerous, dark places, filled with psychopaths, addicts and seriously disturbed individuals; as well as those simply down on their luck. There are children in those depths, who have never seen the light of the world above.

This is real and they exist.

City Above, City Below

The infrastructure of any populated place is largely underground. There's more going on down there than you might think. 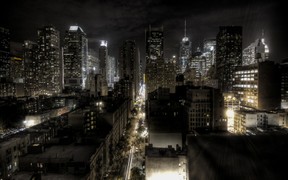 It's easy to imagine any metropolis as a living organism; just like ancient people saw goddesses in the landscape.

The roads and buildings are features upon the skin; skyscrapers soaring like follicles of hair. The inbound trucks and trains bring sustenance to its gaping mouth. Its rubbish is excreted and carried away to landfill.

The people move across it and, if we were unkind or hard on ourselves, they would be the parasites. Though, in this analogy, it might be better to think of us as the life-force, the energy, which truly gives this city its personality.

But what lies beneath? As with any body, there are the arteries and veins, which keep the blood-cells pumping. Subways and sewers; gas pipes and water channels; buried rivers and streams; and the remains of the original city, upon which later incarnations are built.

It's another world down there, encased in darkness and dangerous. It is where thousands of people have no other option but to live.

Entering the World of the Mole People

"Give me your tired, your poor, your huddled masses yearning to breathe free." 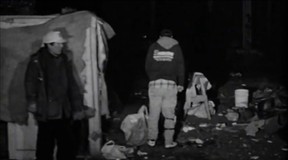 When sociologist Jennifer Toth ventured into the tunnels, in search of the near mythical Mole People, she expected to find a nightmare world of drug addiction, alcoholism and the very dregs of society.

She found them alright, but she also encountered teachers, social workers and other professionals. They were living testimony to the truism that many of us are only three or four pay-packets away from destitution.

She also discovered a young Puerto Rican family, terrified of being deported, if they resided above. The children were in their school uniforms. The father worked in construction. The mother did her best to keep a filthy environment clean and healthy. They had fled a nice, suburban apartment, when a neighbor learned that they were undocumented.

There was an enclave of children in a concealed room beneath a central station. It had once been a cellar but, for whatever reason, the doors had been bricked up. They'd found a wall with a hole in it for an entrance. Traumatized runaways huddled together; one tiny boy was practically paralyzed with fear, after witnessing his mother's murder.

Meanwhile, just one tunnel along, a roving gang of assassins would take anyone out for cash.

These are just some of the stories that she revealed in her book, The Mole People: Life in the Tunnels Beneath New York City.

Books about the Mole People (Tunnel People) of NYC

Sociologists have ventured into the tunnels to study how people live. Buy these testimonies to discover what they found.

How Many People Live in the Tunnels Under NYC?

There can obviously be no census of the homeless living beneath the streets of New York. No-one can give a definitive figure on the amount of people down there. However, there have been some educated guesses.

In The Mole People (p39), Jennifer Toth gave some statistics:

She was inclined towards the 5,000 figure, based on her own experiences and stories.

Anonymous Campaign to Feed the Homeless
'…& even when your government has completely abandoned you. Expect us.' The movement works to help the less fortunate.

The Occupy Movement and Homelessness
Protest camps like Occupy Wall Street hit the headlines for their political activism. They were also hubs of free shelter, food and medical treatment.
Mole people is a term used to refer to the homeless people living under large cities in abandoned subway tunnels and shafts.

The Lesser of Two Evils: The Homeless Beneath New York

Rats, live tracks, trains constantly rushing past, filthy conditions and lawless psychopaths roaming about. But it has its merits too. 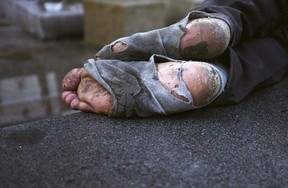 The tunnels provide shelter from the elements; and some protection from the more respectable of society's sadists.

Ordinary citizens are scared to go down there. Legends speak of cannibals and cut-throats. The latter, at least, is certainly true. But immersed in the darkness, it's easier to hide and no-one is prey to drunken city gangs using them as sport.

The homeless cling together, in pairs or desperate communities. Some have their own rules; own leaders. Jennifer Toth discovered an ex-social worker, who ran his tunnel in ways reminiscent of Apocalypse Now's Colonel Kurtz. No-one could eat, drink, leave the tunnel or move without his permission. But that was OK. He was a professional and he could keep them safe.

The police do occasionally raid. Charity workers penetrate the upper reaches. Government officials attempt to charter the depths. But they are only scraping up the tip of the iceberg, because the tunnels burrow very far underground.

As deep as she was able to penetrate, Jennifer found a school. Its pupils were children who had been born and raised in the dark. Some of them had never seen the surface. Those who had were terrified by the noise, the crowds and the sky. But they were well educated. Their teacher was fully qualified and she had materials smuggled down by runners. She'd merely lost the ability to cope with her life up above.

DVDs about the Tunnel People Beneath New York City

Buy these feature length documentaries to see with your own eyes the slum city underground.

DVD Documentaries about the Mole People of NYC

Watch these films to see for yourself what the reality of life is like for the homeless communities under New York City.

The Tunnel People of Las Vegas

It's not just New York City where the homeless congregate underground.

With all of the publicity given, in films and books, to the Mole People of New York, it wasn't long before others wondered about their own subterranean cities. Many have found them too, including a reporter in Las Vegas, USA.

Matthew O'Brien ventured into the miles of storm drains under the city. There he discovered hundreds of make-shift homes, built where its residents face the constant fear of drowning. These vast tunnels were, after all, constructed to save the city from desert flash floods by channeling excess water underground.

He became so moved by what he found that he switched careers to become an advocate for the homeless; as well as a guide for social workers to come and aid the forgotten people. The stories that he uncovered became headline news, then were chronicled in his book, Beneath the Neon: Life and Death in the Tunnels of Las Vegas.

Thank you for reading. And welcome to Wizzley! <3

It's a fascinating story, isn't it? Made all the more thought-provoking because it is true and they are down there.

Wow, how did I miss this one? Definitely something to think about.

Hear, hear, Katie! I'm glad that it provided some food for thought. Thank you for commenting. :)

Very good and moving indeed, perfect for reflecting on a Saturday afternoon. There is so much need in the world may the compassion of us all rise to the occasion each and every time awareness is made of such sad circumstances.

I thought so too. Thank you for commenting.

I didn't know that about Bucharest. I know that over 100 children survived the Holocaust by fleeing to the sewers. While their entire families were taken to the Death Camps, they fended alone underground.

A very interesting article Jo. I remember watching a program a number of years ago about street children living in the tunnels and sewer beneath Bucharest, Romania. It was shocking to see young children having to live in such conditions

The 45 storey office block was abandoned close to completion. A soaring test... 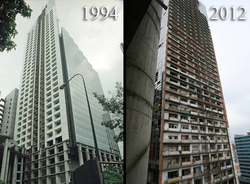 The 45 storey office block was abandoned close to completion. A soaring testimony to the collapse of an economy. It's now home to 750 homeless families.
87%  16   7 Ragtimelil
Homelessness