Anonymous Campaign to Feed the Homeless

'…& even when your government has completely abandoned you. Expect us.' The movement works to help the less fortunate.

Think Anonymous and hacked websites immediately comes to mind. This has, after all, be the persistent message of the media.

But that isn't nearly all that the collective is about. It isn't even all that hacking is about!

There are many, many Anonymous operations which occur without recourse to a computer - unless publicizing it counts. One of the biggest is the movement's propensity to provide meals for rough sleepers on the streets.

One of the most significant activist groups of the 21st century looks to provide food for those living on the streets. 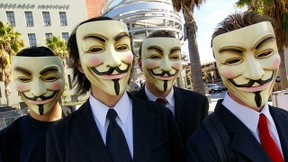 There is no doubt about the pulling power of Anonymous, as a force to mobilize people around the world.

It was this idea made cyber-reality which initially came up with the hash-tag #OccupyWallStreet. Other groups were involved; but it was the behemoth of the Anonymous publicity machine, which named the entire Occupy Movement.

The denizens of Reddit might have been the ones to think of an internet strike against SOPA and PIPA. It was arguably the support of Anonymous, which made that initiative huge. At least members of the Polish government judged that to be the case, when they donned Guy Fawkes masks in the aftermath.

These are just two examples from a whole back catalog of social issue activism. So what will happen now as the collective takes up the cause of the starving homeless?

This is how Anonymous introduced the world to its most current campaign.

The most up-to-date information about this campaign is on Twitter. Find it by clicking on the following hash-tags:

NB The last three are more general in their scope.

People Power Philanthropy Out on the Streets

#OpFeedTheHomeless requires each person to take it upon themselves to help out. 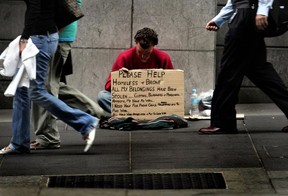 Anonymous is asking individuals to pro-actively take food to those without shelter.

This isn't a charity donation scheme with a central accounting house. No representative is demanding money. The concept is much more simple than that.

While some members of the movement are organizing soup kitchens, the call is for quieter action.

There is a press release, which spells it all out. The pertinent passage reads:

Every Saturday we are reaching into our own pockets and giving away food to the less fortunate.  Some of us will be feeding hundreds of people each week, but you only need to give away a single apple to join the cause.

This is followed with a request - not a requirement - that anyone participating does try to record it in some way. It could be a photograph, a blog, a Tweet or film footage. The recommendation is to do it anonymously, perhaps donning the famous Guy Fawkes mask, as this should not be a platform for personal recognition nor gain.

The object is to get the message out there, so that others know to join in. It's what Anonymous does best.

Ideas for Joining In

(More will be added as they come in.)

Facilities to Help the Homeless Provided by Bertram Community Police

Filed under the hashtag #OpFeedTheHomeless, an activist was invited to see what a Texas police department are doing for their local homeless people.

Unfortunately for this initiative, Bertram City Police are under pressure from Mayor Winnette Morris to close it down. Tightening city finances have seen the five officers running it ear-marked for redundancy. This sparked a walk-out by three council members; as well as the censure of Anonymous.

Activist @BrknSdwlkFrm also called upon people to contact Bertram's mayor to protest the closure, as part of the Operation Feed the Homeless campaign.

Will You Be Joining in Operation Feed the Homeless?

The Mole People: Homeless Communities Underground
Cities thrive, out of sight, beneath the streets of New York City and Las Vegas. They have no choice and it's dangerous.

The Occupy Movement and Homelessness
Protest camps like Occupy Wall Street hit the headlines for their political activism. They were also hubs of free shelter, food and medical treatment.
Updated: 03/15/2013, JoHarrington
Thank you! Would you like to post a comment now?
6

Ah! In that case, one of your members is doing their job. I was asked to look at this operation and given links to find more information. This is how I knew to write about it.

Good luck to you all and I will pop in to say hello.

This is an op some anons and myself came up with about 6 months ago. However this is the time to step up and start doing justice and better the world. If the government isnt helping we will. It was and is the first op to come out of the new Anon IRC Network Voxanon. Phase two is coming out shortly. To talk to us directly feel free to visit the irc network. The info is on my first post. Thanks again for the support. We r all anonymous. Stay tuned

You're very welcome. Are you looking to take part too?

I can't take any credit for the idea. It's all Anonymous. :)

This is a great idea, Jo. Thanks for writing the article.

Hiya. I've been perusing the Tumblr account. I'll come into the IRC in a bit. 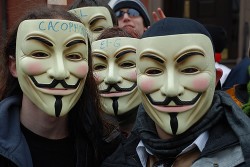