Balloon popping games from a Bloons series are becoming increasingly popular. This post briefly reviews the most popular ones.

All Bloons games feature the same hero - a little monkey who is trying to launch arrows, bombs or other weapons such as a returing boomerang in order to destroy (pop) enough balloons to advance to the next levels. Balloons are usually arranged in many different shapes and styles and players need to be smart to win. Some balloons are more powerful than others (for instance when you hit the pink balloon with an arrow symbol, all nearby balloons will be destroyed). On the other hand some balloons must be avoided at all cost. For example if you hit a freezing balloon, all surrounding bloons will freeze and you will not be able to destroy them. There are virtually hundreds of different levels in each Bloons game. Some of them are very easy while others tend to be much more difficult as you only have one shot or have to hit a special balloon to destroy them all with a single shot. Probably the best game for anyone wanting to see a variety of balloon popping styles is Bloons 2. This game features more than 100 different levels and puzzles for everyone.

Tower defense games involve strategic skills as you have to build towers to destroy all enemies before they reach your base, which is located on the other end of the road. As far as Bloons games are concerned, there are many tower defense style games, featuring balloon popping. Similar weapons as in bloons classic are made available to players but this time they need to be deployed before the enemies appear. This makes these games much easier to play as players do not need to aim and after the tower deployment they virtually watch the balloons get destroyed. If you want to try some games from this series, check out Bloons Tower Defense.

Connect three games are about item swapping. The items can only be swapped if at least three similar items can be arranged next to each other by a swap. These games are very popular and usually have a great story line, which makes them even more attractive. Bloons game creators have taken advantage of this popularity and created a special connect three game called Bloons Pop Three. For any group of three similar items cleared from the screen players earn points. You can earn more points by popping special balloons (such as the ones with a bomb or arrow symbol). One little disadvantage of this game is the fact that it does not have any story to tell and it is not divided into levels. Therefore you can play this game as long as you wish and when you finish your progress will be lost. But if you just want to fight boredom at school or home this game is both funny and entertaining.

There are plenty of great free games like Club Penguin for children to play o...

Wizards in Wizard101 must choose a school when they create their character. T...

Mahjong games come from China. This post reviews some of the best Mahjong gam... 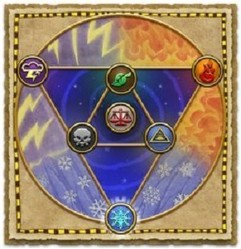 Wizards in Wizard101 must choose a school when they create their character. This Wizard101 school will impact the spells that you can learn and master in the Wizard101 universe. Pl
10%  0   1 Cromborman
Games for the Whole Family