Many people do not realise how expensive it is to fly a cat or dog from one country to another and Pet Passports have to be obtained.

One rule for humans and another for pets
Speciesism is a term that I would say can be illustrated well when it comes to rules and laws for humans as contrasted with those for pet animals such as dogs and cats. There is a legal document known as a Pet Passport that has to be obtained if a pet owner wishes to transport a dog or cat by plane from one country to another.
One big problem I have with this is that a different set of rules are being made and enforced with regard to animals as opposed to people. Humans do not have to be subjected to medical treatment before they can board a plane but cats and dogs have to have this.
And yet the diseases and parasites it is argued this is designed to stop the spread of can be carried by humans just as easily as by animals. Humans are being given illogical and preferential treatment. Those who made the rules that apply here were speciesists.

Pet Passports and the law

Legal requirements for flying a pet

I only found out about Pet Passports because I have been thinking seriously of leaving Tenerife in Spain and returning to the UK., and so I made some enquiries about what would be needed to be done for my cat to be able to travel. I was told, and the information is correct, that she would need a Pet Passport, and has to have a series of treatments by a vet to qualify.

What this actually entails is first of all a cat or dog has to be micro-chipped and vaccinated against rabies. Then about a month later a blood test is carried out to check if enough antibodies have been formed in response to the vaccine. If not then the procedure has to be done again.

Of course all of this has to be paid for, and if that wasn't bad enough, in my case I am personally opposed to vaccinations and micro-chipping of animals and humans. I would refuse these procedures fro myself so it makes me a hypocrite to have them done to an animal in my care that depends on me and that I love.

I have read too that microchips embedded in animals have sometimes been thought to have caused cancer. This doesn't surprise me because it is an artificial object that the body will try to get rid of I would have thought.

The usual line that is given to convince people that chipping is a good idea is that if the pet gets lost it can be traced more easily because the chip will store its individual details. In the case of my cat this does not apply because she is a house-cat and never goes outside anywhere so could not get lost. Unless, of course, they are suggesting that the flight system is so badly organised that cargo goes astray!

Tenerife in the Canary Islands

Find out more about pet vaccines

The rabies vaccine is to protect against a disease she has no possibility of contracting. My cat never comes into contact with other mammals that could carry the virus so how could she get bitten and catch it?

I have never heard of any cases of rabies on this island and the disease is as good as eliminated from the UK too. So where is the possibility of her catching rabies supposed to come from?

Then after all that, before entering the UK a vet has to confirm that the animal has been chipped and vaccinated.

Finally, just before a cat is allowed to fly it has to see a vet in the period of 48 hours beforehand when it is treated against ticks and tapeworms. It is also checked over and the vet has to issue it with a clean bill of health in order for it to travel, at least these were the rules at time of writing in 2011..

Again I would ask why an animal that has no ticks and no tapeworms has to be treated for these parasites that are not present?

Although I am told otherwise by some friends, I am certain that my cat will hate all of these treatments, and I am worried that she might suffer allergic reactions to them too.

I am certain that if humans were told they had to have a vaccination against rabies, a microchip implanted,  that they must have a blood test, further that they were not allowed to fly for another six months, and finally that they needed drug treatments for ticks and tapeworms before they could board a plane, they would be horrified and there would be a public outcry about this! Even more so if they also were expected to pay a lot of money for all this!

Find out more about cats

Money - the root of all evil

More money is needed for a flight ticket for an cat or dog to travel too. And it is a lot of money, far more than for a human! I have been quoted the minimum fare I can expect to pay for a cat to fly one way from Tenerife to the UK is 575 pounds sterling. That is double what it would cost for a person to be able to fly on the same route. Money for the airlines!

I found all of this hard to believe but there was another shock in store as well. Not all airlines allow you to personally book you pet into the cargo that is going in the hold of the plane, even if you have got the Pet Passport sorted out and paid the extortionate fee. In some cases you need to enlist the services of a travel agency that specialises in dealing with pets. They take your dog or cat to the airport on your behalf and book the animal in so it can be put on a plane.

This service comes at yet more cost. Some friends of mine told me (and as I found out they were indeed speaking the truth) that I would be lucky to see much change out of £1,000 to pay for everything needed to fly a cat to the UK from Tenerife.

I don't have that sort of money so am at present unable to go any further with this plan even if I wanted to and agreed with it.

What amazes me too though, is how many people seem to see nothing wrong with any of this and just go along with it all, as well as advising me to do likewise. It is another example of the police state/nanny state we live in.

People don't seem to be able to see that this is unfair treatment of another species and treatment they themselves are not expected to undergo, merely because they are humans. As I said before, surely this is speciesism in action?

UPDATE: Since this was first published in 2011, DEFRA have changed the rules and it is now easier for pets to be flown to the UK though still very expensive.

Links about flying your pet abroad

What pet owners need to know

Microchips linked to cancer in animals 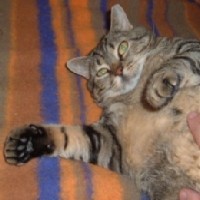