Perfect gifts for Phantom fans, or table decorations for Phantom of the Opera themed parties. Come on and embrace the music of the night.

'Phantom of the Opera' might have started life as a French newspaper serialization in 1909. But for most of us, it all began in 1986, when Andrew Lloyd Webber adapted Gaston LeRoux's story into a West End musical.

It's not only the highest grossing show ever, 'Phantom of the Opera' is the most successful entertainment event of all time.

Apparently over 130 million of us have thrilled to this dark and sinister romance. If you have a fan of the show at home, then I have some items you might want to check out.

Phantom of the What?!

For those of you who have been living under a rock for the past thirty years, here's a quick apprisal to bring you up to speed.

It's 1881 at the Opera Populaire (thinly veiled Paris Opera House) and business is booming. This is the place to see and be seen. This is where the great and good in society all congregate to enjoy a show in glittering surroundings.

(Think X Factor, but with bigger dresses and a soprano whose pitch can shatter glass.)

However, beneath the shiny pretties, a dark secret has all the staff quaking in terror. There's a shadowy figure, who always takes a certain, enclosed box to watch the show. Then messages turn up filled with 'advice'.  If not followed to the letter, then people tend to randomly die.

Into the middle of all this comes a sixteen year old Swedish soprano named Christine Daaé. She has a rare talent, but she's inexperienced.

As far as the opera directors are concerned, she's chorus material. As for the prima donna, Carlotta, she barely knows that Christine exists.

But the Phantom has noticed her. His letters highlight Christine's astounding talent, then increasingly demonstrate that he's fallen in love with her. Carlotta is ordered to step down, so that Christine can take the lead.

Recap:  Sixteen year old, innocent girl now being stalked by psychopathic entity. Star of the show to go, or someone's going to get killed.

I won't give away the ending.  You'll just have to see the show, watch the movie or read the book. It's very exciting though.

Now onto the lovely things that you may buy me at any time you choose. Phantom of the Opera decorations and other such accessories.

Phantom of the Opera Monkey Figurine

Fans of the musical will already be wiping a little tear from the corner of their eye. The Monkey music box, in Phantom of the Opera, is the focus of a very poignant plot-line. Its appearance tips terror into tragedy and transmutes panic into pity.

I'm sure I'm not alone in hearing a lofty voice sound from memory, 'Lot 665, ladies and gentlemen - a papier-mache musical box, in the shape of a barrel-organ. Attached, the figure of a monkey in Persian robes playing the cymbals. This item, discovered in the vaults of the theatre, still in working order.'

This replica is not papier-mache.  It's resin and 6.8" tall. But the cymbals move and the music box plays Masquerade.

Here it is in action!

Those who wish to have more functionality out of their Phantom Monkey Musical Box will not be disappointed.

There is a larger version, with a pull-out drawer in the base for small trinkets, rings and the like.

This one is an even closer replica to the show's original, in that it features a hand crank to make it move. (The other one switches on underneath.) Again the arms are animated and the tune is Masquerade.

The Phantom of the Opera Monkey with Hand Crank stands (well, sits) at 12.25" tall, which is twice the size of the smaller version. Unfortunately, it's also twice the price.

Both monkey figurines are produced by San Francisco Music Box Company. They arrive in a carefully packaged Phantom of the Opera gift box.

This iconic scene from Phantom of the Opera is highly collectible and likely to rise in value over the years.

Only a limited number of these music boxes were created to mark the 25th anniversary of the show. There are just 2,500 of the pieces in existence, which means that collectors are eventually going to be fighting over them

Each one has been hand-sculpted, then hand-painted, in order to ensure the quality. Once again, San Francisco Music Box Company is behind them.

Given the pose, it will come as no surprise to Phantom fans to know that the tune played here is Music of the Night. Let's remind ourselves how that sounds with a quick Phantom fix.

The Music of the Night

Phantom of the Opera Journey to the Lair Figurine

Musical Figurine of the Phantom and Christine

Inspired by that same classic Phantom scene, Journey to the Lair also plays Music of the Night.

This one isn't limited edition, but it is exquisitely crafted. The whole figurine - including boat and base - stands at 7.75" tall. It's accurate down to the tiniest detail.

While the monkey may tug at the heart-strings and the embrace is the signature pose, I like this one best.

This is the point in the plot where I really begin to pay attention. There's so much to consider, that I haven't watched it the same way twice. The pathos, the danger, what each must be thinking at the time - that to me is what makes Phantom so delicious!

Phantom of the Opera Journey to the Lair Shadow Box

A variation on the above theme is in this framed shadow box. I prefer this to the free-standing one, as it transmits the darkness much more literally.  Plus the frame looks a little like the ornate boxing around an opera stage.

That just seems much more symbolic to me, conveying more of the environment that it's here to portray.  It doesn't hurt that the box allows for more actual background too. Very atmospheric.

This music box plays The Phantom of the Opera Overture.

So far the Phantom of the Opera musical boxes have been big on details and atmosphere, but low on use beyond mere decoration.  (Which frankly, in the case of the shadow box, would be fine for me!)

This decorated Phantom music box switches that 180 degrees. The lid opens to reveal an oval mirror on its underside. The dark cavity within will hold rings and other small valuables.

It's not a large item, measuring just 6.7" wide with a depth of 3.5".  Therefore it remains fundamentally a music box, not a jewellery box, playing Music of the Night.

The Phantom of the Opera Music Box is another 25th Anniversary commemorative item.  Hand-crafted in resin, numbers were once again restricted to only 2,500 pieces. In other words, this could be an investment, as future fans clamour to add it to their collections.

Finally there is a musical box actually marketed as somewhere to place your jewellery. But don't expect to put much in here.

The dimensions of this cute Phantom trinket box are just 4.3" x 4.2" x 3.6". You'd be hard pushed to get more than a ring and a couple of pairs of ear-rings in that!

However, what the piece loses in space, it more than makes up in charm. The figurines of the Phantom and Christine revolve when the lid is opened.  The tune is the ubiquitous Music of the Night.

The fine detail, as with all the others, is immense and beautifully sculpted.

Which soundtrack do you have? I've got the one to the movie and one from the '80s. Both very different, but equally great.

Ah! Just read to the end of your comment. I'm assuming that yours is the movie one too.

I have the sound track! :D I love the monkey figurine.

I have only ever seen the newer version, way too many times. I really like the movie. But, I have had people tell me the one from the 80's has a lot of things about it that was better, the musicality being one of them. I've thought about watching that make of it one of these days. ^^

Oh no! Go and see it now! You'll be singing those songs for the rest of your life!

Never seen the phantom of the opera, but the figurines look cool.

Beautiful gift ideas for Phantom of the Opera fans. Collectors of memorabilia...

It's a love that transcends the grave and ignores 'until death do us part'. T... 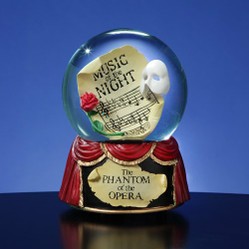 Beautiful gift ideas for Phantom of the Opera fans. Collectors of memorabilia from the musicals will be sure to find a place on their shelves for these Phantom water globes.
63%  6   6 JoHarrington
Halloween Decorations 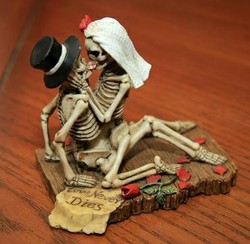 It's a love that transcends the grave and ignores 'until death do us part'. These two will not be parted by anyone nor anything. Their Halloween figurines tell their story.
Loading ...
Error!