After years in obscurity Pierre Adolphe Valette is now recognised for his unique contribution to British art. But what was a French Impressionist doing in Manchester?

Valette is one of those once-forgotten artists who have been hidden from history, at best appearing just occasionally as a footnote to some obscure art history paper. However, an exhibition of Valette's work on show at the Lowry Gallery in Salford in 2013 helped enormously to raise his profile.

Valette was French, an impressionist painter, yet he lived in Manchester! Why?

And, even more intriguingly, he was tutor to our own L S Lowry, painter of England’s industrial north. Valette’s influence on Lowry is plain to see and Lowry gladly acknowledged it.

So Valette was a hidden gem of a painter, unappreciated until recently. This means that there are few images in the public domain, and little written about him - so please follow the links to his works given here so that you can experience his unique talent.

The Early Life of Adolphe Valette

Pierre Adolphe Valette was born on 13th October 1876 in Saint-Etienne, in the Alpes-du-Haute-Provence region of France. Despite it being an industrial town specialising in silk and metal production, the town officials were keen to establish Saint-Etienne as an important cultural centre.

To this end, the Regional School of Industrial Arts  trained its students in drawing and design, creating a pool of skilled labour for its manufacturing industries.

In 1891, aged just fifteen, Valette enrolled at the Ecole where he studied engraving. He quickly became recognised as a brilliant student. Later he found work in Lyon as a professional engraver, at the same time pursuing his studies at the town’s Ecole des Beaux Art.

In 1900, moving yet again but this time to Bordeaux, Valette studied in the evenings at Ecole Municipale des Dessins de la Guillotiéres, whilst holding down a job during the day.

Valette had always dreamed of visiting Japan.  Artists had been deeply affected by Japanese prints which had arrived in France, often as packaging for imported goods. They took the artistic world by storm.   So this could have been a factor which influenced Valette's desire to explore Japan.

But lack of money and the Russo-Japanese war of 1904 were factors that prevented Valette from realising his dream.  So, possibly inspired by Monet and Pissarro  before him, Valette escaped to London.

For a while Valette studied at Birkbeck College, London, before moving up to Manchester. Again, his motives for the move are unclear. Here he worked designing labels for cotton goods destined for the Far East – so a little part of Valette may have reached Japan!

In 1905 Valette began to study at Manchester Municipal School of Art. Once again Valette’s talents were obvious to his tutors, and he was offered the post of Master of Painting and Drawing, which he gladly accepted.

If you click on this link from the BBC website you will see not only paintings by Valette, but a lovely photograph of the tutor with his pupils who absolutely adored him.  This was because almost immediately upon his appointment the rigid atmosphere of the classes became relaxed by Valette’s easy-going French bonhomie and professionalism.

He would work at the school from 1906 to 1920 and during this period produced his great paintings of his adopted city. The iconic painter of northern industrial landscapes, L S Lowry who was one of Valette’s students. confessed that Valette….”had a freshness and breadth of experience that exhilarated his students”. (1)

In 1909 Valette married a fellow-student and artists’ model, Gabriela de Bolivar, a Venezualian. They would have eight years of blissful marriage until her death from consumption in 1917.

It was a city in transition which Valette captured so well.

When Valette painted his Manchester scenes it was the Edwardian age and the city was on the cusp of change. His works show hansom cabs juxtaposed with motor cars and electric lights alongside flickering gas lamps.

Valette was deeply influenced by the French Impressionists and, like them, worked outside, sketching rapidly. Like Monet, he celebrated the age of steam. His painting, Central Station, Manchester echoes closely Monet’s Le Gare Saint-Lazure.

From 1912 Valette began to adopt a lighter palette and produced moving portraits of his family and friends as well as French and English landscapes.

A Nostalgic Musical Tribute to Adolphe Valette featuring The Chameleons

It shows Manchester as it is now, merging with Valette's paintings

The First World War changed Valette’s working life. As his fellow teachers were called to the Front, Valette’s workload increased. This trend continued until 1919 when Valette was absent most of that year through illness and exhaustion.

His beloved Gabriela had died from consumption in 1917 and he himself had undergone a number of operations. His son, Peter, born in 1910, died of meningitis when he was eighteen. One can only imagine the devastating accumulative effect these deaths would have had on Valette’s fragile physical condition.

In 1919 Valette had married his second wife, Andrée, and in 1920, despite illness, had been appointed Principal Master of Painting. However, exhaustion had forced him to retire. He continued to work voraciously, even after his return to France in 1928 when his mother died and he had to care for his sister.

For the rest of his life his wife, Andrée, supported Valette until his death in April 1942 when he died from kidney disease at the age of sixty-five.

In his book, The Painter of Modern Life, the French poet, Baudelaire, encouraged artists to turn their attention to the subject of modernity. Adolphe Valette’s paintings of Manchester streets and canals appear to have answered that call.

Like Atkinson Grimshaw and James McNeil Whistler, Valette captured the strange, ephemeral longing and nostalgia created by the new modernity.

A good collection of Adolphe Valette’s work can be seen at Manchester Art Gallery.

A book published in 2006 to critical acclaim, which this writer has not consulted, is Adolphe Valette by Cecilia Lyon (Phillimore & Co Ltd,2006).

John Martin - Victorian Painter and Printmaker of the Sublime
Inspired by the turbulent times of the Industrial Revolution John Martin was famous for his vast canvases showing humanity dwarfed by the awesome power of wild nature.

L S Lowry - Painter of a Lost Industrial North of England
The first major exhibition of landscapes by L S Lowry since his death in 1976, took place in the summer of 2013 at London’s Tate Britain Gallery.

Hi Abby - I so agree - his work is beautiful. thanks for commenting! :)

Oh thank you lovely lady !! You are so generous!

Oh my! This is a dilemma. Should I pin this to my ARTISTS I Fancy Pinterest board or my BIO-Snapshots board? Meanwhile, I shared this and another one of your articles by backlinking to my Wizzle about impressionism. Viewing Valette's work, I can see why his students loved him.

He was a very talented artist. Hopefully one day he'll get the recognition he deserves.

I really like the examples of his work that you've chosen. 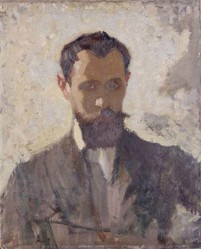 Monet's paintings of the River Thames tried to capture the fleeting effects of fog and mist on London's commercial and industrial watery highway.
62%  8   5 KathleenDuffy
Famous Painters