Quiet Loner: A British Protest Singer Takes on the Bankers

Performing under the pseudonym of Quiet Loner, Matt Hill strikes a powerful chord in protest against all that's wrong in British politics. He's very good.

I wasn't actually in the LeftField marquee at the Glastonbury Festival in 2013. I was just outside the door, basking in the sunlight. But the music brought me right inside.

As soon as the set was finished and the crowds dispersed, I made a beeline to the merchandise stall. Quiet Loner was standing alongside with an aspect of overwhelmed delight. "Hello!" I hailed him. "You were amazing! What's your name? And do you have a CD?"

He sounded almost shy as he informed me that his name is Matt, and apologetically pointed towards his 'Greedy Magicians' album. No apology needed. It's wonderful.

It was always going to be a fairly tough gig. Matt was playing alongside Billy Bragg and Amanda Palmer, yet he still managed to shine. 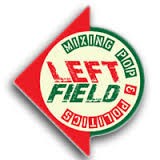 Organized by Billy Bragg, the LeftField is where politics gets an airing at the Glastonbury Festival. As the name implies, those views are distinctly to the left of center.

Quiet Loner fitted in perfectly. He was singing to the choir and we were always going to welcome those kind of politics. But that didn't mean that he had it all on a plate.

It was an afternoon blessed with brilliant sunshine. The denizens of the Glastonbury Festival had more than enough distractions outside a dark marquee. Moreover this wasn't solely Quiet Loner's gig. He was playing in the Radical Round Up, which included Billy Bragg, Amanda Palmer and Sean McGowan. For their fans, this could almost be the commercial break, where we nipped out to roll another cigarette.

But it wasn't. Even amidst such illustrious company, he kept us right there. It wasn't Billy nor Amanda's CD which I rushed to buy afterwards. It was the Quiet Loner's. He was that good.

Matt Hill tells tales, but they are about people and places we should never forget. 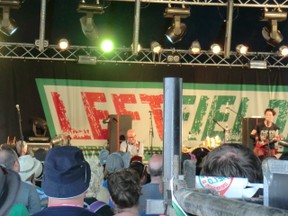 I was sold at Aberfan, but when he name-checked the Miners' Strike and half a dozen other touch-stones in history, I was listening very intently.

Like some ancient bard, Quiet Loner uses his songs as a story-telling device. You reach the end feeling not only entertained, but educated too.

Even if you missed a reference or two, there's a note there to research later.

Quiet Loner's stage performance might be understated, but that's because he's letting the music do the work. His lyrics emerge with a heart-breaking honesty, or rise to a rallying call applied with unstinting precision. They command attention. Hearing the final note is like awakening from a dream. He takes his audiences to wherever they need to be, in order to practically become eye witnesses to history.

He's apparently been active since 2004. I don't know how I've missed him thus far!

The eponymous 'Greedy Magicians' are the bankers, who have plunged his native Britain (and the world) into a prolonged recession.

Anyone can sit in a recording studio and knock out an album. Quiet Loner wanted much more than that. 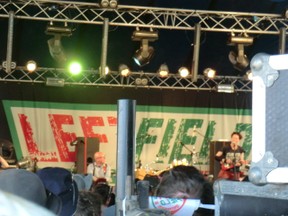 I was delighted with the songs alone, but when I read up on it, I was thrilled. Matt Hill really made an event out of the recording and release of his latest album.

Quiet Loner is what happens when a political historian learns to play a guitar. There are instruments on Greedy Magicians which date from the 19th century. The sleeve notes are lifted from his grandfather's notebook written in 1934-5.

The album was recorded in front of a live audience, lit only by candles, in a church in Salford. The atmosphere permeates.

Audience members were each given a badge, upon which was written a name of someone who made a stand in history. They were treated to cakes upon which were iced current political slogans. It demonstrated how we are not divorced from our history. We're still living it.

My personal favorite, amongst his songs on Greedy Magicians, is We Will Not Forget. It's fundamentally a list of all that's to celebrate (or to continue the struggle to rectify) in the history of British protest. It reminded me of just how far we've come. It's a tune to blow away the cynicism and to renew the will to fight for a better tomorrow.

In the current political climate, such things are balm to a disillusioned soul.

I'm listening to it as I write and enjoying every tune.

I nodded wry amusement at that too. And you're very welcome. I really enjoyed my introduction to his work. I hope you enjoy the album too. You can hear it for free on his website.

'Greedy Magicians'? :) I couldn't think of anything more fitting. Thanks for the introduction to his work, Jo.

I do spend much of my festival at the LeftField each year. It's definitely one of my favourite areas, if not THE favourite.

Even though I didn't hear him play, I've decided that the Left Field is the greatest part of the Glastonbury Festival. I like their style. 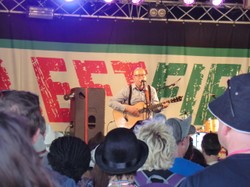 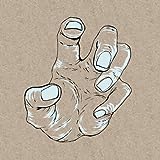