A look at one of Lucio Fulci's last -- and not so classic -- movies.

Legendary Italian horror director Lucio Fulci made several great, important and classic genre movies -- a handful of classy gialli, the famous zombie series, and more. However, in the middle of the 1980s, his movies suddenly became more rushed and uninspired. The majority of Fulci's last movies are rather unknown. Here's a review of one of them- 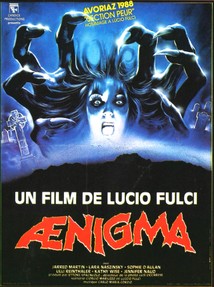 Earlier this year, I spent a couple of days watching a handful of the movies Lucio Fulci directed the decade before he passed away; movies I had never seen before -- and after having seen them, it’s easy to understand why they’re either forgotten or ignored.

The legendary Italian Fulci (1927 -- 1996) was of course one of the directors who made me really interested in horror and in the people behind the movies. The guy was huge in the early 1980s and his zombie movies and violent gialli are fondly remembered and still popular among fans. The reason is not only the gore, there’s more to his movies; they possess certain qualities that fascinate, they’re atmospheric and hold up well when you re-watch them -- which I tend to to quite often. At least his most well-known opuses.

… But then we have those last movies … I just had a look at yet another Fulci movie I had never seen before; “Ænigma” from 1987. And no, this is definitely not a move I’ll rewatch once a year or even once a decade.

This is an Italian-Yugoslavian co-production that takes place in Boston, Massachusetts, but besides a couple of exterior shots filmed on location, the main bulk of the movie was made in Belgrade, Serbia. Most of the names before and behind the camera are Yugoslavian. 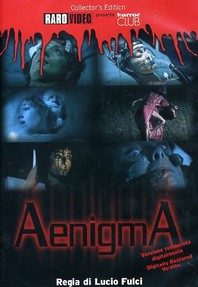 “Ænigma” opens with a prologue, in which a couple of eeevil students at a college for girls, plus their boyfriends, play a prank on a poor girl they bully. They dress her up and hook her up with a hunk, only to later make fun of her. The bullied girl runs off, is hit by a car and ends up brain dead in a hospital.

A couple of months later, and new student, Eva Gordon (the gorgeous Lara Lamberti from Lamberto Bava’s “A Blade in the Dark”) arrives to the school -- and things very soon become weird and horrifying. The students responsible for the accident end up dead in the most bizarre ways: they have visions of being killed in different, creative ways. A gym teacher’s reflection in a mirror comes out and strangles him, a sculpture comes alive and kills a girl, and so on. The causes of death seem natural, there’s no evidence of violence, it seems like the gym teacher had a heart attack.

Young Miss Gordon starts behaving more and more odd -- is she really the one she claims she is? Is she maybe possessed? Of course she is! It’s of course the brain dead girl who’s behind all this. She might be a vegetable, but she can still control things with her mind -- a plot element that made me think of the Australian (and very boring) horror movie “Patrick.” 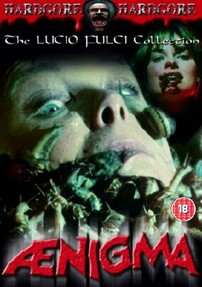 American actor Jared Martin from “Dallas” and a shitload of other TV shows plays a doctor trying to solve the mystery -- and for some reason, he also starts a relationship with Eva Gordon, who seduces him in like five seconds (Well, I wouldn’t say no either). He also has a very strange sex scene; a dream in which he’s eventually killed by Eva, who bites the poor fellow to death with her teeth -- while multi colored lights are flashing.

There really isn’t much to say about this movie. “Ænigma” is a very weak and silly horror movie. The dialogue is strange and awkward, and the girls aren’t at all convincing as Americans; they behave very odd and childish -- without being possessed.

However, the movie offers one absolutely amazing scene. One of the pretty girls, lying in her bed, is killed by snails! Yes, snails. Not slugs, but snails. She’s covered with them. They’re crawling all over her, even inside her mouth -- and these are real snails. Don’t ask me how they manage to kill the girl. And why doesn’t she just get out of the bed and brush the small, slimy creatures off her body?

“Ænigma” may be pretty bad -- but I must say I rather watch a tacky Lucio Fulci movie than most of the stuff produced these days. Fulci himself pops up in a cameo, playing a journalist.