The late Bob Clark is mainly known as the creator of the "Porky's" comedies -- but he started out making horror movies. He's famous for the prototype slasher "Black Christmas," but his "Deathdream" (also released as "Dead of Night"), slightly inspired by "The Monkey's Paw," is a forgotten gem that's highly regarded among horror fans. 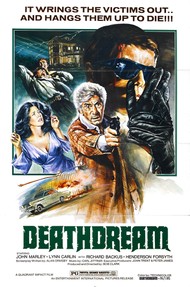 Back in the late 1980s, a friend of mine worked in a very small video store -- a little larger than a hole in the wall -- in my hometown. I’m not sure, but I think it was the very first video store in that town and opened already in the late ‘70s. Maybe I should add that rental video is a Swedish invention. In those days, you bought the movies in most countries. But not in Sweden.

What was really cool about this video store, Hvilans Video, was that they still had lots and lots of really old tapes, releases from the childhood of video. Movies you couldn’t find anywhere else. Movies I had no idea they had been released. Movies released by distributors that weren’t around anymore, companies I didn’t know had existed. In the dawn of video, lots of people jumped on the bandwagon and became video distributors. Most of them 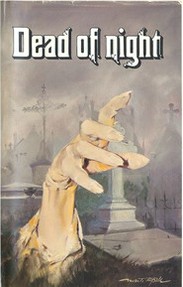 went out of business after just a couple of years.

I used to hang out in my friend’s store several days a week. He had titles like “Let Me Die a Woman”. “Blood for Dracula”. “The Man Who Came With The River”. David Cronenberg’s forgotten “Fast Company”. Lots of obscure Spaghetti Westerns.

… And one day I rented a movie called “Dead of Night”. This was the original title, but it’s apparently better known under its alternative title “Deathdream”. I remember the video sleeve: a close-up of a hand sticking out of a grave. This image, also used on the Danish release, had absolutely nothing to do with the movie, and I later discovered that this is some kind of stock image that has appeared on loads of horror paperback and magazine covers. 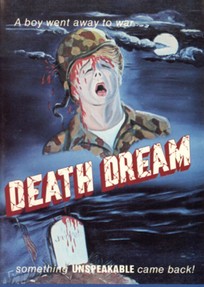 “Deathdream” was directed by Bob Clark, who also made “Black Christmas” and “Murder by Decree”, before striking gold with the Porky’s movies. Clark was killed in a car accident in 2007. “Deathdream” was written by Alan Ormsby, who had directed the sort-of-classic “Deranged”, written “Children Shouldn’t Play With Dead Things”, which Clark direct, and then went on to write movies like Paul Schrader’s “Cat People”.

I just re-watched “Deathdream” -- which is a Canadian/American co-production -- after not having seen it since I rented it over twenty years ago. I don’t really remember if I thought it was good or not back then, all I remembered was that I found it slow-paced and depressing in a creepy way. When I later read about the movie, I realized that it’s kind of famous, among other things because this was Tom Savini’s 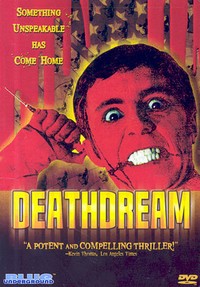 first movie as a make-up artist.

“Deathdream” is a spin on W.W. Jacobs’ classic short story “The Monkey’s Paw”, first published in 1902. Be careful what you wish for. Bob Clark’s movie opens in Vietnam, where young soldier Andy (Richard Backus) is killed. Back home in the States, his family is paid visit by a military officer who delivers the sad news. Andy’s mother is beside herself with grief. She wishes it’s a mistake and that Andy will return.

However … That very same night something unexpected happens. Andy returns home! After getting of a plane, he hitch-hiked to his hometown. But there’s something strange about Andy. He may look the same, but he doesn’t behave like he just to. He hardly talks. He’s creepy. He doesn’t seem to sleep. He likes spending most of his time in a rocking chair. And to make 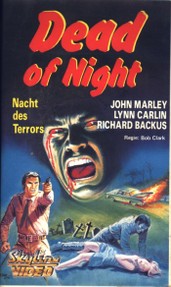 matters worse, the truck driver he hitched a ride with is found dead. Soon more people end up dead in the small town.

Yup. You guessed it. Andy died in Vietnam, that’s for sure. And now he’s some kind om vampiric zombie who needs blood to stay alive and stay young. He decomposes if he doesn’t inject himself with fresh blood.

“Deathdream” is probably one of the most depressing horror movies ever made. But in this case, that’s a good thing. The film is also very, very slowly paced. This is combination with the depressing tone makes Bob Clark’s movie a really nightmarish experience. It’s soaked in atmosphere, it oozes dread. It’s strange and creepy. Gorehounds and young teenagers will probably find “Deathdream” too slow and boring, but you really should give the movie a chance. This is great stuff! They sure don’t make horror movies like this one
any more: thoughtful, weird and aimed at mature audiences.

Hvilans Video closed down in the early ‘90s. 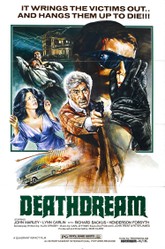