Joseph Ellison's 1980 slasher is one of the most notorious so-called video nasties.

"Don't Go in the House" is said to be a truly nasty horror movie. A deranged serial killer burns people to a crisp in a steel-clad room in his basement. It was banned in several countries and ended up on the dreaded list of video nasties in the UK. But is Joseph Ellison's movie any good? Here's a review of it. 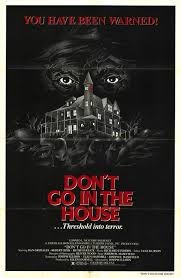 I’ve been curious about this movie for a very long time. It used to pop up quite often in the British horror mags I read twenty years ago, since this is one of those infamous so-called video nasties. Joseph Ellison’s “Don’t Go in the House” from 1980 (but the copyright note in the opening titles actually say 1979) was often described as one of the nastiest of the nasties, and its British video release also sported a very ugly, nasty sleeve; just a shoddy still from the movie.

Dark. Depressing. Sadistic. Perverse. Nasty. And absolutely no humor. That’s how the movie was described. And when I read the plot, well, it sure sounded sick, twisted and repulsive.

The movie was supposed to be called “The Burning”, but since another movie with that title was released the same year, they had to re-titled it -- but don’t ask me why the hell they chose the utterly lame title “Don’t Go in the House”. Yes, there was a whole bunch of movies with titles beginning with “Don’t” in the 1970s, but come on -- Don’t Call Your Movie That!

Dan Grimaldi, who later was in lots of TV shows, like “The Sopranos”, plays a young man called Donny Kohler. He’s living in a big house along with his old, sick mother -- a woman who was very dominating and when Donny was a kid, she once punished him by burning his arms over the flames of the gas cooker. This made the quiet loner Donny a demented young man.

One night when Donny comes home from work, he finds the old bat dead. And what does he do? Does he call for help? Does he call an ambulance? An undertaker? No, of course he doesn’t. He keeps his dead old bitch of a mother in the house. She sitting there, decomposing in her armchair. And Donny gets a wonderful idea: he covers the walls of a room with steel plates -- he builds his very own incineration chamber. Time for some fun and games. 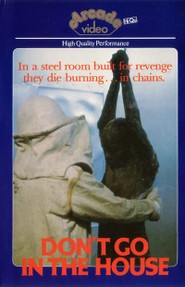 Donny stays home from work, he says he needs to take care of his very sick mother, and his only friend, a guy from work, believes him, but warns him -- if he doesn’t show up at work within soon, he’ll be fired. Donny doesn’t care about this. Instead he picks up young, pretty women which he lures back to his big old gloomy house. There he strips them naked, hangs them on a hook in the incineration chamber, and torches them alive with a flame thrower! Why? Because Donny was burned as a kid which made him insane, that’s why. And because he hated his mother.

The guy from work persuades Donny to join him at a disco for a double date, and after buying a nifty disco outfit, Donny goes there. But of course he can’t behave. While dancing with one of the girls, he gets painful flashbacks from his childhood, and all of a sudden he manages to set the poor girl’s hair on fire.

The workmate and a priest go after Donny, they must stop the crazy son of a bitch, but Donny is already in trouble -- his charred victims come alive and chase him, and then it all ends in tears.

The idea behind this movie is more sick and perverse than the execution. There are just a handful of murders in the movie, and they aren’t very detailed -- at least not as detailed as they could’ve been. But the whole thing about the steel clad room where women are burned alive is exceptionally nasty. 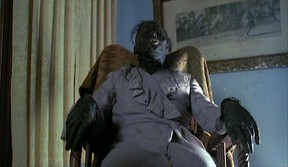 “Don’t Go in the House” has a very dark, intimidating atmosphere, enhanced by a chilling synthesizer score. It’s pretty low-key, it differs a lot from most of the other slashers that were popular back then. There are of course shades of “Psycho” in here, but it also makes me think about William Lustig’s “Maniac”, that also came out in 1980. Especially the nightmarish ending with the corpses coming alive feels like Lustig’s movie. And speaking of nightmarish, it’s also hard to avoid thinking of Romano Scavolini’s 1981 nasty “Nightmare” (released in the UK as “Nightmare in a damaged brain”) -- the two movies have the same tone. Some kind of bizarre, hardcore horror, not really aimed at the teen crowd.

I kind of liked “Don’t Go in the House”. It’s far from a masterpiece, far from a classic. I can’t even say it’s a very good horror movie. But it has that … something that appeals to me. And I like the style and look of 30-year-old horror flicks.

However, there is one very odd thing about the movie. When I watched it, I thought some of the actors sounded a little strange. The priests sounds like he’s in a kung fu-movie. And then I found out why. The equipment they used when they shot “Don’t Go in the House” was absolute crap -- and they couldn’t use the original soundtrack. Therefore, the actors had to loop all of there lines, so yes -- the movie is dubbed.

Joseph Ellison only directed two movies, this one and the 1986 drama “Joey”. And don’t expect a big-budget remake of this piece of pure horror. 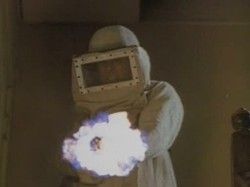