A review of the classic French horror thriller, also known as “The Horror Chamber of Dr. Faustus”.

I watch loads and loads of movies, about a thousand movies a year, including the ones I re-watch. However, there are still lots of classics I’ve never seen. I still prefer a martial arts movie to a three hour German silent movie from the 1920s. I watch Jess Franco movies instead of “Terms of Endearment” (if that one’s considered a classic). I still haven’t seen “Ghandi”, and to be honest, I don’t feel like it.

But there are movies I kind of feel ashamed not having seen, especially classic horror movies, since I’m regarded as something of a horror movie expert. One of these movies is the French movie “Les Yeux Sans Visage”, directed by Georges Franju and released in 1960. The English export title is “Eyes Without a Face”, which I and most others use, but a dubbed and edited American drive-in version was retitled “The Horror Chamber of Dr. Faustus”. Cool title, but it makes it sound like a grindhouse flick, and there’s no Dr. Faustus in the movie.

Now I’ve seen “Eyes Without a Face”, and it didn’t come as a surprise that it’s far from a grindhouse movie. It was Franju’s second feature film, and he actually didn’t direct that many movies during his career; he died in 1987. This is an absolutely wonderful movie -- a mood piece if there ever was one.

Shot in glorious, atmospheric black and white, Pierre Brasseur plays Dr. Génessier, an insane surgeon who’s young daughter Christiane’s (Edith Scob) face is horribly scarred after a car accident. Poor Christiane hides her face behind a white mask, while the mad old doctor sends his assistant, Louise, to kidnap young, pretty women, whose faces Génessier slices off to graft onto Christiane’s. Louise is played by Italian actress Alida Valli, who was in a long string of movies, but who to horror fans is known as one of the witches in Dario Argento’s “Suspiria” (1977).

After having their faces carved off, the victims are killed, or commit suicide, but then suddenly the doctor manages to restore his daughter’s beauty. It doesn’t last, though. After a couple of days, her face starts falling apart. Her father must get back to work -- but now the cops are investigating the case of a missing woman. One of the cops is played by Claude Brasseur; Pierre’s real life son. They send a young woman to Génessier’s clinic, posing as a patient.

And what does Christiane think of all this? Well, she sure isn’t happy. She’s a very sad woman in a sad story, which can only end in one way -- with poetic justice.

Poetic is one word to describe “Eyes Without a Face”. Its images are both nightmarish and beautiful. Christiane in her mask is a striking image. This is also a darkly comical movie, something Maurice Jarre’s score focuses on. Some of the themes are inspired by typical circus music, which is both unsettling and funny.

I mentioned Jess Franco in the first paragraph of this review, and dear Spanish maverick Franco is a director who got very inspired by Franju’s masterpiece. Franco has returned to the theme several times, and his most obvious homage is the amazing “Faceless”.

Oh, and the young actresses in this movie are absolutely gorgeous, and the surgery scenes are very graphic for its time and still very nasty and hard to watch.

Do yourself a favor and check this movie out. This is one of the best horror movies you can find out there. 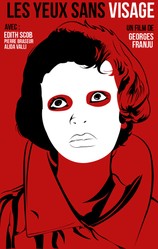