A look at one of infamous Italian hack director Bruno Mattei's last movies. Twenty years after the European cannibal movie cycle, Mattei made a new one.

The Italian cannibal cycle is one of the most controversial movie genres there ever was. About a dozen cannibal movies were produced in the 1970s and '80s, and they gained notoriety because of their depravity, racism and extreme violence. Several of the movies contained scenes of animals getting killed for real.
A couple of decades later, Bruno Mattei decided to make new cannibal movies. Here's a review of one of them. 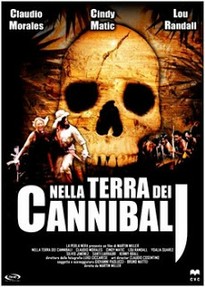 There is a handful of movie genres that are pretty hard to defend. The Italian nazi exploitation movies of the 1970s, for example. Or certain rape and revenge flicks that seem to focus on rape and degradation rather than revenge. And then there are the cannibal movies; a European -- mainly Italian -- cycle that lasted from Umberto Lenzi’s “Deep River Savages” (1972) to Mario Gariazzo’s “Amazonia: The Catherine Mills Story” (1985). The most well-known and infamous cannibal movies are Ruggero Deodato’s “Ultimo Mondo Cannibale” (aka “The Last Survivor,” 1977), “Cannibal Holocaust” (1980), and Umberto Lenzi’s “Eaten Alive!” (1980) and “Cannibal Ferox” (aka “Make Them Die Slowly,” 1981).

The reason these movies may be a little hard to defend is of course the fact that they are depraved racist fantasies -- and that they often contain scenes in which animals are killed for real just for the sake of, well, not art, but exploitation. However, these movies are also rather old-fashioned adventure tales spiced up with sex and violence. This makes most of these movies rather entertaining and some of them actually quite silly. This goes especially for a couple of quickies, like Jess Franco’s “White Cannibal Queen” (aka “Cannibals,” 1980) and the hilarious French movie “Cannibal Terror,” directed by Alain Deruelle in 1980. On the other hand, Deodato’s “Cannibal Holocaust” may be one of the most controversial films ever made, but it’s also a very skillfully made movie, it’s powerful and a masterpiece of its genre. 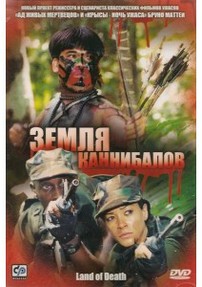 Infamous Italian hack director Bruno Mattei (1931 - 2007), often using the pseudonym “Vincent Dawn,” is beloved for his wonderfully crappy horror and action movies such as “Hell of the Living Dead” (aka “Zombie Creeping Flesh,” 1980) and “Rats -- Night of Terror” (1984), but he never tackled the cannibal sub-genre during the heydays of the Italian B-movie industry. It wasn’t until a few years before his death, when Mattei for some reason got busier than ever, he made his only contributions to the genre. Mattei made two cannibal flicks in 2003 -- “Mondo Cannibale” as Vincent Dawn, and “Land of Death” as Martin Miller. No matter what name he put on them, these movies are pure Mattei -- and pure cheese.

“Land of Death” (the original title is “Nella terra dei cannibali” and it has been released as both “Cannibal Ferox 3” and “Cannibal Holocaust 3”!) gives the impression of being written by a kid -- a teenager who loves action, war and blood, but really can’t write. The screenplay is however written by Mattei himself along with Giovanni Paolucci, who went on to produce Dario Argento’s “Dracula 3D” (2012). What they’ve done is simply combining “Predator” (a movie Mattei ripped off as “RoboWar” in 1988) with “Cannibal Holocaust.” The story is so slim you barely notice that there is a story somewhere in the Amazonian jungle -- shot in the Philippines.

An expedition has disappeared in the jungle and the blonde daughter (Cindy Matic) of a general has been kidnapped by a cannibal tribe -- these natives seem to believe eating human flesh will protect them from evil. Or something like that. A team of mercenaries is sent to the jungle to find the lost expedition. This team is lead by a certain Lt. Wilson, who’s played by Lou Randall -- a truly awful actor with the charisma of a boiled meatball. He does his best to look as tough as possible. There’s also a female merc in the team, she’s clearly modelled on Vasquez from “Aliens” -- and to make sure nobody misses that, she’s also named Vasquez. Extremely silly, of course. Another character is named Cameron -- probably after "Aliens" director James Cameron.

These mercs hook up with jungle expert Romero, played by Claudio Morales, who acted in four of Mattei’s movies before appearing in two Danish TV series. Pretty odd. Anyhow, what follows is basically 90 minutes of tough-guys wandering through the jungle and confronting aggresive cannibals every now and then. 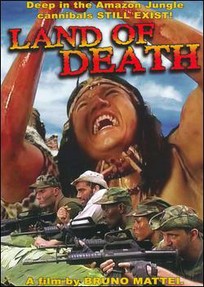 Several of the scenes with the cannibals are lifted straight from Deodato’s classic. No, not the actual movie, but Mattei has kind of remade certain scenes. Lt. Wilson is forced to chow down on a bloody piece of intestines, the cannibals are fascinated by a switchblade, Romero takes a dip in a river and is surrounded by naked, native women -- and so on. All these steals; all these familiar scenes, make “Land of Death” a rather strange viewing experience. And since this movie also is inspired by “Predator,” there’s lots of gunfire here. There’s so much shooting going on here this is more of an action movie than a cannibal horror flick.

… But most of the time nothing special happens. They walk around in the jungle. They look tough. There’s lots and lots of padding here. Even the action scenes may be considered padding, since the story is close to being invisible.

The main problem with “Land of Death” is that it was made in 2003 -- about 20 years too late. Like the rest of Bruno Mattei’s movies from the new millennium, this one was shot digitally and has a cheap video look, at least when they’re indoors. It looks better when they’re running around in the jungle, which they fortunately do most of the time. The music also sounds cheap. It’s a simple synthesizer score trying to mimic big Hollywood war movie scores. Back in the ‘70s and ‘80s, movies like these had much more memorable music scores. The English dub is wonderfully tacky -- the voice actors struggle with quite awful lines. Especially Vasquez provides some laughable lines.

The movie does have some production values, though. There’s some hardware on display, there’s a helicopter, there’s a cannibal village, and it was shot on location in a real jungle. There’s also quite a few extras jazzing about here.

To keep up with the shock value of the old cannibal movies, there’s a pig being killed for real in front of the camera, but otherwise the gore is surprisingly tame. There’s some blood, a couple of limbs getting chopped off, but most of the violence occurs off-screen.

So, should you watch “Land of Death”? No, you shouldn’t. Sure, I’m a jaded, middle-aged man, but this movie is a yawn-fest. Despite the unintentionally funny scenes, I found this movie pretty damn boring. This is a piece of crap. This one is for cannibal completists only. You know who you are. And yes -- I’m one of them. 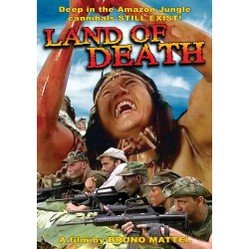