Slashers very extremely popular in the early 1980s. Here's a review of one of the most well-known entries.

John Carpenter's "Halloween" created the slasher; a horror sub-genre that flooded movie theatres and video stores in the early 1980s. Emmett Alston's "New Year's Evil" tried to combine horror with rock 'n' roll and the new wave scene. The result doesn't work very well -- but it's still a quite fun little movie for us nostalgics. 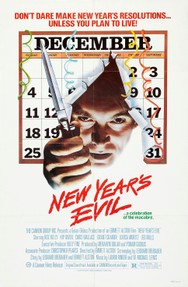 Sometime in the late 1980s I got a really, really great idea for a horror movie or a horror comic: a serial killer who, travelling in his own jet plane or maybe a very, very fast car, goes from time zone to time zone on New Year’s Eve and kills people when the clock strikes midnight.

But then I bought Phil Hardy’s magnificent “The Encyclopedia of Horror Films”, this was probably in 1989, and a whole new world opened up. I read this book from cover to cover and noted that i hadn’t heard about the vast majority of the movies listed in the book -- this book features thousands of obscurities from all over the world. And I had no idea there already was a movie about a nutcase killing people on the strike of twelve in the different time zones of America: the 1980 Golan-Globus production “New Year’s Evil”. A movie I haven’t managed to check out until now -- OK, I can’t say I’ve been desperately looking for this forgotten piece of celluloid.

Roz Kelly plays Diane Sullivan, hostess of an incredibly popular new wave rock TV show. On New Year’s Eve a bunch of bands play live in the show and the viewers can call in and vote for the best band. This is of course that typical Hollywood version of new wave, with people wearing lots of mascara and have pink (or some other color) triangles painted on their cheeks. I’ve no idea if this look actually existed, I can’t recall seeing people, TV hosts or even bands looking like this in the ‘80s. They’re kinda like the punkers in “Death Wish 3”. They sport the clown look. And the music they play and listen to is naturally anything but new wave.

Diane has problems with her emotionally sensitive son, who thinks she’s neglecting him -- which she also does this evening when he wants to tell her he’s got a part in a new TV drama series. She doesn’t listen! The son longs for his dad whom he almost never gets to meet. 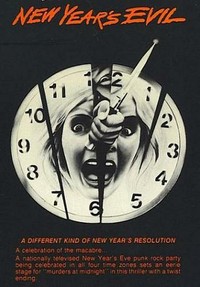 Suddenly a maniac using some kind of voice scrambler calles the show. He claims he’s Eeeevil, and we actually get to see what he looks like, since he isn’t masked: he’s played by Kip Niven, who kind of looks like a skinny version of Kevin Sorbo. And what does this fellow want? you ask. Or maybe you don’t, but I’ll answer the question anyway: you see, Evil has a tape recorder and he’s recorded the sound of him killing a nurse when the clock struck twelve -- she had to be punished because she was naughty. And now Evil is about to punish a naughty girl at the strike of midnight all over the U.S.A. -- which he does. But I didn’t really understand if the guy actually travels from zone to zone, or if he just waits an hour and then tunes in a radio channel in a new state and kills somebody with the sound from the radio playing in the background. It actually seems like he’s cheating. How come I don’t know if he’s cheating or not? Because I didn’t pay attention. Most of the time he’s using a switch blade when killing the naughty girls, and one time he disguises himself -- he puts on a fake mustache!

OK, the cops are trying to find Mr. Evil and they’ve come to the conclusion that he’s saving Diane for last. They seal off the hotel where Diane is situated, but Evil -- who’s killed a few more people as a bonus, like cops -- has already managed to get inside the building, and what do you know if he doesn’t steps into Diane’s suite -- and he’s wearing what looks like a Stan Laurel mask. How the heck did he manage doing this? Well, it turns out that …

… Evil is Richard Sullivan -- Diane’s husband! The man Diane’s son is longing for. But I figured that out already at the beginning. We learn that Richard’s been locked up in a funny farm. He does his best to kill Diane, but he’s not very good at slaying his old wife, and then he trips and falls from the roof of the hotel and dies. The end,

“New Year’s Evil” isn’t very good. It’s actually pretty bad. The idea is interesting -- of course it is, I came up with it myself -- but the execution is boring. For being a slasher, the movie is remarkably bloodless, especially for an early 1980s slasher. It’s slightly reminiscent of an Italian giallo, especially since the killer is using a switch blade, but it breaks the rules of the giallo, since we get to see the killer already at the beginning -- even if we’re not supposed to understand who he is. This is more or less a regular murder mystery, a thriller trying to disguise itself as a horror movie. 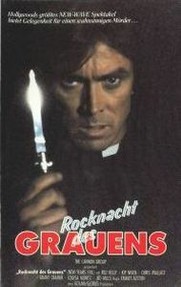 But even though this movie really is way too boring, you still have to check it out -- because of it’s rather insane plot, and because it’s documentation of the early ‘80s (or the alternative early ‘80s in a parallell world). There are lots of bands and music in the movie, and basically everything sucks.

Roz Kelly doesn’t at all look like a “Queen of Rock”, which she’s introduced as. She’s more convincing as an overaged hag wearing too much make up, and who doesn’t know shit about rock ‘n’ roll. 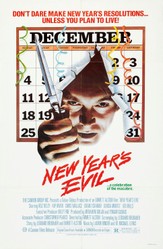