Back in the 1970s and '80s, there was something called Movie of the Week, a term which referred to made for TV movies. Most of these movies were rather bad, they either felt like long episodes of regular 50 minute TV shows, or like watered down cheapo versions of big theatrical hits. Then there were the movies that stood out. Like Steven Spielberg's "Duel". Or this one -- John Carpenter's "Someone's Watching Me!". 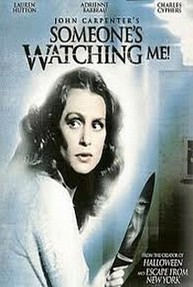 The 1978 TV movie “Someone’s Watching Me!” aired on Swedish television in 1982 and I remember watching it along with my family, and we thought it was extremely thrilling. At least my younger sister and I did. We talked about it for weeks or months afterwards; “What if our neighbor, Mr. Linder, is watching us right now?” (maybe he did, he was at watchmaker and when he wasn’t in his little shop, he was sitting by the window, repairing watches -- and maybe also watching? Come to think about, he did watch -- he once called the cops when he noticed there was a burglar in our house while we were on vacation; the gut got arrested in our garden).

Back in ‘82 I had no idea this movie was written and directed by John Carpenter -- I had no idea who Carpenter was back then and I’m not sure I had seen “Halloween”; I think the first Carpenter movie I saw was “The Thing” -- which surprisingly popped up in a Holiday Inn hotel in Germany (and not dubbed into German) when it was fairly new.

I would say that the best movie director there ever was, was Alfred Hitchcock. I don’t like all of his movies, but the man was a master. And since so many people ask me what my favorite movie is -- an impossible question -- I’ve decided that the masterpiece “North By Northwest” is the best movie ever made. However, I do have problems with imitations of and homages to Hitchcock; the early Brian De Palma thrillers sometimes tend to get a tad silly when he’s lifted full scenes from very well-known Hitchcock classics. 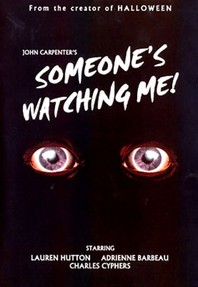 “Someone’s Watching Me” aired on some cable channel about twenty years ago, and now I just re-watched it again. Since I didn’t remember much of it, the opening made my jaw drop: the title sequence is an animation is which a grid is drawn -- and fades into a high-rise. Just like the titles of “North By Nortwest”! And the music by Harry Sukman mimics Bernard Herrmann’s score for said Hitchcock movie!

And then it goes on like that. Lauren Hutton is Leigh Michaels, the typical, blonde Hitchcock heroine of your choice. Leigh is a TV producer who moves to Los Angeles and into a nice, big apartment in a high-rise. It doesn’t take long before she starts receiving creepy phone calls from a man with a scary voice. The mystery man also sends her weird presents.

One of the presents is a telescope, and it doesn’t take long before Leigh notices that someone in the opposite building is watching her. also with a telescope -- “Rear Window” style. Hmm, Leigh and the creep are watching each other, what’s this, “Rear Window” vs “Rear Window”? 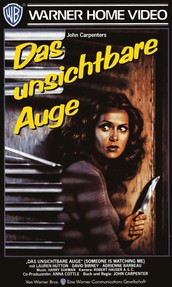 What does the man want? Leigh goes to the police, but since she hasn’t been theatened, they really can’t do anything, but along with her lesbian workmate Sophie (Carpenter regular Adrienne Barbeau) and a handsome hunk who rapidly became Leigh’s boyfriend, Leigh tries to snare the peeping Tom herself. This leads to lots of sneaking around in dark apartments, armed with big, shiny carving knives.

What can I say. I’m thirty years older. I’m very jaded. This time, I didn’t find “Someone’s Watching Me!” thrilling at all. I must say I thought this Hitchcock pastiche was pretty fascinating, it’s more or less just a long series of steals from other movies. This fact is also a little annoying.

The story itself doesn’t really work and the ending is a big let-down. Was this all? Yeah, I can understand I once found the climactic fight with the bad guy quite hair-raising, and maybe you will as well. There are way too many scenes where Leigh is alone at home and talking to herself, just to make the viewers understand what’s going on. 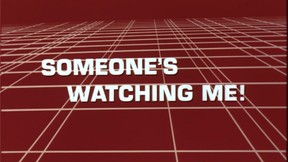 It’s pretty interesting that our damsel in distress smokes cigarettes in almost every scene she’s in -- and that means almost every scene in the movie. She spends the movie chain-smoking, and she’s allowed to smoke just about everywhere. Ah, those were the days. She also drives her car back home after a couple of drinks in a bar.

“Someone’s Watching Me!” is a little disappointing, but I guess it’s pretty good for being a TV movie. You should try to watch it if you’ve never seen it, and I found the cheerful Barbeau very likable.

In 1983, there was a TV movie called “Through Naked Eyes” starring David Soul and Pam Dawber. It’s a thriller about a guy living in a high-rise who checks out his neighbors in the opposite building, and one day spots an woman looking back at him ...