"The Exorcist" is of course one of the most influential horror movies of all time. It didn't take long before copycats in the movie biz started churning out their own, cheaper variations of the devilish theme. The Italian film industry was the KIng of the Cash-ins, and among their Demonic Possession movies, this one is the best. 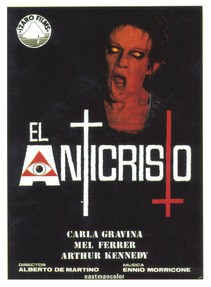 Whenever there’s a new, presumed blockbuster around the corner, the American B-movie company The Asylum strikes and produces a so-called mockbuster; a cheap cash-in with a title similar to the big-budget movie. “Transformers” became “Transmorfers”. “I am Legend” became “I am Omega”.

Back in the 1960s, ‘70s and ‘80s, the Italians were the mockbuster kings; The Asylum of their day. However, there was one big difference: several of the Italian cash-ins became great, classic movies of their own. OK, maybe not the silly Sword & Sorcery movies or the post holocaust flicks, but personally, I find many of the Italian horror movies much better and more interesting than their American counterparts. I prefer most of the Italian zombie movies to George A. Romero’s, but I generally prefer Italian horror and exploitation. It was the Italians that made me interested in movies “for real”; that made me, as a young teenager, go from a guy who just likes movies to one who’s really interested in movies. 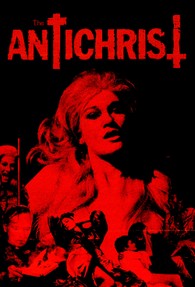 These days, I’m pretty jaded and not that easy to please. I watch new, critically acclaimed horror movies and think “Was this all?”. How the hell could the lame “Don’t be afraid of the dark” get so good reviews when it opened in the States?

But sometimes I stumble upon a movie; usually productions from the ‘70s, that surprise me, that make me go “Hey, this is pretty damn good!”. Like “The House with Laughing Windows”, a 1976 Italian horror thriller I watched and reviewed earlier this year after wanting to see it for decades. But in that case, I knew it was supposed to be a really great movie.

I didn’t know much about “The Antichrist” (“L’anticristo”) from 1974, also released as “The Tempter”, not more than it -- just like “Beyond the Door” -- was a cash-in on William Friedkin’s “The Exorcist” (1973). I watched it, expected it to be a sleazy piece of schlock -- but I was surprised. I wouldn’t say that “The Antichrist” is better than, or at least as good as “The Exorcist”, and most of the movie isn’t very reminiscent of Friedkin’s classic, but this is a good movie on its own merits. Albeit with a few reservations … 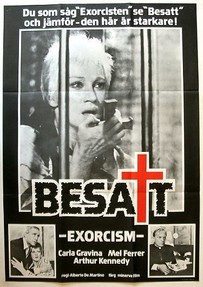 The statuesque and very beautiful Carla Cravina plays Ippolita, who as a child was in a car accident that killed her mother. Ippolita got mentally scarred in the crash; she’s paralyzed, wheelchair bound, and things don’t get better when a psychologist makes her remember an earlier incarnation of herself as a witch who was burned at the stake during the inquisition.

Being this an occult movie, Ippolita gets possessed by the devil, and in a surreal dream -- or is it reality? -- she’s raped by Old Nick himself. After this, the poor girl starts behaving quite odd. Not only can she walk, she also starts seducing men -- and killing them. And then she goes all-in and speaks with a scary voice, spits pea-soup and levitates.

Ippolita’s worried dad, played by Mel Ferrer, sees no other solution than calling the local exorcist.

My reservations: the possession and exorcism bits. They feel kind of tacked on -- and they’re pretty silly. Not that the effects are that bad, but it gets silly when they’re trying to imitate “The Exorcist” in a very obvious -- and inferior -- way. 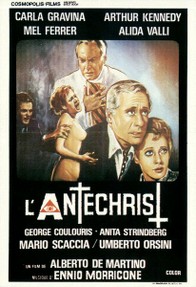 Otherwise, “The Antichrist” took me by surprise. This is a good movie! It was directed by veteran Alberto De Martino, one of those guns for hire that made movies in whatever genre that was popular at the moment. He’s a pretty anonymous director and not a fan fave like Argento, Fulci and that gang, but he’s still a competent filmmaker. 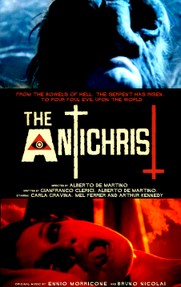 To make all this even better better, Ennio Morricone and Bruno Nicolai supplied the score, and this movie features something sorely lacking in “The Exorcist” -- namely eroticism. I wouldn’t say that it’s exploitative, it all pretty tastefully done, and the tall, long-necked Miss Cravina gets several opportunities to show off her incredibly long legs (plus glimpses of the rest of her).

Mel Ferrer had an interesting career in Italian B-movies during the ‘70s and ‘80s, which he topped with the cannibal movie “Eaten Alive!” and the (kind of) zombie flick “Nightmare City (aka “City of the Walking Dead”) -- who would’ve expected that during his Hollywood days in the ‘50s and ‘60s?

We also get to see Arthur Kennedy as a catholic priest -- which he also played in Michael Winner’s 1977 horror movie “The Sentinel”, and Ferrer’s young mistress is played by the stunning Swedish actress Anita Strindberg, a familiar face in Italian gialli. Legendary actress Alida Valli, who got her first film role in 1935 and who’s well-known to horror fans after acting in Dario Argento’s “Suspiria” and “Inferno” also appears.

I wouldn’t say the “The Antichrist” is a classic in any way, but it’s a good, solid, fascinating and nice looking little movie. A couple of years ago, Lars Von Trier made a speculative art house movie called “Antichrist” -- but if you’re only going to see one movie with the word Antichrist in its title, De Martino’s is the one! 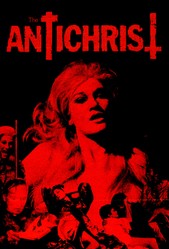