Charles B. Pierce was a prolific B-movie director and the man behind several well-known and beloved hits. The horror thriller "The Evictors" isn't one of his most famous movies; it's somewhat forgotten, but if nothing else, it's fondly remembered because of its captivating poster. Here's a closer look at the film. 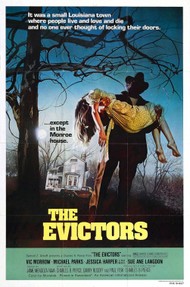 Charles B. Pierce, who passed away in 2010, is probably most known for his directorial debut  “The Legend of Boggy Creek” from 1972, but of the twelve movies he made, only a few could be considered being horror or thrillers. Pierce made several Westerns, like “Grayeagle”, the Viking flick “The Norseman”, and a handful of movies taking place in the 1930s and ‘40s, often depicted in a rather nostalgic way, like “The Bootleggers” and the serial killer drama “The Town that Dreaded Sundown”.

Pierce’s movies had a certain, maybe a little odd, style. They were all low-budget productions, but the director always tried to make them look bigger and more epic. He hired well-known actors, the cinematography was pretty good, the movies are competently made, but for some reason, they often lacked in thrills -- they didn’t deliver. This resulted in the movies looking like TV movies.

I remember reading a review of “The Evictors” in the legendary magazine Scandinavian Film & Video, when it was released on video in the mid-1980s or so. The woman who reviewed it claimed that she stopped watching it half-way through and waited to finish it until she got company -- “it’s that scary,” she wrote. That sounded promising, but I couldn’t find the movie in any videostores where I lived. 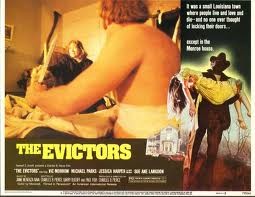 Then in the very early ‘90s, I got hold of a copy of the movie, and old ex-rental tape I found in one of those great outlets that sold thousands of old movies really cheap. Finally. Let’s see if “The Evictors” is as scary as that review claimed, let’s see if it lives up to its cool poster art.

It didn’t. “The Evictors” wasn’t scary at all. After watching it, I put in on the shelf where it was collecting dust.

After not having seen it for about twenty years, I just re-watched “The Evictors”. Maybe I was wrong back then. I’m an older man now, maybe I’ll look at the movie in a different way now. discover things I didn’t notice back then. 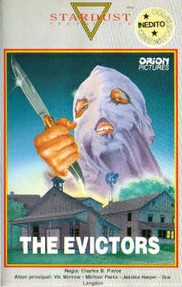 Inspired by true events, “The Evictors” centers around the Watkins: Jessica Harper of “Suspiria” fame is Ruth, while Michael Parks is hubby Ben. Aha, that’s something I didn’t think about twenty years ago, I didn’t know who Michael Parks was back then; he was just a familiar face. These days he’s known for working with Tarantino and others.

Anyhow -- the movie opens with a prologue taking place in the 1930s. Cops attack a couple of bad guys living in a house in in Louisiana countryside. After a violent shoot-out, we skip to 1942 and the newlywed Watkins movie into the nice, pretty old house, without knowing what’s happened there. Real estate agent Jake Rudd does of course not tell them about its dark, violent history. Rudd is by the way played by Vic Morrow, who gets top billing, but only appears in a few scenes at the beginning and the end of the movie.

Things doesn’t start out very well for the Watkins. Somebody puts a note in their mail box: “I want you to move”, it says. Then the villagers treat Ruth in a little weird way, they’re friendly, but refuse to come over for coffee. Neighbor Olie (Sue Ane Langdon) is very friendly, though, she’s weelchair bound and lives all by herself. 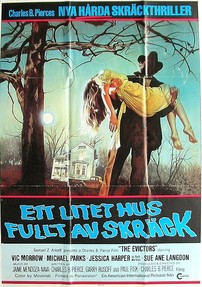 A peddler pops by and tells the story of the house to Ruth, it turns out that there have been more deaths there besides the gun battle we saw in the prologue. Another married couple who lived there a few years after the shoot-out got murdered.

Ben spends all days at work and sometimes has to work late, and Ruth senses she’s not alone in the house; she hears noises. Then she actually sees a man sneaking around the place, a scary looking man wearing a hat. The peddler gets himself an axe in the neck the next time she shows up, and then Ruth is attacked and chased around the house.

… Well, that’s about it. It all leads up to a conclusion that isn’t very surprising. However, what is surprising, is the fact that there’s nothing supernatural going on here. Charles B. Pierce tries to build up a spooky atmosphere, but “The Evictors” is just a thriller disguised as a horror movie. The boogey man is just some guy. Wearing a hat. 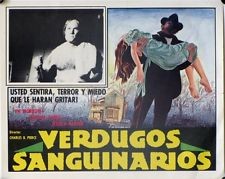 This movie isn’t the slightest bit scary, thrilling or exciting. It’s very tame and yes, it does feel like it was made for television. But it’s still a nice little movie, it’s quite cosy and it benefits a lot from its cast. Husky-voiced Jessica Harper with her big, sad eyes is likable, and so is Michael Parks. The late Vic Morrow sports a mustache. Some of the music is pretty effective.

As far as I know, “The Evictors” isn’t available on DVD. The old VHS of it is of course a pan-and-scan full-screen version, which probably doesn’t do the CinemaScope cinematography any justice. 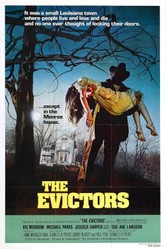