The Italian giallo is a genre known for its often glossy and sophisticated style and cinematography. Then there are a few productions that are quite the opposite. Like this trashy little piece of nasty entertainment that's not very good, but pretty fun. The title promises some sex and violence and that is what this movie delivers. 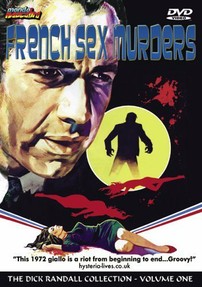 The original title of this 1972 Italian movie is “Casa d’appuntamento,” but “The French Sex Murders” is of course a much better title. And no, this movie may take place in Paris, but it’s an Italian-West German production, directed by Ferdinando Merighi.

… But if I didn’t know better, my guess would be this is a Jess Franco movie. It sure looks like a Franco movie from his late 1970s, early ‘80s period: pale, gray cinematography, lots of zooms, seedy Paris locations -- and Jess Franco stalwart Howard Vernon plays one of the main characters. There’s also a score by Bruno Nicolai, who scored several Franco flicks, and this score resembles the one for “A Virgin Among the Living Dead.”

“The French Sex Murders” opens with its final scenes -- which, as always, is totally unnecessary. An unseen man is chased by cops, he stops his Citroën by the Eiffel Tower, he runs up the tower, and then plunges to his death. Inspector Pontaine lights a cigarette and the story starts from the beginning. Pontaine is played by American actor Robert Sacchi, a guy who’s known for being the spitting image of Humphrey Bogart and who made a career out of impersonating this legend. Therefore, Paris inspector Pontaine looks, dresses, sounds and behaves just like Bogart. It goes without saying that this makes the movie pretty damn odd.

Swedish actress Anita Ekberg (who was raised in the part of Malmö where I used to live) plays Madame Colette, who runs a brothel. German actress Barbara Bouchet is one of the working girls, who has a fight with a customer. The guy beats the shit out of Bouchet and leaves -- but when the girl is found dead in her bed, the guy is arrested for murder. He’s sentenced to dead (to be decapitated in the guilloutin!), but manages to escape. After a wild motorcycle chase, he speeds into a parked truck -- and is decapitated anyhow. 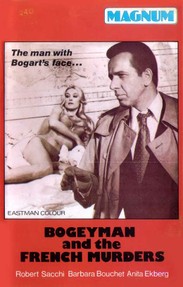 The suspected killer is dead -- but the murders continue. And yes, the title of this movie doesn’t lie. Most of the murders occur just after characters have had sex. Anita Ekberg is killed about half-way through the movie -- fortunately, we don’t get to see her have sex. Her looks had already faded quite a lot in 1972 and she was about to turn into the grotesque Jabba the Hut she’s looked like the last 30 years.

We’re also introduced to the bizarre professor Waldemar (Vernon), his daughter, and a lab assistant, and there’s an eye-ball thief at large. Yes, there’s quite a lot going on here, and it doesn’t really make sense. But who cares? This giallo is pretty sleazy, but it’s also entertaining. It has a great cast; Rosalba Neri and Evelyne Kraft are also in it, several of the murders are instantly repeated over and over again -- in different colors, there are two decapitations (pretty crappy effects), and in the end credits, special effects guy Carlo Rambaldi has his name misspelled; he’s credited as “Prof. Carlo Ranbaldi.” 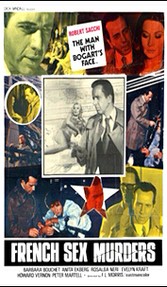 All this plus a Humphrey Bogart impersonator -- who can resist that?

The version I saw was culled from different sources to make it as complete as possible, which means that a couple of scenes had dialogue in French, while the rest was dubbed in English.

“The French Sex Murders” was produced by American Dick Randall and it was released as “The Bogeyman and the French Murders” in the UK. 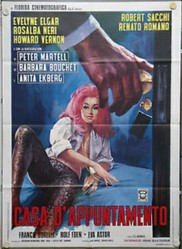