The late Spanish director Amando de Ossorio is mainly known as the man behind the Blind Dead series, but he made a lot more than those movies.
"The Loreley's Grasp" is a wonderfully trashy movie, packed with everything you love with European horror. Sex, violence, cheese. Here's a review of this lovely film. 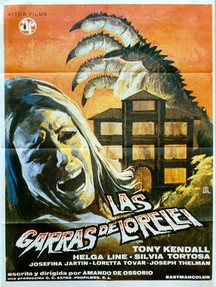 Spanish director Amando de Ossorio (1918 -- 2001) is mainly known for his Blind Dead series; the horror movies about the blind knight templars who return from their graves to ride their skeleton horses (in slow-motion) and terrorize the Spanish countryside. This series, which began in 1972 with “Tombs of the Blind Dead,” is rather uneven, but those zombie templars are pretty damn cool.

Ossorio made several more movie than these. Who can forget the absolutely insane 1973 epos “The Night of the Sorcerers” about bikini-clad vampire babes skipping around (in slow-motion) in a jungle? And then we have “Las garras de Lorelei” from 1974, released in America as “The Loreley’s Grasp.”

“The Loreley’s Grasp” is awesome!

I mean it! I watched it for the very first time just a couple of days ago. It’s absolutely amazing! This is one of the most entertaining horror movies I’ve ever seen -- and I loved it.

This is also a piece of utter crap. But one of the most endearing, amiable piles of garbage there ever was.

The story takes place in Germany, in a small town near the Rhine. This is your typical German horror movie town, where people likes to wear traditional clothing, sport big mustaches and hang out in the tavern where they smoke pipes and drink beer from enormous mugs. 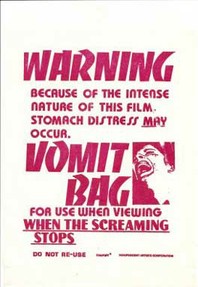 There’s also a boarding school for girls in this town. The students at this school do what most girl students preferred to do back in the 1970s: wearing colorful bikinis, playing volley-ball and hanging out by the swimming pool next to the school. One of the teachers, Elke, is played by the über-hot Silvia Tortosa; one of the most beautiful women I’ve ever seen. Elke doesn’t seem to approve of the students behavior. Interestingly, Elke doesn’t look like she’s much older than her students.

Unfortunately, there’s a monster roaming the area. Girls show up dead. Mutilated. Rumor has it that it’s the legendary Loreley who’s killing the girls -- plus a blind violinist, who gets himself snuffed after telling the legend.

The legend is of course true. Helga Line plays Loreley; a beautiful woman who lives in a grotto by the river, and who turns into a blood-thirsty, scaly, reptile-like creature when the moon is full.

The school needs protection. They need the best man there is. And they find him: Sirgurd! Sirgurd is played by Italian star Tony Kendall (the Kommissar X series) -- and what a guy he is. If I could change my looks; if I absolutely had to, I’d say I’d like to look like Tony Kendall in 1974. Sirgurd may be a famous professional hunter, but he sure doesn’t look, behave and dress like one. This guy is a swinging playboy and a fashion victim. Dig that haircut and those sideburns! Dig that wardrobe! Those pants! Sometimes, he changes outfit for every new scene. He also likes striking poses. 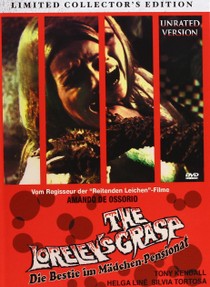 The girls immediately forget that their friends are being brutally slaughtered one by one -- well, they didn’t seem to give a shit to begin with, they preferred playing around in their bikinis. And when Sirgurd shows up, the students rush to their rooms and slip into their sexiest outfits. The strict Elke doesn’t like Sirgurd -- but it doesn’t take long before he seduces her and takes her on a romantic boat ride.

Sirgurd doesn’t do a very good job protecting the girls, though. He sleeps in a barn and doesn’t seem to patrol the estate. But eventually he runs into Loreley. And guess what happens! Since Sirgurd is the Coolest Man Alive, Loreley falls for him. Yes, Our Man manages to seduce her as well. But he can’t really trust her, and he’s brought to her grotto where a couple of beautiful but evil chicks are waiting for him. But wait! Sirgurd is so damn hot these new, evil chicks start fighting each other over him. While the girls fight, Sirgurd escapes and the grotto falls apart, and then there’s some kind of romantic ending with Loreley disappearing, saying she’ll always love him and that she’ll be waiting for him. Or something like that. 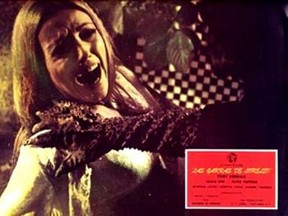 As you can tell from this summary, “The Loreley’s Grasp” is great. It’s also pretty good looking; it’s very colorful. The music score by Antón García Abril is really cool, when Sirgurd is around, we get some nifty hammond organ party music and a funky bass.

When ever the Loreley monster kills somebody, the creature rips the clothes of the victims, so their boobs are exposed. Wonderful. And then there are lots of close-ups of skins being ripped open and buckets of blood gushing. It does however look a tad cold when Loreley is running around by the river only wearing a fancy bikini -- the place looks a little barren and the weather is gray and dull.

“The Loreley’s Grasp” wa re-released on video in the States as “When the Screaming Stopped.” Stupid title, but if all movies were like this one, we’d live in a better world! 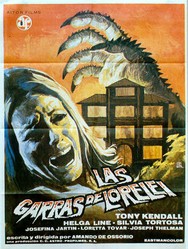