When "The Nesting" was released on video 30+ years ago, it had a sleeve nobody could resist.

Armand Weston's little horror movie "The Nesting" is a rather obscure thing which few seem to be aware of. However, the film does have a fan-basis, and the movie is fondly remembered by the ones who rented it in the early 1980s. John Carradine and Gloria Grahame appear in this movie and here is a review of it. 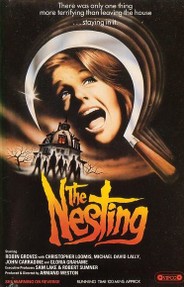 I was very fascinated by the video sleeve for “The Nesting”. I had seen the video in a couple of video stores, but never the movie itself. I remember a guy in my class saying that “it was cool when a guy walked into a room and chopped everybody up with a scythe”. Just like “Embryo”, this must be the most horrifying horror movie ever made!

My grandparents lived in a small town some miles from where I lived. My grandfather was a mason and he had built the piss-yellow apartment house in the 1930s (no, not all by himself), and then moved in there. My dad grew up in the very small two room apartment. On the ground floor, the local soccer club had their office, and for e few years in the early eighties, there was a video store just next to it. I remember they had a huge poster for Al Adamson’s “Freeze Bomb” (aka “Death Dimension”), starring Jim Kelly and George Lazenby.

… And they had a poster for “The Nesting”. Whoa. That looked sooo cool. My parents didn’t agree. But when I think of that rather ugly building, I still think of it with that video store -- and those two posters in the window -- on the ground floor. And that store closed down almost 30 years ago. 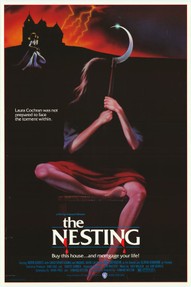 Then in the early ‘90s, I got hold of an old ex-rental copy of the video. Finally! I was about to watch “The Nesting” -- a movie I’ve read quite a lot about. Nothing positive, though. And after having seen it, I could tell that my classmate sure hadn’t seen the movie; there is no scythe massacre in this movie, which turns out to be at pretty low-key haunted house tale.

Robin Groves of “Silver Bullet” plays novelist Lauren Cochran, who suffers from agoraphobia. She goes to a shrink and then decides to leave New York City and rent a nice, calm place in the countryside, where she can finish her new thriller. Lauren writes Gothic mystery novels -- you know, those paperbacks with women running from houses on the cover.

Lauren finds the perfect place. A magnificent, octagonal old house -- and not only that. The damn house also looks exactly like the one Lauren describes in her last novel “The Nesting”, and like the house on the cover, painted by an artist who just followed Lauren’s descriptions. Lauren has never been to the place.

It doesn’t take long before our poor heroine realizes the house is haunted. By prostitute ghosts! Lauren tries to find out exactly what happened in that house, and it turns out it once was a brothel. And back in the 1940s, there was a massacre there -- we see a glimpse of it in the movie’s prologue, before eventually getting a long, detailed shotgun blood-bath. In slow-motion.

Nobody wants to talk to Lauren about the old brothel and what happened there. And when Lauren tries to talk to people, they usually end up dead. One fellow; the alcoholic handyman, is attacked by poltergeists and then chased into a lake where he drowns. Another oddball goes crazy, and after a fight, a car chase, and yet another fight with Lauren, our heroine gets hold of a scythe, which she chops into the creeps face. That’s all. there’s a big scythe on the movie’s poster; that’s the first thing we see, so it’s easy to believe this is a movie about a scythe wielding maniac. But this scene is over in a couple of seconds.

It all comes together in the end. I can’t say the ending is very good, though, it’s a tad silly and too much -- and a little abrubt. But horror movie endings have a tendency of being disappointing. Otherwise, this is a pretty nice little ghost story. Cozy. Gloria Grahame has a part in the movie, it was her last role before she died in 1981, the same year the movie opened, at age 57. John Carradine also has a small part in the movie; it’s more or less a glorified phone-in-performance. But the real star of the movie is the fantastic house Lauren moves into.

Blue Underground has released “The Nesting” on DVD and Blu-ray. Unfortunately I haven’t seen that release, which is said to be a huge, huge approvement over the old VHS releases. The version I’ve seen a couple of times is dark and murky, it’s sometimes pretty hard to see what’s going on, and some scenes give a whole new meaning to the phrase “talking heads” -- all you can see is a pale face or two in compact darkness.

I still find this an enjoyable movie, though. It’s made with a certain style, it doesn’t look rushed, director Weston know how to make movies. “The Nesting” is far from a classic and it doesn’t live up to its poster, but it’s a nice way of spending a couple of hours.

“The Nesting” was re-released in the States as “Massacre Mansion”.