I don’t remember when I first stumbled upon the title “The Torture Chamber of Dr. Sadism”, but it’s several years ago. Who can resist such a title? It sounds like something that makes “Saw” and “Hostel” look like “Postman Pat."

This movie was directed by Harald Reinl, a gentleman I would say was Germany’s most interesting director. I know absolutely nothing at all about Reinl and think a book written in a comprehensible language would be appropriate, but his filmography says quite a lot about his very cool career.

Harald Reinl directed several Edgar Wallace movies; in the 1960s, two competing German production companies made a long series of moody Wallace adaptations, some of them co-starring Klaus Kinski. Reinl also made a few Westerns about Winnetou, he squeezed out a handful Jerry Cotton flicks, and even one entry in the amazing Kommissar X series (Google these characters if you don’t know who they are). And he made a couple of horror movies.

A fact we tend to forget, is that Germany has a pretty nice tradition when it comes to horror - when we discuss Euro-horror, we usually think of England, Italy and Spain. Well, we do mention “Nosferatu," “Der Golem” and other German classics from the silent era, but it’s easy to forget about the productions from the 1960s.

“The Torture Chamber of Dr. Sadism” opens with a few scenes from early 19th century. Count Regula (Christopher Lee) is sitting in a dungeon, and, well, he ain’t Mr. Sunshine, since a couple of grim guards and a masked executioner come to fetch him. Regula is sentenced to death after murdering 12 virgins, which of course is one hell of a behavior. The count aimed at killing 13 lasses, because that would have given him eternal life, but the rotten bastard didn’t get around to it before he was caught.

Regula is dragged out in a square, where he’s to be drawn and quartered -- his arms and legs are tied to four horses, running in four directions. People sure are having a ball in that square! Families party and cheer as the count is divided into five parts.

After this, we skip 35 years into the future. Lex Barker (Tarzan) plays Roger, son of the man who once accused count Regula. He’s received a mysterious invitation to an even more mysterious castle. On the way there, he meets the baroness Lilian (Bond girl Karin Dor, who was in several German cult classics), who’s also received an invitation -- and guess what, she’s the daughter of the woman who was supposed to be that 13th victim. Roger and Lilian run into a jovial, loud and hard-drinking priest, who accompanies them.

The stagecoach ride gets creepier and creepier. People they ask have never heard of the castle. The coachman is so scared he hardly dares continue the journey. They travel through a forest in which dead men are placed on the branches of the trees. They stop by the ruins of a castle where they meet a mysterious man, who disappears as soon as they leave the ruins -- which immediately collapse. And a little later, they enter a very dark forest in which dozens of corpses, nooses around their necks, are hanging from the trees.

Finally, they arrive to the castle where they’re greeted by the same mysterious man they met in the ruins. And yes, they’re now prisoners in the castle. In one of the halls, count Regula’s body (all five parts of him) is kept in a glass coffin. The servant drips blood on the coffin, and the good count is resurrected.

In another chamber, the 12 murdered virgins are draped over furniture in a most bizarre way. Regula’s plan is of course to get revenge -- Lilian is about to become the 13th victim so that the count can become immortal, and Roger must die because ... Well, he must die. Therefore, Roger is strapped to the floor of a pit where snakes crawl around him, and above him, a razor sharp pendulum starts swinging to and fro while slowly getting closer to Roger’s chest.

Thankfully, Roger manages to break free at the very last second. He comes up with a way of killing Regula, and as Regula turns into dust, the 12 dead girls disappear as well. Roger and Lilian fall in love with each other, and they laugh happily as they travel back home.

I was very surprised by “The Torture Chamber of Dr. Sadism." I’ve checked out quite a few Italian, Gothic horror movies from the ‘60s lately, and even if these often are very atmospheric, they’re also often rather slow and boring. Harald Reinl’s movie is not -- on the contrary, it’s very entertaining. It also manages to be inspired and atmospheric. The scenes with the corpses hanging in the woods are exquisitely macabre. The castle, with its chambers and killing machines, is fantastic. I guess the budget was rather low, which makes this movie even more impressive. Beautiful color cinematography doesn’t make it any worse.

The only thing that feels strange are a few happy scenes, like the very last one, which are scored with very groovy, German party music. Totally inappropriate -- and therefore pretty damn charming. 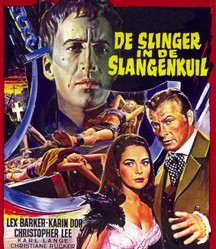