A review of the classic Spanish horror thriller. Written and directed by Narciso Ibáñez Serrador.

"Who Can Kill a Child?", written and directed by Narciso Ibáñez Serrador and released in 1976, is a truly creepy horror thriller about a British couple vacationing on a small island, inhabited only by children? Where are the adults? The secret of the island is truly terrifying. Will the couple live to tell? 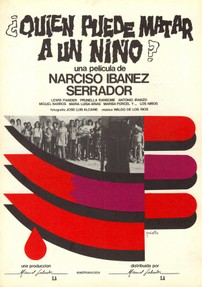 Some time in the late 1970s, I saw something on TV that was really, really eerie, it gave me the creeps and the images followed me for decades. A sunny, south European town. Whitewashed houses. A man and a woman walked slowly along a street -- and bunches of sinister looking children were staring at the couple.

That’s all I remember. Probably all I saw. It looked very strange and moody. I eventually heard about a Spanish movie from 1976 called “Who Can Kill a Child?”, and my guess is the scene(s) I saw on TV were from that movie. I’m pretty sure they didn’t air the full movie, so it must have been a show about movies, maybe a critic reviewed it and showed a clip or two from it. But as I wrote above -- I never forgot the chilling images.

Narciso Ibáñez Serrador’s (who still making movies) “¿Quién puede matar a un niño?” has lots of alternative titles. “Death is Child’s Play,” “Island of Death,” “Island of the Damned,” “Trapped,” “Would You Kill a Child?” and several more, but it’s usually referred to as “Who Can Kill a Child”. And no matter what title the print, poster or DVD-release carries, Serrador’s movie is often regarded as both a classic and a masterpiece. 35 years after it premiered in Spain I’ve finally seen the movie. Do I agree with my colleagues? Is this a masterpiece?

Based on a novel by Juan José Plans and adapted for the screen by the director, “Who Can Kill a Child?” opens with grim, disturbing documentary footage of children suffering the horrors of war. World War II, Vietnam, Biafra and so on. Then the gritty, black and white images fade to color and we’re introduced to a young English couple; Tom (Lewis Fiander) and his pregnant wife Evelyn (Prunella Rensome), vacationing in sunny Spain.

Having fun in a crowded city where people are celebrating (Evelyn is fascinated by kids playing with a piñata), they decide they need to go to a more quiet place. Tom suggests they should go to a nice island nearby he had visited ten years or so earlier, so they rent a boat and off they go. 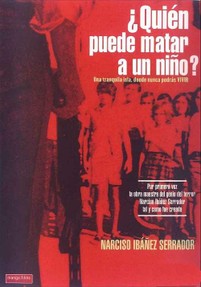 After arriving to the island, they’re greeted by playing children. It’s a very hot day and it doesn’t take long before they realize the streets of the small town with picturesque, whitewashed houses are deserted. They find a bar, but nobody’s there. The shop next to it is also empty, and so is the hotel. The children seem to be the only ones on the island -- and they sure behave in the weirdest ways.

These kids hardly speak. They maybe say a word or two. Some of them are just staring at the two adults, while others smile or laugh in a creepy way. Tom and Evelyn spot an elderly man who’s attacked by a little girl who beats the old guy with a stick. Tom tries to save the man and carries him to a stable, he leaves the stable for a moment, and when he returns, a bunch of laughing children have hoisted the dead body up in the roof and treat him like a piñata -- they hit him with sticks and sickles.

Tom understands they’re in big trouble, but doesn’t want to worry his wife. He fails, of course -- she’s very worried. Especially after meeting another man, a lonely guy who’s survived this far. They also receive a phone call from a panic-stricken young woman who’s barricaded herself elsewhere in the town.

The children have of course murdered all of the adults on the island. It also seems like these sinister kids can make normal children turn evil just by eye contact or by touching them. Maybe this is some kind of vengeance, they’re getting even with the adults who’ve made the children of the world suffer through out the ages.

Finally, Tom and Evelyn are the only adults left on the island -- at least the only ones alive. Tom gets hold of a machine gun, but the big questions are: can he really kill a child? And what will happen if he does start killing them? And what about the unborn child in Evelyn’s womb … ? 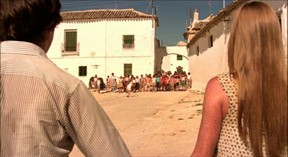 I wouldn’t say that “Who Can Kill a Child?” is a masterpiece. At almost two hours, it’s a tad too long. And some of the dialogue is a little awkward, like when Tom and Evelyn discuss Fellini’s “La Dolce Vita.” But otherwise, this is a very good movie! It’s reeking with atmosphere and it’s actually thrilling and exciting for real. These children are actually scary. Yes, the story does of course make me think of Stephen King’s “Children of the Corn,” which was written after the release of this movie, but Serrado’s movie is much, much stronger than King’s short story and the silly movies based on it, and Serrado’s kids are much scarier.

One interesting aspect of “Who Can Kill a Child?” is that most of it takes place in broad daylight. Maybe that’s what’s makes it so eerie. At a first glance, everything looks so picturesque, but we can sense there’s something terribly wrong here. A couple of scenes make me think of other movies, like Hitchcock’s “The Birds,” scenes where the children slowly and silently gather in the streets and squares of the empty town.

“Who Can Kill a Child?” is a terrific movie. It’s a classic and a must-see. Check it out!

Thanks. It is worth watching! Beware of the remake, though. "Come Out and Play." Came out in 2012. I haven't seen it, but it's said to be totally pointless when you can watch the superior original instead. http://www.imdb.com/title/tt2341664/?...

I am a fan of horror flicks. But they have to be well written and executed. You make this one sound worth watching. 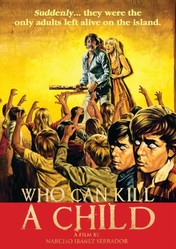