It took me over thirty years before I got around to sit down and actually watch this movie. Whitley Strieber is a well-known novelist, but only three of his books have been films. "The Hunger," "Communion" and this one. I was hoping for a classy, big-budget monster flick. What I got was something different ... 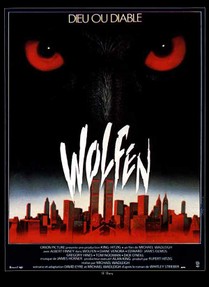 I’ve always thought that “Wolfen”, the only feature film directed by Michael Wadleigh (who made several films about Woodstock), was a good movie. A classy, big-budget, well-crafted horror movie. I never saw it while it played theaters, and even though I remember seeing it on the shelves in video stores, I never rented it.

I seem to remember I had the novel by Whitley Strieber (called “The Wolfen”, with a “The”) the movie is based on. For some reason I never read it, I had it in my “to be read pile”, but then it magically disappeared.

Now I’ve finally seen the movie, thirty years after its initial release. And I was disappointed. No, this wasn’t what I had expected. “Wolfen” isn’t a very good movie.

I liked the opening -- simply because the opening titles use a font quite common in big-budget horror movies and thrillers of the 1970s and early ‘80s. But then it goes downhill -- which it really shouldn’t, since the story is pretty cool and the cast is good. 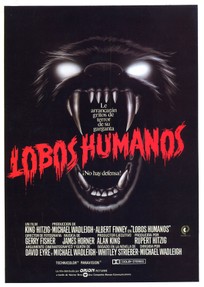 People are found dead in New York City. Mutilated. They look like they’ve been torn apart by beasts. Animals? Wolves? Maybe even werewolves?

The cop trying to solve the case is a certain Dewey Wilson, almost always chewing on something; the guy is always eating. Wilson is played by Albert Finney, one of those famous British character actors, this time not only sporting an American accent (at least most of the time), but also an absolutely ridiculous haircut. Or lack of haircut. What the hell is that, Finney? Did you go to a women’s hairdresser?

As the story progresses, Dewey finds out that the killers aren’t human, or wolves -- they’re wolfen. Some kind of upgraded wolves. Super-wolves. Dewey hangs out with Indians and learn about old legends, wolf spirits, shapeshifters, and Edward James Olmos, playing one of the Indians, gets naked and runs around on a beach, howling at the moon.

Dewey’s partner is played by Gregory Hines, Tom Noonan pops up as a lab technician who has a stuffed wolf in his office. 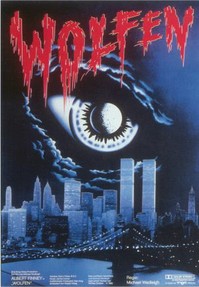 … But the movie just doesn’t work. Why? Mainly because of two reasons. One reason is that I find Dewey Wilson a rather unlikable character. He’s not the most sympathetic hero I’ve encountered -- and the constant eating is pretty silly.

The biggest problem is the wolfen POV shots that appear every time somebody is about to get killed, while they’re killed, and, well, every time the creatures are roaming the city by night. These POV shots are filmed with distorted colors, reminiscent of the POV shots in the Predator movies. And there aren’t just a couple of those shots. It feels like half the movie was shot with a night-vision, heat-seeking camera. It looks extremely cheap and is very, very annoying.

The movie’s score sounds very familiar -- it sounds like outtakes from “Aliens”. And there’s a reason for that: it’s composed by future Oscar winner James Horner, who later provided the score for, yes, “Aliens”.

Michael Wadleigh was supposedly very unsatisfied with the version of “Wolfen” that was released. I’ve no idea what he wanted to alter, but this movie just isn’t very thrilling or exciting, although it has all of the ingredients needed to make a cool movie. Plus a butt-naked Edward James Olmos.

Ha ha -- and that comment reminds me of when my aunt told me everything about "Jaws" back in 1975!

Wow! This brings back memories. I was only nine when this came out, but I recall standing in my auntie's kitchen while she told me the story. I was utterly engrossed! It must have made an impression, as I can remember everything now, including how the room looked etc. I felt so grown up to have been let in on the plot! 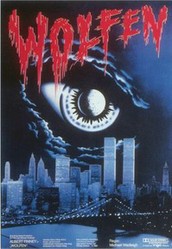