A look at Ralph Nelson's 1976 horror movie starring Rock Hudson and Barbara Carrera. Is it really as bad as you've been told the past 35 years?

"Embryo" is 1976 American horror movie which sported a poster that made a huge impression on me when I was a kid. It did however take me several decades before I actually managed to see the movie.
This was supposed to be a big, high concept horror flick, but it didn't turn out very well. "Embryo" has a pretty bad rep -- and here's a review of it. 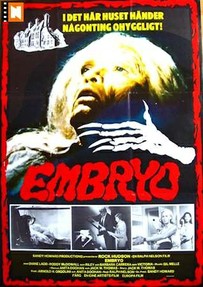 Back in 1980, I started collecting every video catalog I could get my hands on; the glossy -- or not so glossy -- publications you could pick up for free in video stores; page after page crammed with tempting, fascinating, cool or frightening artwork and copy for the latest releases. My parents had gotten so scared after an anti-video violence talk show in 1980, they refused to buy a VCR for several years, afraid that loads of chainsaw wielding psychos would automatically pour out of it when they plugged it in. So it’s of course not very surprising that I became the guy I am today and that I 30 years later have seen more violent movies than most people.

Anyhow, even though we didn’t have a VCR at home, I used to sneak around in the video stores, drool over the video sleeves, ant fantasize about how incredibly good these movies must be. And I picked up the catalogs.

One of these catalogs featured the sleeve for Ralph “Soldier Blue” Nelson’s “Embryo” from 1976. I remember I thought the movie’s logo looked cool -- and the still from the movie was scary. I imagined this must be one of the creepiest, most repulsive horror movies ever made -- and I had of course absolutely no idea what “Embryo” was about. I’ve wanted to see the movie ever since.

During these past years, the movie has popped up every now and then. No, not the movie itself, but it’s been mentioned in articles and I’ve read reviews of it. It’s said to be utterly silly, a fiasco if there ever was one. I found an old novelization of the movie, but I just put it in my bookshelf without actually reading it.

… But now I’ve seen it! “Embryo” has ended up in public domain, since they forgot to copyright it -- well, this sounds a tad unlikely, I’ve no idea if this really is true, but nowadays the movie is available in the U.S. and the UK on a couple of shitty DVD:s, struck from what I guess are old VHS masters. Fullscreen, slightly fuzzy picture, and the sound isn’t the best. But what the hell, now I’ve seen the damn film! 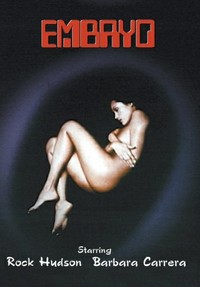 Rock Hudson is Dr. Paul Hollister, who lives in a big house along with his sister-in-law, played by Diane Ladd -- another one of those old bat roles she’s specialized in. I’m not really sure why our doc is living with her, but that might be because the sound was so crappy I couldn’t hear everything that was said at the beginning. Anyway, when the movie begins, Dr. Hollister runs over a dog during a violent thunderstorm (and thanks to the sound I don’t know if it maybe was Hollister’s dog). The doctor brings the dog home, and it turns out it’s pregnant. Hollister is working on a bizarre project; he’s trying to develop fetuses outside of the womb, so he uses two dog fetuses for his experiments. One dog survives and grows up into the brightest and smartest dog in the world.

When Hollister comes up with the idea of growing human fetuses, the movie feels like a precursor to David Cronenberg’s “The Brood”. He talks to a surgeon (Jack Colvin of TV’s “The Incredible Hulk”), who one stormy night calls Hollister when a pregnant suicide victim has been brought in to the hospital. Hollister is given the fetus, and what do you know, within soon he has a little baby in the incubator in his basement. But that’s not enough. The little girl is growing at breakneck speed, not Hollister doesn’t manage to stop her from growing until she’s grown into Barbara Carrera.

Hollister names his experiment Victoria Spencer and educates her -- also at breakneck speed. She becomes what seems like the brightest, most clever woman in the world. We’re about halfway into the movie by now, and this far it’s not much of a horror movie. But now it’s time for Hollister to show his young and beautiful “assistant” to others, so he brings Victoria to a party, where she immediately charms everybody and plays chess with a chess champ played by Roddy McDowall making a special guest appearance. Victoria lets McDowall win, resulting in him over-acting like there was no tomorrow, and then disappearing from the movie after just a couple of minutes screentime. 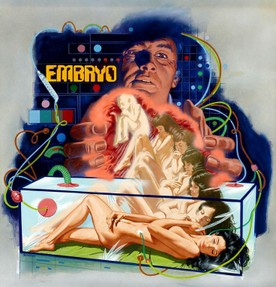 The ending is getting closer, and it’s still no horror movie. Then Victoria suddenly gets a stomach ache. She gets cramps every now and then, but doesn’t tell the friendly doc. Since she’s so incredibly intelligent, she tries to solve the problem herself. First she goes to an absolutely amazing computer central. A playboy she met at the party works there and he tells Victoria to tap in a question on a keyboard, and then the answer comes out on a small piece of paper in another part of the room -- this computer does of course fill the entire room.

Then it turns out that Victoria needs fetuses! She needs to chomp down on them to survive. What to do? She finds and kills a prostitute. Then Hollister’s son’s fiancée pays a visit, she’s also pregnant, so Victoria puts her to sleep -- but before she manages to do anything, Hollister and his son rush into the room and there’s a fight. The son gets a syringe in his back and dies! Victoria, who’s now aging rapidly, escapes in a car and Hollister follows her. After a wild car chase, Victoria drives off the road, crashes and her car is set on fire. Cops arrive and see Hollister trying to kill Victoria, who’s now turned into an old hag (this was the scary image used on that old video release). Hollister is stopped, Victoria is saved, the movie fades to black -- and we hear a baby screaming. Yup, Victoria was pregnant!

“Embryo” is a very lame movie. It was promoted as a horror movie, but it’s more of a thriller. If that. The movie is reminiscent of an old TV movie. A silly story that according to a title card at the beginning isn’t science fiction.

At the same time, there’s something nice and cozy and homely about the movie -- if you like American movies from the 1970s. The movie is pretty glossy and features several familiar faces. I always get nostalgic when I watch things like this. The movie may be rotten, but I still enjoy it. I hope somebody will release an official DVD of “Embryo”, with good picture and sound quality. 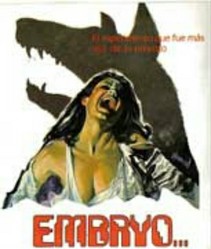