I purchased this yesterday for lunch. Read to find out why I don't recommend it.

Product Description: Frozen three cheese ziti dinner from the Banquet brand that is prepared in the microwave and takes about 3-4 minutes to prepare. I found this in the freezer section at one of our local grocery stores yesterday morning for around $2.50. I ended up purchasing it and made it for lunch yesterday afternoon, preparing it in the microwave per the instructions on the box.

Not Worth the Money 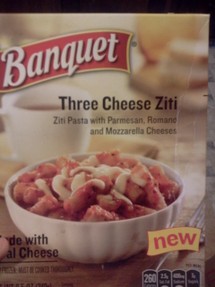 My wife and I had to do some last-second shopping yesterday before Christmas and one of our stops was a local grocery store so we could pick up some shrimp and frozen pies as part of Christmas dinner at my parents' house.

While we were in the freezer section, we noticed the Banquet Three Cheese Ziti Dinners and, since it looked good on the box and we knew we would need something for lunch anyway, I decided to purchase this product.

At the time, we had a choice of other, less expensive frozen dinners. However, because the box made this dinner look so appetizing, i decided to spend the extra money. As it turns out, it was a mistake.

There were a couple things I found I did not like about this product. The first was the quantity. The three cheese ziti dinner came in a box that was larger than what some of the less expensive dinners came in and, because of that, I was quick to assume the larger packaging meant I was getting more for my money. That was not the case at all and there wasn't any more ziti in this dinner than I would expect to see in several brands of dinners that would have only cost me around $1.

I probably would have been able to overlook the smaller quantity had this dinner offered some sort of quality. But, it also failed in that category. It wasn't terrible but it wasn't all that good either. Again, had this been a cheaper dinner, I probably could have overlooked that. However, as I mentioned, this was considerably more expensive than those dinners and, once again, it offered nothing to justify the higher price.

Don't let the packaging fool you, this is a low-quality dinner that you would normally expect to spend about $1 on. I would not recommend making my mistake and spending more money on it than it is worth.

StevenHelmer, Thank you for practical information, pretty pictures and product lines.
It's disappointing when content does not live up to packaging. You previously have mentioned the importance of preparation, price, quality and quantity in your grading scale.

Would a different combination of cheeses as well as more ziti have made a difference? 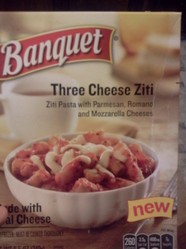 A review of the pre-packaged pasta side dish I purchased a couple days ago.
75%  1   12 StevenHelmer
Other Food & Cooking