I purchased this at the store the other day and made it to go with dinner last night. Read to find out what I thought of it.

Product Description: Frozen rice and vegetable product from the Birds Eye Steamfresh brand. I purchased this item at one of our local grocery stores over the weekend while it was on sale for $2.50. I ended up making this in the microwave last night to go with a pork chop dinner I was making for my family.

It had been a while since my wife and I had done some serious grocery shopping for our house. So, since the kids were at my parents' house and my wife was lying down, fighting a headache, I decided to run to the store and spend part of my paycheck stocking up on food.

I didn't originally plan on buying items from the freezer section since our freezer was already pretty full. However, I saw the store had a sale on some items, including the Birds Eye Southwestern Style Rice. I ended up purchasing a couple bags of the rice and, when I made pork chops for dinner last night, I picked that as a side dish.

The last time I cooked an item from this brand, I wasn't paying attention to the instructions and ended up having to make it on the stove. This time, I did pay attention and cooked the rice in the microwave. This proved to be a nice convenience because I could work on other food items while it was cooking. Plus, it only took about four minutes.

As far as taste goes, I really had no complaints. In the future, I probably would save this for a darker meat, like steak. But, the overall flavor was decent. The peppers that were mixed in with the rice, along with the light blend of seasonings gave it a somewhat bold taste that really stood out while the corn added a little extra to it too.

Quantity wise, the rice was lacking a bit. I thought there would be more in the bag than there was and ended up having to make the second one I purchased. However, that being said, the rice did prove to be filling and, while I still would have needed to make the second bag, it is worth noting there was some leftover. And, at least at the reduced sale price, I do think this was worth the money I spent on it.

As I said, the bold flavor really does make it a better complement to a darker meat, like steak and I'm sure there will be some people out there who may not like it at all. However, I thought this was a decent-tasting product and I would definitely consider purchasing it again, especially if I were lucky enough to find it on sale again.

StevenHelmer, Thank you for practical information, pretty pictures and product lines.
As I've mentioned previously with your wizzleys about prepared foods, I appreciate knowing which brands are there for me when I need to make more -- for more guests or more re-servings -- than what I make up fresh. Also, I like anything that gets children and ;-D kittens ;-D to eat their vegetables.

Would these riced vegetables have worked with the fish that had the disappointing Green Giant cauliflower medley riced veggies?

I want you to know how much I enjoy your food articles. Me, and I am sure many others, find them so useful. I am a spaghetti lover, so I really love your pasta & sauce reviews!

A review of the Our Family brand Grilling Style Baked Beans that are availabl... 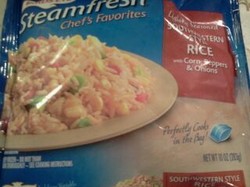 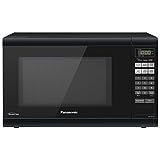 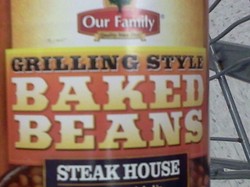 A review of the Our Family brand Grilling Style Baked Beans that are available at select grocery stores.
18%  1   2 StevenHelmer
Other Food & Cooking

I purchased this to go with dinner last night. Was it worth the money I spent on it?
Loading ...
Error!