I purchased this to go with dinner last night. Was it worth the money I spent on it?

Product Description: Frozen Asian entrée consisting of bite-sized pieces of chicken that can either be fried or baked and two packets of General Tso sauce to put over the cooked chicken. I purchased this product yesterday at one of our local grocery stores for a little less than $5 for the bag and prepared the chicken as part of a home-made Chinese buffet last night.

Not as Convenient as I Hoped but Worth the Money 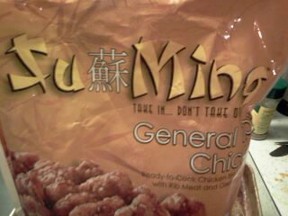 I decided on this particular product for dinner yesterday because it has been a while since my wife and I had lunch at our local Chinese restaurant and I figured it would be something different while not requiring a great deal of work. The fact this, and the additional Asian foods I picked up to go with it, ended up being more affordable than the restaurant was a big plus too. And, for the most part, I do think this was a good purchase.

One thing I did find I was somewhat disappointed by when I first opened the bag was the fact the chicken did not already have the sauce added to it. As I’ve mentioned in other reviews, I purchase items like this for convenience and, since I can’t really see the point of keeping the sauce separated to begin with, don’t really feel having to prepare that part of this entrée separately really fits that description, especially when I was trying to prepare other foods at the same time.

That being said, I did find I enjoyed this product. The sauce was a bit on the spicy side and it was pretty obvious the chicken had been pre-processed and frozen. However, overall at least, it had a good flavor to it and my wife and I found we enjoyed this frozen entrée more than we enjoyed the General Tso chicken our local Chinese restaurant prepares.

Another thing I discovered about this product is it was very filling. As I mentioned, I made other side dishes to go with this but, as it turns out, we probably would have been just fine with this chicken and maybe a side of rice. The fact we did have enough left over for another meal did add some value to it as far as money is concerned.

I still wish they would have added the sauce ahead of time so there was a little less work overall. However, I do think this was a good product that was well worth the money I spent on it and would recommend it if you are looking for a Chinese entrée for dinner.

I have been trying to find this at my grocery store. Ran into the girl that orders today and said they cancelled the orders. This was the best Gen. TSo I have eaten next to Lyn Garden's in Jasper. We added a little extra red pepper flakes and fixed rice and it was great. Would love to know who still carries it. I hate it when something is good and it stops.