I picked up a jar of this to use with dinner a couple nights ago. Read to find out what I thought about it.

Product Description: Jarred "original recipe" tomato pasta sauce from the Francesco Rinaldi brand. I purchased a jar of this sauce at one of our local grocery stores a couple days ago, when I found it on sale. I ended up using the sauce with dinner later that evening, when I made chicken parmigiana for dinner.

My wife was busy with something a couple nights ago and, because of that, I ended up being in charge of making dinner. Since we had some leftover spaghetti in the fridge and chicken in the freezer, I decided to make chicken parmigiana for the family.

I needed pasta sauce, so I ended up running to one of our local grocery stores. I didn't have a brand preference and this one happened to be on sale so I picked it up.

I've had this sauce before. But, it had been a while since I had purchased it and I couldn't remember much about it. After trying it again, my overall opinion fell into the "meh" category.

I'll start out by saying I liked the thickness of this sauce. A lot of times, I'll get a jarred sauce like this and it will be almost soup-like. While this wasn't the thickest jarred pasta sauce I've purchased, it was thick enough and, because of that, one jar was enough for our meal (with thinner sauces, I usually have to buy two jars).

As far as taste goes, this sauce was definitely lacking something. There were some seasonings in it, so I can't say it was completely bland and, at very least, I didn't need to put a heavy layer of cheese on it to make it edible (as has been the case with other brands). But, there really wasn't anything special about it. It wasn't terrible, but it wasn't memorable either. And, to be perfectly honest, if the sauce hadn't been on sale, I don't think it would have been worth the money.

It's an OK sauce. But, as I said, there wasn't anything overly special or memorable about it. It might be good in a pinch. However, I wouldn't recommend purchasing it unless it is on sale and there aren't any less-expensive alternatives.

StevenHelmer, The product label surprised me with the listing of imported pecorino romano cheese, which only is produced in Grosseto and Lazio and on Sardinia. Insular and peninsular recipes tend to be local in the ingredients and the preparation. Perhaps it would have been tastier with a Sicilian sheep's milk cheese equivalent.
What was the mark-down on the bottle?

My wife picked up a package of these a few days ago. Read to find out what I ... 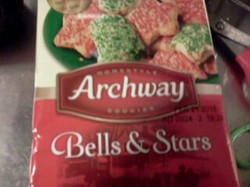 My wife picked up a package of these a few days ago. Read to find out what I thought of them.
78%  2   15 StevenHelmer
Other Food & Cooking