A review of the Hamburger Helper variety we recently purchased and had for dinner last night.

Product Description: Pre-packaged meal consisting of pasta and a cheesy ranch sauce mix and prepared on the stove by adding browned hamburger, water, milk and either mayonnaise or sour cream. My wife purchased this product a couple weeks ago at one of our local grocery stores for a little more than $1 and I ended up preparing it per the instructions on the box as part of last night’s dinner. 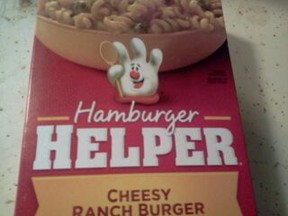 A couple weeks ago, my wife found Hamburger Helper on sale at one of our local grocery stores and, figuring it would come in handy on days when we were too busy to make other dinner plans, picked up several boxes. One of the varieties she picked up was Hamburger Helper Cheesy Ranch Burger.

We haven’t had an opportunity to do any real grocery shopping the past few days and, as a result of that, didn’t have much to choose from in the house last night. So, since I did have a pack of hamburger, we decided to give this product a try. Our overall opinion of it was mixed.

Much like most Hamburger Helper products, this wasn’t too difficult to make. I just needed to brown the hamburger, drain the grease and add the additional ingredients while cooking this on my stove. In total, it took me about a half hour to make this. And, as is also usually the case when we make Hamburger Helper, the box did make enough for us to have a filling dinner (at least when we had a salad to go with it) with enough leftovers for me to have this again for lunch earlier today.

I also thought this tasted pretty decent. There was a strong cheese flavor to it and I did enjoy it more than some other boxed dinners we’ve purchased, including some from the Hamburger Helper brand.

That being said, I really didn’t think there was anything overly special about this product. This is because, even though I didn’t hate how it tasted, I honestly wasn’t able to notice any significant difference between this variety and several other similar Hamburger Helper varieties.

This is because, even though I could faintly taste the ranch taste that was promised, I also had to concentrate really hard even to notice it. The cheese flavor, which, again, is similar to many other Hamburger Helper varieties, was just too strong and easy overpowered any other intended flavors. If it weren’t for the box, I probably would never have known there was supposed to be something different about this.

As I said before, this was an OK product and I really did find I enjoyed it. There just wasn’t anything special about it and, because of that, I have no reason to recommend this over any of the other Hamburger Helper varieties you can choose from.

StevenHelmer, Thank you for product lines, pretty pictures and practical information.
It can be so disappointing when image and write-up are not quite backed up by reality.

Did you all opt for mayonnaise or sour cream? And do you all find a use for the grease? Would it be too greasy, and would it fight with the sauce taste to drizzle it back over the burger or onto the pasta?

We ended up making this for dinner last night. Read to find out what I though... 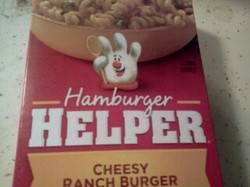 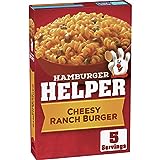 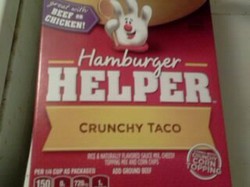 We ended up making this for dinner last night. Read to find out what I thought of it.
75%  1   12 StevenHelmer
Other Food & Cooking