A review of the cold breakfast cereal my wife purchased at Wal-mart a couple weeks ago.

Product Description: Cold, whole grain breakfast cereal from the General Mills brand based on and meant to copy the Hershey’s Cookies ‘n’ Crème chocolate bar. My wife bought a box of this cereal at our local Wal-mart Supercenter (I believe she spent about $2.50) and my family has been eating it for the past couple of weeks, finally finishing the box over the weekend. 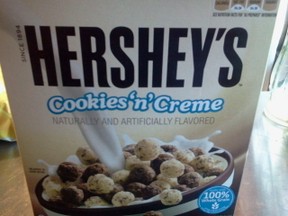 We don’t do a whole lot of grocery shopping at Wal-mart, both because we prefer to support our locally-owned grocery stores and because, despite claims to the contrary, we almost always end up spending less money overall at those stores.

However, there are times when we do need to make a trip to Wal-mart and, when we do, we admittedly will find items we wouldn’t normally be able to find around here. And, the Hershey’s Cookies ‘n’ Crème Cereal was one of those items.

I wasn’t really sure what to think about this item when my wife first purchased it and brought it home. It sounded interesting. However, it was one of those products that could either be too sweet (one of my biggest pet peeves when it comes to breakfast cereals) or surprisingly tasteless. As it turns out, the cereal wasn’t too bad. It just wasn’t anything overly special either.

As I mentioned before, my biggest concern was whether or not this would end up being too sugary. I don’t mind sweet foods, I just don’t like them first thing in the morning and my daughters are pretty much the same way. As a result, if the cereal was too sweet, there was also a very good chance it would just get left in the pantry, uneaten, until it went stale and we had to toss it out.

This, however, was not a problem. The cereal had a sweet taste to it (my wife described it as a combination of Cocoa Puffs and Kix) without being too strong. And, because of that, we did manage to eat the entire box.

Unfortunately, that was about the only positive thing I really could say about this. Despite the “cookies and crème” claim, I really didn’t taste anything that would make me think that if I hadn’t seen the box. In fact, there really wasn’t anything about this cereal that made it overly memorable. I had a couple bowls of this and my family finished it. But, it wasn’t a cereal that had me craving a second bowl shortly after eating it or anxious to get to the store to buy another box. In other words, it was good. It just didn’t have anything that really made it stand out from the other cereals that are already out there.

If I had an opportunity, I would likely consider buying this product again. However, it’s not a cereal I would drive out of my way to buy or automatically choose over the dozens of other cereals on the same shelf.

Was there a peanut scent, taste or texture to any of what looks like crouton-sized pieces?

I've had similar cereal here and quite enjoyed it. I guess it was better than the original or something ;-) 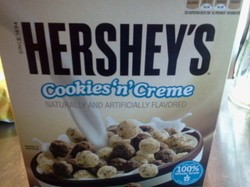 I purchased this product this past weekend and had it for lunch. Read to find out if I got my money's worth.
75%  1   12 StevenHelmer
Other Food & Cooking