I purchased this frozen dinner a couple days ago for $1. Read to find out what I thought of it.

Product Description: Frozen chicken and rice dinner from the Michelina's brand with rice, vegetables and pieces of white-meat chicken. I purchased this frozen dinner from one of our local grocery stores earlier this week after finding it on sale for $1 and prepared it in my microwave for lunch yesterday afternoon. 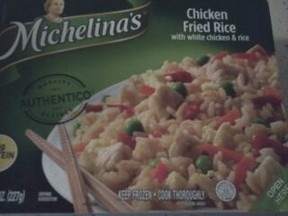 As I mentioned in another review, I don't purchase frozen dinners for myself very often. However, I recently found Michelina's dinners on sale at one of our local grocery stores for $1 and decided to stock up. As a result of this, when I was searching for something for lunch yesterday afternoon, I ended up deciding to have one of these and, after some decision making, chose the Michelina's Chicken and Rice Dinner.

I was looking forward to this product when I made it in the microwave because chicken and rice is one of my favorite dishes whenever we go to the Chinese buffet. However, after having it, my opinion of it ended up being a bit mixed.

There were a couple things I did like about this product. The first was the quantity of meat inside the package. I wasn't really expecting that from a frozen dinner, especially one that was so affordable. But, there were quite a few chunks of chicken meat inside of the box, definitely more than I was expecting to see.

Mostly as a result of the extra meat, this meal was much more filling than expected. I figured, much like the lasagna dinner I had before, I would end up needing something else to eat. However, the frozen dinner was more than enough for a satisfying lunch and even kept me full until it was time for supper.

Unfortunately,when it came to taste, this product left a lot to be desired. It, admittedly, wasn't the worst tasting frozen dinner I've ever had. But, the rice did have a bit of a funky taste to it. I'm not exactly sure what the problem was. However, I'm relatively confident it was the result of some seasoning combinations that just didn't work well together. In other words, it wasn't anywhere near as good as what I would get when at a restaurant.

When the lower cost is taken into consideration, I do think this product gave me my money's worth. However, while there were things I did like about this particular frozen dinner, I wasn't overly impressed with the way it was seasoned and I'm not sure if it is a product I would purchase again as a result of that.

StevenHelmer, Thank you for product lines, pretty pictures and practical information.
The packaging certainly appears photogenically appealing. It's disappointing that quality didn't back up preparation, price and quantity.

What kind of seasonings and vegetables were in the mix? 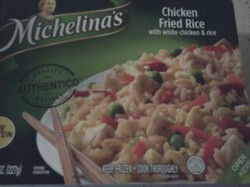