My wife and I purchased this at Costco for a little less than $10. Read to find out what I thought of it.

Product Description: Organic pizza starter kit from the Molinaro's brand consisting of four stone-baked crusts and four sauce packets. My wife and I purchased this while shopping at Costco for a little under $10 and ended up using two of the crusts/sauce packets when we made a family pizza dinner last night.

One thing my wife and I have learned from our periodic shopping trips to Costco is it is very difficult to stick to our shopping list. This is because we often find products at that store we can't find at any of our local stores.This includes the Molinaro's Organic Pizza Starter Kit we found during our last shopping trip.

Normally, this is something I probably wouldn't have considered. However, I thought the price (a little less than $10) was more than reasonable and, if nothing else, I figured we could make our own pizzas for about what it would cost us to buy a couple decent frozen ones at the store. We ended up doing just that last night and the starter kit more than met our expectations.

Using this starter kit was pretty easy. There weren't a bunch of complicated instructions (as is often the case with products like this) and my wife (who ended up being the one in charge of making them) was able to prepare the pizzas relatively quickly. She basically just had to add the sauce and the toppings of our choice then bake the pizzas on our pizza oven.

As far as quality goes, I had no complaints. While I wouldn't describe this crust as being thick, it wasn't paper thin like so many other pre-made crusts we've purchased in the past. This was important because it allowed us to add quite a few toppings (mostly the cheese, mushrooms and vegetables we already had in our fridge) and still be able to pick up a slice without it folding over from the weight.

One thing that also surprised me about this crust was the way it ended up being somewhat crispy. This isn't usually the case with products like this and, again, it was something we did enjoy.

The pizza sauce that comes in the kit was, admittedly, a little on the bland side and, in the future, I think we will have to consider doctoring it up a little bit with our own spices. However, while not quite as flavorful as we would prefer, I didn't think it was terrible. In other words, it wasn't the worst pizza sauce I've ever had either. And, considering it came with the already inexpensive kit, I was OK with it.

This product definitely exceeded my expectations and I was really glad we spent the money to purchase it. And, the best part is we still have two pizza crusts to go. If you have an opportunity to buy this product, I recommend it.

StevenHelmer, Thank you for product lines, pretty pictures and practical information.
It's interesting to learn about a fine product such as this. It sounds like a fun activity for a Friday dinner and movie night, with a competition among hosts and guests for making the quickest, tastiest pizza.

What would you do to make the sauce less bland?

I purchased this frozen pizza a couple weeks ago and had it for dinner last n... 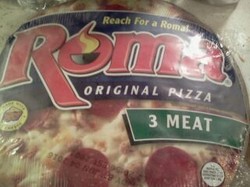 I purchased this frozen pizza a couple weeks ago and had it for dinner last night. Was it worth my money?
51%  1   7 StevenHelmer
Other Food & Cooking