I purchased this frozen pizza last night because it was on sale. Read to find out what I thought of it.

Product Description: "All natural" frozen pizza from the Mystic brand with sausage, mushrooms, uncured pepperoni, green peppers, red peppers and onions. I ended up purchasing this pizza yesterday evening while doing some shopping at one of our local grocery stores for $5. I prepared it for dinner that night.

We had originally planned on driving to Columbus, WI yesterday evening to see the Canadian Pacific holiday train. However, as the temperatures dropped and we realized we would have to find a place to park, walk to the train and stand outside with the crowd, we quickly became less enthused and ultimately just wound up staying home and watching a movie.

Since we didn't have any real dinner plans (as a result of our canceled plans), I decided to just swing by the store and pick up a frozen pizza for dinner. After some consideration, I wound up picking out this one.

I had seen this particular pizza at the store before but, since I primarily shop on price, it was left in the freezer. However, when I was at the store yesterday evening, I discovered it was on sale for $5. Since I thought that was more than reasonable, I decided to give it a try.

After trying it, I have to say I thought it was perfectly average, which is neither a compliment nor an insult. There was nothing that was necessarily wrong with the pizza. It just didn't seem like it was anything overly special.

One thing positive I can say about this pizza is I did think it had a decent amount of toppings on it, at least when compared to other frozen pizza brands. I also did find I liked the crust because, at minimum, it wasn't thin/floppy like some other pizzas.

But, even with those two things, there wasn't really anything I would describe as memorable about this pizza. It might have been all natural, but it was also still a frozen pizza and it tasted similar to dozens of other pizzas I've had. In other words, if it weren't for the lowered price, I don't think there was anything about this pizza that would have me going out of my way to choose this one over another pizza brand.

As I said, it's an OK frozen pizza choice but there isn't anything that is overly special about it. If you happen to find it on sale, it's worth buying. However, if it is the same price as every other pizza, you wouldn't be missing much if you went with a different choice.

It's hard to find good frozen pizza, but I personally like the Ristorante ones from Dr. Oetker. 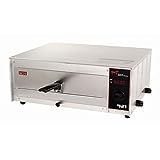