I ended up using this last night when I made dinner. Read to find out if it was worth the money my wife spent on it.

Product Description: Jarred Alfredo sauce from the Priano brand. My wife picked this up while out grocery shopping at our local Aldi grocery store a couple weeks ago for around $2 and, after discovering it in our pantry last night; I heated it up in the microwave and used it with the tortellini dinner I prepared for my family. One jar had roughly enough for about 6 or 7 servings. 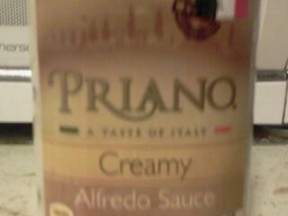 When I decided to make tortellini for dinner last night, it was primarily for my youngest daughter. And, since she doesn’t normally have any sort of sauce on her pasta (she just prefers butter and Parmesan cheese), I never even thought to purchase a jar when I was at the store. Fortunately, when I got home yesterday evening, I was able to find a jar of Priano Alfredo sauce in our pantry.

When my wife purchased this, it was primarily because of the price. It was less expensive than many other brands (though I have found some store brands that were cheaper) and she figured it would come in handy in a situation much like mine yesterday.

Since it was a bargain brand, I did have some concerns about it and wondered if it would be a sauce I would have to find a way to doctor up in order to make it enjoyable. However, as it turns out, it was actually pretty decent.

One thing I noticed right away about this product was how thick it was. This is normally an issue with bargain brands and, in the past, I have had some that were almost water-like in thickness. That was not a problem with this particular Alfredo sauce and, while there are some better-known brands out there that definitely beat it in that category, I would give the overall thickness of this product a passing grade.

The sauce didn’t taste too terrible. However, I did think it was a little bit on the bland side when compared to other Alfredo sauces we’ve purchased. I could taste some seasonings in it, but they were very faint and probably could have been kicked up a notch or two. But, given the price, I do think the Alfredo sauce still managed to exceed expectations.

This is an OK bargain brand of Alfredo sauce. It isn’t the best I’ve ever purchased. However, it is more than acceptable given the lower price. I would recommend it if you are shopping for something like this and are on a tight budget.

I stopped buying the Priano brand because of the sodium content, they are way too salty for us. 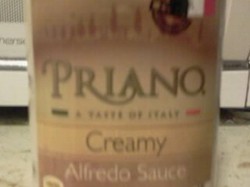