I purchased a package of these wings yesterday and had them for dinner last night. Read to find out what we thought of them.

Product Description: Raw, unseasoned chicken wings from the Rio Star Foods brand. I found a frozen bag of these chicken wings on sale for $5.99 at one of our local grocery stores while out shopping yesterday morning, purchased it and prepared the wings in my crock pot as part of our family dinner last night. 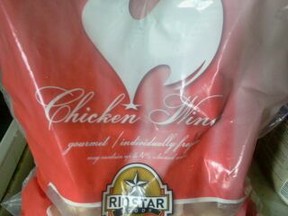 Since we didn't have many food options in our house, I decided to stop at the grocery store yesterday morning before work and look for something to have for dinner last night. After some debate, I decided on chicken.

My original plan was to just buy some budget chicken drumsticks like I normally do. But, shortly after putting those in my cart, I noticed the store also had chicken wings from the Rio Star Foods brand. These were $3 less than the drumsticks I picked up, looked to have just as much meat on them and I figured it would be something everyone would enjoy so I bought a bag.

Because of time constraints (my wife and I both had to work yesterday and I didn't want to eat super late), I opted to cook these in my crock pot. This, as it turns out, was not the best choice because the chicken wings came out a little mushy with the meat falling off of them and, as a result of that, is not something I would recommend. However, despite that mistake, I do think this proved to be a good decision.

One thing that really surprised me about this product (which contained both wings and legs) was the quantity of meat on the chicken. I've purchased plenty of other chicken wings in the past, usually top brands that were already pre-seasoned, and they were nothing but skin and bone. This chicken had quite a bit of meat on it and definitely was filling as a result.

The chicken also seemed to have high quality. It had a good smell to it while it was cooking (something that is not always the case) and, even though this was a frozen brand, tasted as fresh as the fresh chicken we normally buy. I opted not to do anything overly special with it, but my wife and I both thought this was a product we would be comfortable eating plain or cooking in barbecue sauce or breading and we all enjoyed it so much, there wasn't much left when we were done.

Again, I wouldn't recommend making these wings in the crock pot. But, if you're looking for something that would work for frying, baking or grilling with or without special seasonings and sauce, this is a product I would recommend looking for. In fact, I plan on returning to the store later today to buy some more bags.

StevenHelmer, Thank you for picture, practicalities and product.
Since March 2020, there have been mark-downs in the frozen-food sections of the grocery stores where I shop. It's helpful reading this and your other reviews of frozen-food products so I'll know which sale prices to take advantage of. What with double fuel points through the month's end, it means a win-win situation of paying less for a product but receiving fuel-point reductions as if I'd paid full price.