My wife purchased this product a few days ago for $3.50. Read to find out what I thought of it.

Product Description: Frozen pizza from the Specialty Selected brand. My wife purchased a pizza with mozzarella, cherry tomatoes and arugula a few days ago for $3.50 from our local Aldi grocery store while out shopping. We ended up making this pizza for lunch this past weekend, cooking it on our pizza oven and dividing it between the two of us. 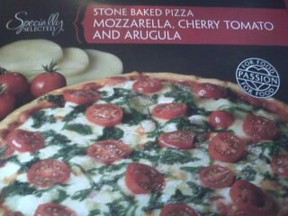 To be perfectly honest with you, when I first saw my wife had purchased this pizza, I did have quite a few doubts about it. This is mostly because, from the box at least, it looked like it had a thin crust and there wasn't much in terms of toppings on it. And, from experience, I've also learned the photo on the box is normally quite a bit better in appearance than what is actually in the package.

However, we did decide to make this pizza for lunch this past weekend. And, when we did, it immediately exceeded my expectations.

One of the first things I found I liked about this particular pizza was the crust. As I mentioned, the box made it look like a thin-crust pizza, something I'm normally not a huge fan of. However, the crust was actually thicker than expected and, that alone, made the pizza better than expected.

What really impressed me though had to be the toppings. There was actually quite a bit of tomatoes and arugula on the pizza, at least as much as the box indicated (and that truth in advertising will always score some points with me). However, the thing that surprised me had to be the cheese. Rather than just shredded cheese, like many other brands, this pizza also had cheese slices on it. This isn't something I see very often and, as someone who likes cheese, was very pleased with it.

The sauce on the pizza was also pretty decent. It had a good blend of seasonings in it and wasn't overly spicy. In fact, had my kids eaten this (they aren't a fan of pizza with any sort of topping on it so we let them have something else), I think they would have enjoyed the sauce too. And, they aren't big fans of tomato sauce.

When I first took this pizza out of the box, I thought it was a little on the small side. However, it did manage to be more filling than expected and, at least as a light lunch for two people, definitely hit the spot and I would describe it as being worth the money as a result of that. 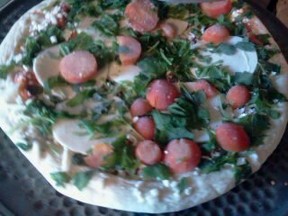 When I first saw this pizza and saw the smaller size, I wasn't sure if it was worth the $3.50 my wife spent on it. However, the toppings and overall quality of this pizza did make it worth that price tag and it is a brand of pizza I would recommend as a result.

Review of Orv's Tasty Toppings Pizza
I purchased these pizzas and had them for lunch and dinner over the weekend. Were they worth my money?

Brew Pub Lotzza Motzza 4-Meat Pizza Review
A review of the frozen mozzarella and 4-meat pizza I purchased this past weekend at one of our local grocery stores.

Review of Bellatoria Sunday Brunch Sausage n' Gravy Pizza
My wife purchased this product last week and we had it for breakfast the next morning. Read to find out what I thought of it.
Updated: 07/11/2017, StevenHelmer
Thank you! Would you like to post a comment now?
5

StevenHelmer, Thank you for product lines, pretty pictures and practical information.
That's quite classy, quite impressive for a frozen pizza to have not only shredded but also sliced cheeses.

What were the cheeses that made such a difference (along with preparation, price, quality and quantity)? 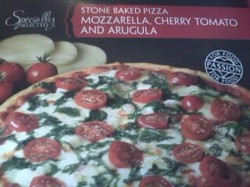