My wife picked this up for me earlier this week. Read to find out what I thought of it.

Product Description: Frozen, single-serving, lasagna dinner containing pepperoni, Italian sausage, ground beef, pork and pasta in a tomato sauce. I had my wife pick this up for me earlier this week and had it, as a dinner-for-one, on Monday night, preparing the lasagna dinner in my microwave as per the instructions on the box.

Things got a little hectic Monday and, because of that, I realized I forgot to pick up something for dinner. Since the girls had ice skating and my wife and I had both cars (I came from work, she brought the kids from home), I asked her to stop by the store on her way home and pick up some frozen dinners for everyone. She did this and purchased a Stouffer's Meat Lovers Lasagna for me.

I have had this product in the past but, when I saw she purchased it, couldn't remember that much about it. In fact, I'm still not sure I liked this lasagna the first time I had it. However, after trying it again on Monday night, I will say, while it was OK, it wasn't quite as good as I was hoping it would be.

As is usually the case, I was the last one to get his dinner on Monday, electing to let the kids eat and put them to bed first. When I did finally get around to making this, I did so using the microwave instructions.

As far as convenience goes, I had no real complaints about the lasagna. The microwave steps were easy to follow and, even though it did take longer to make this than the other frozen dinners my wife purchased, it wasn't anything that was too long. In fact, the longer cook time actually proved to be somewhat convenient because it allowed me to put my youngest daughter to bed while the microwave was still going.

The lasagna also had a decent taste to it. When I first made it, I was a little concerned it would be really spicy (something I usually try to avoid before bed). But, even though it had a bold sauce and a noticeable blend of seasonings, it wasn't as spicy as I was expecting. And, as is usually the case with frozen dinners from this brand, it proved to be filling too.

My biggest complaint about this lasagna is, even though it claimed to be a "meat lovers" lasagna, I really didn't notice anything that would make me think that. Yes, I did come across some of the sausage and pepperoni that was promised on the box. But, those were in somewhat small portions. In fact, had I not seen the box, I probably wouldn't have been able to tell the difference between this lasagna and Stouffer's regular lasagna product. In other words, while it wasn't bad, I didn't feel like I was getting what was advertised.

As I said, this wasn't a bad choice for dinner on Monday. However, I also didn't think there was anything overly special about it. If I had a choice between this one and Stouffer's regular lasagna, I wouldn't hesitate to pick the latter if it meant saving a few cents and would not recommend this product if it means spending more.

StevenHelmer, Thank you for product lines, pretty pictures and practical information.
Frozen lasagna appeals to me -- for my guests who prefer frozen, not for me, since I eat fresh -- when preparation, price and quality are in agreement. It's disappointing that such doesn't seem to be the case regarding the latter.

Would it have helped to have had the product as just pepperoni or just sausage? Or would meat lovers necessarily involve two or more meats instead of more of one meat? 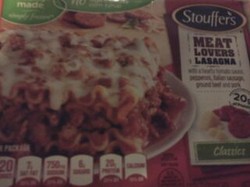 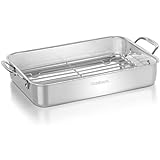 A review of the frozen one-serving lasagna dinner available at Aldi for 99 cents.
73%  1   12 StevenHelmer
Other Food & Cooking