We picked up one of these after seeing an article on Facebook. Read to find out what we thought about it.

Product Description: Frozen pizza from the Tombstone pizza brand featuring sliced bratwurst with green peppers, onions, Wisconsin cheddar and mozzarella cheese and a tomato sauce with a hint of brown mustard in it. My wife purchased one of these pizzas yesterday morning at one of our local grocery stores and we ended up baking it on our pizza oven last night so we could have it for dinner. 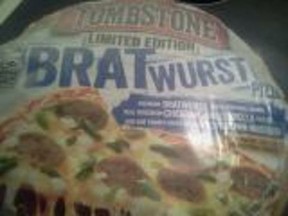 I don’t normally order pizzas from the Tombstone brand very often because they tend to be a bit more expensive than I prefer to pay for frozen pizza and we usually only purchase this brand when one of our local stores has it on sale. However, I saw this particular pizza in an article on Facebook a few days ago and, after seeing it and realizing it was only going to be available for a limited time, wanted to try it. That’s why my wife purchased it yesterday while picking up some other things at the grocery store. And, unfortunately, it wasn’t as good as I was expecting it to be.

I’ll start out by saying the overall concept is a good one. Being from Wisconsin, I love bratwurst (we have them every couple of weeks) and, as far as I can remember, I have never seen a pizza company try to use them as a topping before. I also liked the fact Tombstone also combined the bratwurst slices with green peppers and onion, two things we tend to add to the bratwurst when we make them.

I also have to say the pizza was much more filling than expected. Normally, my wife and I can eat one of these pizzas in a sitting. We had leftovers last night, partly because the crust was thicker than expected (something we loved) and there were actually quite a few toppings on the pizza, definitely more than we were expecting from a frozen brand.

The main problem with this pizza is the overall taste really wasn’t what I was expecting it to be. The bratwurst slices were very thin (similar to the thickness of pepperoni) and, because of that, I honestly couldn’t taste much flavor from them when combined with the rest of the pizza. The cheese and sauce simply drowned it out.

I also found I wasn’t crazy about the sauce. I’m not exactly sure, but I think Tombstone was trying to make the tomato sauce taste a bit like ketchup and mustard. While that is a good combination for bratwurst in general, it just didn’t work for me as a pizza sauce and I was a little bit disappointed by that.

I like the concept but this would have been better if the bratwurst slices were a little thicker so they could compete with the other pizza flavors and Tombstone used a more traditional sauce. I know this is a limited edition attempt, but it is something I do hope the company chooses to improve upon a bit and keep in freezers.

I would have never imagined such a combo on a pizza: the bratwurst and the accompanying sauce that you mention.

Thanks for the review of this pizza, I saw it & was going to try it, now I won't waste my money, thanks again 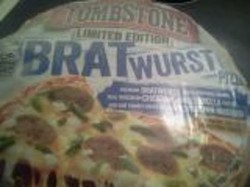 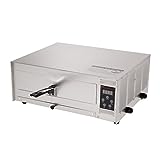