I decided to purchase this product yesterday and had it with dinner. Read to find out what I thought of it.

Product Description: Heat-and-serve red beans and rice from the Zatarain's brand that is prepared by placing the rice, package and all, in the microwave for about 90 seconds. I purchased this product at one of our local grocery stores yesterday morning for $2.49 and prepared it as part of a pork chop dinner I made for the family last night. 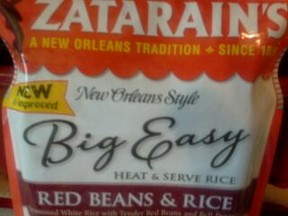 Even though the weather was being a bit weird yesterday and I couldn't tell if we were going to get rain or if the sun was going to stay out, I decided I wanted to make some pork chops on the grill. As a result of this, while I was at the store picking up some other items, I looked for a side dish to go with the meat. And, after some debate, picked up a package of Zatarain's New Orleans Style Big Easy Red Beans & Rice.

This is a product I've seen several times before and had always been tempted to try it. However, it was also always a bit pricey when compared to other, comparable, products and, because of that, I usually wound up picking out something else instead. In fact, the only reason I purchased this yesterday was it was on sale and the sale price was only about 20 cents more than the rice product I had been considering. As it turns out, it was a good decision.

One of my concerns about this product when I bought it was how spicy it was going to be. I like spicy foods. But, my stomach really doesn't and, because of that, I do have to be somewhat careful. However, as it turns out, that wasn't a problem with this product, the rice had a good blend of Cajun seasonings in it that gave it a good flavor without it being too strong or spicy.

Another thing I liked about this product was the quantity of beans in it. I've seen similar products that promise some sort of meat or vegetable mixed in with the rice and not have much in terms of quantity. That was definitely not the case with this brand and the mix of beans helped to make the rice dish much more enjoyable than it might otherwise have been.

I think my only real complaint about this product had to be the overall quantity in the package. I had hoped, with the beans, there would be enough to go around. But, as it turns out, one package was barely enough for one adult and, by the time we divided it up, there simply was not enough. As a result of this, if I were to buy this product again, I would definitely purchase at least two packages.

The overall quantity left a little something to be desired. However, the red beans & rice surpassed my expectations in every other category. Again, this product was a bit more expensive than the other, similar, choices on the store shelves. But, after trying this, I do feel I could justify paying the extra money.

I would recommend one pack per adult.

Thanks for the review! I've often seen it on the shelf too, and never purchased it. Now I will add it to my shopping list (at least 2 packs!) I purchased a package of this soup mix to have with dinner last night. Read to find out why I don't recommend it.
75%  1   14 StevenHelmer
Other Food & Cooking