Rubber Ducky has been one of the Bard of Ely's most successful songs although it is one that he never liked. It is in a book, been used on TV and released as an album track.

My song Rubber Ducky began life in around 1971, back in my hippie days. I was with a friend called Paul and had been smoking some very strong Durban Poison and I suddenly said: “Paul, you know, I just thought, you could extract latex from a rubber ducky, and I’m going to write a song about it.”
It was inspired in part because my friend had a habit of saying "Rubber Ducky" to himself. I kept the crazy idea in my head and when I got home scribbled down the lyrics on a piece of paper. The first lines were:”Extracting the latex from a Rubber Ducky, gets you in a mess, yes, very mucky, we’ll give you all a try if you’re very lucky, at extracting the latex from a Rubber Ducky.”

In those days I used to play at the Heresy Folk Club in Chapter Arts Centre in Cardiff, and having put a simple tune and a couple of chords to my words, I decided to try it out on the regulars down there. Amazingly it went down a storm and in weeks ahead I started experimenting with various versions of the same song. There was the Rubber Ducky Blues and the Rubber Ducky Rock, for example. I used to be backed by a young guitarist called Simon, who was brilliant and could instantly adapt the tune to a new genre. I soon had a cult following for my performance.

The fact of the matter was though, that I actually hated the song. It was inane, contrived and stupid. It was everything I didn’t want to be known for as a performer. I wanted to be another Bob Dylan, Neil Young or Cat Stevens and my heroes would never be caught playing nonsense like this. However, it was what the people wanted and I was stuck with it.

Later that year I was at the Windsor Pop Festival and after Hawkwind had finished their set I managed to hassle a stage manager to let me and a few friends do a couple of songs while they were changing the stage over. By then the song had a kazoo thrown in as additional instrumentation and a real rubber toy duck that someone could squeak.

So there I was with a beat-up guitar and a couple of friends blowing a plastic kazoo and squeaking a real Rubber Ducky and the audience went wild about it. “More, more,” they shouted. I saw the thousands of hippies out there all applauding my song, and it was a great moment in many ways but at the same time my heart sunk. This was not how I wanted to get known as a rock star.

At the Rainbow Theatre, London

Moving forward in time and I was in London to see Van Morrison in concert at the Rainbow Theatre in Finsbury Park. I had called in a pub at the end of a terraced street for a beer before I went to the venue where Van was playing. No sooner had I entered the place than some guy came up to me and said: "Oh, wow, you're that guy from Wales that does the song about a rubber duck! I have been telling all my mates about you so you must come over and meet them all!"

It was true. My 10 minutes of fame at Windsor Festival had created this. Of course, I should have been delighted and realised that  I should capitalise on this popularity my song obviously had, but I was young and idealistic and so it actually depressed me. If only I could have had that opportunity again!

The years went by and it was now the '90s and I was once again trying to get somewhere in the music business. I had re-evaluated my thoughts about what a songwriter and performer's role should be. I had realised that if the public likes what you do then that is success even if you yourself are not happy with some of your own work that others enjoy. It is all part of the show. It is all an act and an entertainment after all.

I had been talking about my past to my good friend C.J. Stone and at the time he had a column in The Guardian newspaper in which he wrote about my crazy experience at the Windsor Pop Festival and my song Rubber Ducky.

C.J. also wrote about it all again in his book The Last of the Hippies, published by Faber and Faber.

With my new opinion of my song having value after all, as a popular song and a performance others could appreciate, I got together with a bunch of Cardiff musicians and recorded the song.

It ended up on Take It To The Bridge Vol 3, which was a Various Artists compilation album selected by my friend the radio presenter and college lecturer Steve Johnson and released on Bridge Records. From there it got chosen to be used as part of the soundtrack for a Welsh drama entitled Y Ty (The House). So it has had quite a fair share of media attention over the years.

Now let's get started on extracting that latex!

Last of the Hippies by C.J. Stone

Rubber Ducky on the Internet

Rubber Ducky has had plenty of media coverage

• Bard Of Ely The Man The Musician The Hubber

No, not all because a former girlfriend from all those years back bought me that record as a bit of a joke!

At first I thought you were talking about Ernie's Rubber Ducky song from Sesame Street. I hope that doesn't make you like your own song even less.
By the way, I like your green hair.

Free Pop and Rock festivals were very much part of the early 1970s and some h... 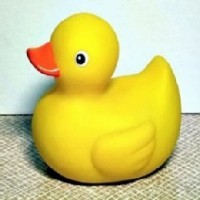 Free Pop and Rock festivals were very much part of the early 1970s and some had very notable line-ups. There were those you needed a ticket for too like the Isle of Wight festivals
13%  0   2 BardofEly
Pop Stars

Marc Bolan was famous for fronting the glam-rock band T Rex and for being the singer-songwriter for Tyrannosaurus Tex the act that became T Rex. Unicorn was one of his best albums.
Loading ...
Error!