Scooby Doo is very popular with both young and old. Here you will find everything you need for a Scooby Doo Bedroom Theme.

Scooby Doo- Where Are You?

When I was small, we used to look at Scooby Doo on Saturday mornings. It was so exciting, sometimes scary, and we could all howl like Scooby. Knowing that all would be well in the end did not lessen the tension. Today, my kids are watching Scooby Doo and they love it! For an almost 50-year old dog, that's not bad at all. To be honest, I still watch it with them sometimes...

Here you will find different stuff for decorating your child's bed-room. It does not take much to make a kid happy and going to bed with Scooby Doo sheets is fun. This will make for a great gift to your kids.

If you don't like making too many changes in the bed-room, or if the kids are sharing room, just put up these wall stickers. They are really easy to use and give a great "feel" of Scooby Doo. It is possible to take them down and use them some-where else, and there is no sticky residue left afterward.

Why not make a "Scooby-Corner", using these stickers and putting a few cushions on the floor. A safe place to hide from all the monsters! The van has the measurments 31" wide x 34" high, and Scooby Doo is 37" high- almost real!

Removable- you can use them again

Scooby Doo is a popular dog from the TV series with the same name, who has been around since 1969. He can talk, and his best buddy is Shaggy. Although both of them are scared of everything, and prefer running the opposite direction when something happens, they manage to solve a lot of mysteries together with their friends.

It is always exciting to guess who is inside the monster costume. Afterwards they get their reward- an enormous plate of food! The other characters; Fred, Daphne and Velma are more courageous and smart, but Scooby Doo is still central in finding the monsters.While Scooby Doo is most known as a cartoon, it has even been filmed with real actors. Most people still prefer the cartoon version.

Cartoon Network
Here you can play games, watch videos and talk to other Scooby fans

Kids love decorating their room with their favourite cartoon figures. They live in their little world of fantasy, and these things will help them in their play. Often, they know the stories by heart and just like acting them out.

There are many films, figures and games with Scooby Doo and his friends. For a collection of other Scooby Doo toys and games, have a look here: SCOOBY DOO

Do you like Scooby Doo? Who is your favourite character?

I think a Scooby Doo bedroom would be adorable! I like Scooby. 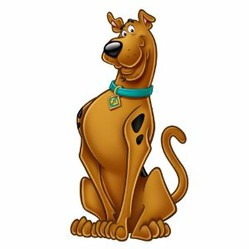 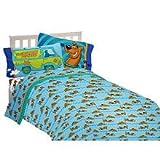