10 Versions of Sleeping Beauty: What Changed through Centuries?

There are hundreds if not thousands known versions of The Sleeping Beauty. Can we learn something about the position of women through centuries from them?

The Sleeping Beauty is a famous fairy tale known in numerous versions. It's also an example of a fairy tale which entered oral tradition from written works, not vice versa, what should be the case for all fairy tales in generally accepted theory. While we could use The Sleeping Beauty to challenge this theory, we'll rather try to find how this story reflected the position of women through centuries.

So here are 10 versions of The Sleeping Beauty from the 1200s to today:

This is a German epic where we meet Brunhilde. She is a Valkyrie, a warrior maiden who is disobedient and punished by the supreme god Odin. She falls in everlasting sleep and is surrounded by flames which protect her from possible attacks or the rescue. But Sigurd crosses the fire and wakes her. Unfortunately, this is not enough for a happy ending. Another woman and Sigurd's brother enter what ultimately leads to the death of Sigurd. In some versions, she dies too, but in others not.

Anyway, she is a very powerful female character. Some people believe she is based on real Princess Brunhilda of Austrasia (543-613).

In this story, we have a Zellandine, a beautiful princess of Zeeland. At her birth, three goddesses were invited. One of them was unsatisfied with a knife given her at the meal, so cursed the princess to fall asleep when she touches flax.

When this happened many years later, a knight comes by, is magically (helped by other goddesses) transported to the tower where she sleeps and is unable to resist her beauty. He sleeps with her and nine months later she gives a birth to a boy who sucks the piece of flax out of her finger so she can finally wake up.

Zellandine is not so strong as Brunhilde, but we have two powerful goddesses and a weak knight who can't control himself. While we can look at Zellandine as a victim, we still can't deny the power of women.

In this tale astrologers (men) predicted that Talia could be in great danger if she comes in contact with flax.

The king bans flax in his home, but Talia as a young woman meets a spinner and inevitable event happens.

Her father believes she is dead and leaves her in an empty castle where sometime later another king comes by. He finds Talia, can't resist the temptation and gets in her bed.

In next weeks he visits her a lot and later she gives a birth to two kids.

Talia awakens when her baby boy sucks a splinter of flax out of her finger, but the main problem is his wife who finds about kings mistress and illegitimate children. She orders to send them to court and tries to serve them to their own father. But Talia who gets into trouble as well is smart enough to get the king's attention soon enough and the jealous wife is punished.

All in all, we have one king, incapable to protect his kid (Talia), another king, who puts his mistress and children into danger (by talking in sleep) and two powerful ladies who use men around them to get what they want.

The wife of Bath is one of the most famous stories from Canterbury Tales. It starts with a knight who took advantage of a young maiden. He could face the death penalty for that, but Queen Guinevere gave him a chance to save his life. She sends him on a quest. He must find out what women seek most of all. He has a year to return with an answer and just before the time runs out he meets an old lady who helps him, but her help has its price.

While we won't ruin the joy of reading The wife of Bath to the visitors of this article, we can still summarize the roles of the characters according to their genders.

We have one (young) woman as a victim and two (older) women in the position of knowledge and power. We also have one man who is stronger than all of them yet just a toy in their hands.

5. Sleeping Beauty in the Wood

Charles Perrault wrote a Sleeping Beauty in the Wood as one of his fairy tales which are now considered as a definition of the literary genre. It has a well-known plot with fairies giving the little princess all kinds of gifts until the evil fairy cursed her to die when she pricks herself with a spindle. This curse can be only changed in a very long sleep which will last until Mr. Right finds her.

In Perrault's version, the story doesn't end with a marriage. It actually becomes only more interesting. We find the prince is a son of a man-eating ogress who later tries to eat his wife and both kids. She eventually dies, but we still note how powerful are women and how weak are men.

We have a king incapable to protect his only child, a prince who has a lot of trouble protecting his wife and kids, and a cook, who is forced to cook the princess and children looks the most resourceful of all. On the other hand have fairies who play with a destiny of mortals, a powerful ogress and even a princess needs to find a trick or two to inform her husband about the cruel intentions of her mother-in-law.

The Sleeping Beauty by Jacob and Wilhelm Grimm is definitely the most known written version. It ends with a kiss, so the whole second part is erased. If we try to focus only on the main characters we can find an incompetent king, dozens of unsuccessful suitors and at the end a prince who just happened to be in the right place at the right time.

The princess is even less interesting than him, but we still have at least three powerful women in the story: two fairies fighting each other and a spinner.

While the date of first publishing may go way to 9th century making it the eldest known version of The Sleeping Beauty, Western world became familiar with this tale only from (wrongly inserted ) the collection of 1001 Arabian Nights in 19th Century.

This fairy tale from The Book of the Thousand Nights and One Night (translation of Contes Arabes Modernes by Guillaume Spitta-Bey) focus on the relation between the girl (named Sittukhan) who was not a princess yet from very rich family and the prince who would like to be with her but it seems he doesn't be with her in public. So she puts him in a test. In the end, she believes he is good enough to become her husband.

Again, we have several powerful women (Sittukhan, her mother, flax mistress, a wise old lady who helps sultan's son, his entrepreneurial mother) on one and weak prince, several doctors incapable to find a diagnose for his disease on the other side.

8. How a Beauty was Waked and Her Suitor was Suited

This humorous version of The Sleeping Beauty by Guy Wetmore Carryl is almost forgotten today, but it should not be, because it addresses several very current affairs. We only meet two characters really, but they are both witty enough to deserve their parts in the story. In my opinion, they are both strong and the tale ends with a promise for a very interesting marriage.

Disney version is undoubtedly the most popular variation of Sleeping Beauty ever. It can be accused of some stereotypes, yet we can't deny the power of several female characters in it. Yes, the kiss was non-consensual, but life is not always 100% politically correct, right?

Again, we are dealing with several powerful women who are fighting each other and trying to improve their position in society. They are stereotypical, but far from being only pawns on the board of life.

10. Modern versions of The Sleeping Beauty

It really doesn't matter if we are talking about Academy Award Winning Pedro Almodovar's Talk to Her or artistic Jane Campion's Sleeping Beauty or Vadim Glowna's, it is always about male fantasies, their wish for power over (sleeping) women, but the real power is in majority cases at women. They set the rules, they control the game and they stay in charge even in their sleep.

We have thousands of versions of The Sleeping Beauty, yet nothing really changed in the last fifteen centuries.

Or do you have different opinion?

Hi, DerdriuMarriner, thanks for stopping by and pointing out the lack of Sleeping Beauties in Africa and Asia. I actually included The Ninth Captain's Tale which is from Egypt, but it looks it comes from the same basin of stories like the majority (French, Italian, English) of other versions before Disney transformed them into blockbusters. My favorite is undoubtedly Sun, Moon and Talia, where we have several interesting characters and a lot of drama. And what is your favorite?

Tolovaj, Which version do you prefer? Is it that Africa and Asia lack Sleeping Beauty stories or that their versions just are not emphasized?

I am glad you found some interesting info, WriterArtist. More I know about the fairy tails, more I understand about the world and about myself too.

I did not know there were so many versions of sleeping beauty. Each one tells a fascinating tale and hopefully there is a morale in the story. I would add that they definitely aligned with the fate of women in those days.

This fairy tale, also known as The wolf and the seven little goats or lambs o...

Do you wonder about meanings and symbols in fairy tales? Classic stories like... 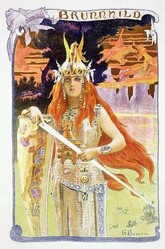 This fairy tale, also known as The wolf and the seven little goats or lambs or kids, is one of the most well-known fairy tales by brothers Grimm.
84%  10   5 Tolovaj
Fairy Folklore

Do you wonder about meanings and symbols in fairy tales? Classic stories like Bluebeard are loaded with them and here is a selection of some popular ones.
Loading ...
Error!