Augustin Lesage was French spiritual artist. He claimed his hands were instruments of spirits, or ghosts from other dimension.

Augustin Lesage was a miner from town St. Pierre Les Auchel, France. Every single day after hard work in underground mine, Lesage used to return home and paint all night. Previously he would spend twelve hours of hard mine extracting job. Strong exhaustion that would follow this kind of life, was surprisingly vanishing when he would start painting.

Augustin Lesage: from Miner to Painter

This French spiritualist was born on August 19, 1876 in little town St. Pierre les Auchel in French mining area of Pas de Calais. Lesage has found his first job in local mine when he was 14 years old.  He didn't plan to work in mine for long. His main goal was to earn some money and travel away,

When he was eighteen he met a girl, and they got married. When he was nineteen he became father, and the Augustin Lesage made decision to stop working in mine to be with his family. After returning from the military service, he needed more money for the family. This made him return to his previous job of miner.

One day on work, deep under the surface he heard a voice telling him: "One day you will become a painter". Every man, sane enough, would stop here and think: "Hey, this one was for psychiatry, and not the mine". To be honest I had the same thought when I heard about him for the first time. And then I saw his paintings. Wow, that is a story to be told, I thought!

"One day you will become a painter"! After hearing this at the bottom of mine, Augustin Lesage was frightened at first. But despite the fear, he truly believed someone addressed that to him. After short thinking, he decided to seek help from a medium. He took spiritual seance in hope that the spirit will talk to him again, in hope this time he can get more information.

At the time he knew nothing about painting. "Spirits" seemed to be very eager to explain to him his new call. To give him instructions, advices and any explanation he asked for. He was told that he will be in constant contact with them, "spirits", trough the technique of automatic writing. He shouldn't be afraid of his new call, no matter how strange all of this looks to him or his family, Lesage was assured.

The other thing Augustin Lesage's Painting Spirit told him was that he will become famous, and that his work will be subject to many scientific observations.

Augustin Lesage was advised which brush to use, which painting colors to buy, and he was assured his hand will be guided by them, "the spirits", and that he won't know what the painting is going to look like until it is done.

Fashion for spiritual sessions in France

At that time, people in France believed in existence of spirits, or ghosts. It was also believed those spirits are eager to talk to their living descedants, as well as with anyone who called for them.

One more reason for his unquestionable belief in this story about spirits, was that Augustin Lesage believed one of the spirits was of his sister Mary. Mary died in age of three, when he was seven years old.

Painting Spirit: Augustin Lesage Was Guided by The Spirits

Augustin Lesage, now French spiritualist,  decided to start obeying to the terms he was told by "spirits", one of which he believed was his sister Mary.

He made an order for canvas. When it was delivered to him, he was surprised it was 3 m long canvas. He expected it to be few smaller ones. Lesage took scissors in order to cut it into smaller, acceptable pieces, but his hands shivered. This time, coming from his head, "spirit's" voice told him he was going to paint on that big canvas. Lesage obeyed, and he mounted it, prepared painting materials, and started painting.

This was the moment when one of the most awkward painting attempts began.

It seems painting wasn't of any physical or mental stress for this French spiritualist. The fact he was working twelve hours long shifts in mine didn't left any side effect on his artistic work when he would return home. On the contrary, he felt doing his art was giving him new energy. He felt relaxed after he would finish painting.

The most interesting thing was the artistic process itself. His technique was different from any other existing painting techniques. He was covering this three meters high canvas from left to right, from upper to lower parts of it. He would start applying colors on left upper corner of canvas, and continued in horizontal line. Lesage was, actually painting in rows. Augustin had no sketches, no plans for his work, nothing. He would just sit down, and start working like printing machine.

One more impressive fact about Augustine Lesage's artistic work was that his paintings were perfectly symmetrical.

His work has lots of architectural and ornamental  details. Perfect symmetry held in his paintings gives them divine meaning. Augustin's paintings have central vertical line, as the vertical axis of symmetry. Everything to the right and left of that axis is in perfect balance.

In the year 1923 Lesage left his mining job and put all of his energy into finishing his spirit guided work.

When he was asked to identify spirits working trough his hands, he gave names of Leonardo da Vinci and Marie Tyana. For many years, historians didn't know who was the latter one. Later Marie Tyana was recognize as Apollonius of Tyana, a philosopher who lived in the time of Jesus from Nazareth.

Do you believe Lesage's hand was directed by spirits?

No, mind is full of undiscovered secrets.

I'm writing on both sides, because I'm undecided. I've also seen evidence of how amazing the mind can be. LeSage obviously thought that he was being possessed, but that might just have been his own brain throwing up this wonderful art.

Of course! It would be foolish to think man can come up with that!

Absolutely! In fact, I think, most of us channel without knowing that we do. We often carry too much "noise" to clearly hear the guidance that's given to us and always available when needed. Every time there is a beautiful creation, it's the work of the spirit, even though the person who created it may not be aware of it and the guidance may not be auditory as in Lesage's case.

So many people have mentioned they have no idea where their talent comes from, it is effortless and guided. I believe!

Yes most definitely, I have been guided by spirits myself in my scribes. I have also met an apparition on a road in Kentucky. I wrote about her in a poem "Graveyard of Lost Souls" you can find the link to my main website poetry at the bottom of each of my pages. There have been many voices spirits or angels who have guided people to great works of achievements. Look at Joan De Arc, she was spoken to as well. So yes I do believe strongly in other dimensions crossing over into ours. Great story, I enjoyed reading and learning about this man/miner./artist.

I've certainly hard of stranger things. I've also seen stuff come out in automatic writing years before historians found evidence of it. I'm willing to keep an open mind on this one.

He was accepted as remarkable artist during his lifetime. His paintings were quite popular during 1920s and 1930s. Despite popularity he was enjoying at the time, Lesage never claimed to be the author of his work. He was talking of himself merely as of instrument of higher forces.

Augustin Lesage died in February 21, 1954. He joined his painting spirits almost completely blind. During his lifetime he made over eight hundred paintings. This spiritual artist remained humble for whole of his life. He never sold any of his painting for more than the price of his paycheck while he was miner.

Prophecies about him becoming famous painter, and about his work being subject of scientific research came to be true.

Today Lesage is considered irrelevant artist, which is completely unfair to this spiritualist with remarkable gift. Believing or not in ghost story behind his artistic works, you have to admit Augustin Lesage deserved to be accepted as one of the greatest artists of 20th century.

Read About Other Artists from This Period:

Exactly! It is unbelievable someone could produce that perfect symmetry on the canvas of that size. His work is impressive.
I am glad you like it!

I am glad you liked the article. And I would love to see all of his work too. I have to go to Paris just to see those paintings. :)

You write a gripping account Augustine Lesage's work and life. Would love to see his work some day in person. Thanks for the inspiration.

Brenda, I am happy you liked the article. It is really hard to believe this is work of a man. Too many details, and they are perfectly symetrical. Something was going on there, that is for sure. :)
Thank you for comment!

Look at the detail in his paintings. Only a spirit guide could get me to paint all of that intricate detail. LOL Thanks for the informative article.

Yes, zteve, fantastic art indeed! Thank you for your comment. I am glad you enjoyed story about Lesage and his art!

Thank you, what a wonderful story and what wonderful paintings. Indeed truth is stranger than fiction but what fantastic art he produced!

Thank you, Kinworm! I am glad you like it!

I've never heard of Augustin Lesage so this was interesting to see his very unique and detailed paintings. A great share.

Katie, I totaly agree with you. I just thought it would be good to write an article on him. It is really not fair we know nothing about Lesage's work. And his paintings are wonderful!
Glad you liked it! 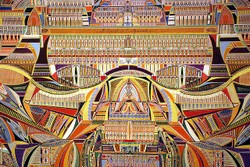 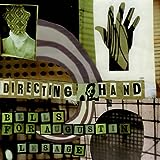