Like a shadow in a horror flick, the demons inside turn out to be nothing but fear.

I had my assignment...

My mind raced over my life and all the things I had done. I could not think of anything I had done that was not a direct response to something someone else had done, but I could not write that down. I could only write what I had done.

My mind screamed at me. I could not think of what to write next. There was nothing that I had done that was not in response to something someone had done to me. Why couldn't I write down what other people had done to me and my response to it? Why did it have to be about me?

I called my sponsor. I told her that I was sitting there with the paper in front of me. I was trying to write down what I had done, but I couldn't find anything I had done that was not in direct response to something someone had done to me.

"Perfect. Write down what you did. Let your mind rationalize it all it wants to. Don't write that stuff down. Listen to your mind and what it is saying. Then, move on to the next thing. It will get easier as you go."

I stared at the "I" I had written. That one word put a heavy load on my shoulders. I didn't like it. I didn't want to do it. I was sure there was something inside me that was pure evil.

"went to the bar." I finished the sentence.

I decided that fearless was the wrong word. It should have been courageous. The word fearless meant there was no fear and that was not true. At least, not for me. I had to do it in spite of the fear. That was courage.

We made a searching...

When I had finished with those on the trashed papers, I found that I had made a list half a page long. I put it away. There was no need to do it all at once, right?

A couple days later, I wrote some more on the list while my head screamed at me about the futility of writing all this stuff down and how no one will come near me when they find out what I have done. I wrote about things I had never told anyone. I wrote about things that still made my face burn with humiliation. I wrote about whatever came to my mind until I could no longer take the screaming in my head. Then, I put it away again.

I wrote in my notebook just before a meeting. I had thought of a few things I wanted to add to the list. My head had been screaming at me all week about it. My head was a canyon of echoing complaints and fears. I had not slept well in a day or two, but I wrote anyway. Then, it was time to go.

I did not trust my family not to read it, so I took it with me to the meeting that night. It was a great meeting, though I still didn't speak or cause anyone to look in my direction. I exited as soon as it was over and headed home.

The next day, I could not find my notebook. I searched the house as my mind screamed at me about irresponsibility, forgetfulness, stupidity, and disgrace.

... moral inventory of ourselves.

The cafe was empty, the weather was cold and I was sweating. What the hell was I gonna tell her about the list? I had not just lost the list, I had lost the whole notebook! I had lost everything I had done so far. I could not find them anywhere. I had searched my house for them. They were no where to be found.

"I suppose I don't have to tell you to be very careful with your notebook. Other people may read what is inside and then you will have lost the trust you have found in God." She said, pulling my notebook out of her bag.

"Where did you find it?"

"You must have been going out of your mind."

"Where did you find it?"

I had not thought of those things, except the boyfriend and kids. I had no idea why she wouldn't answer my question. I just stared at her.

"Don't worry. It was my boyfriend who found it and he gave it to me thinking it was mine."

"Now that you have it back. How has it been going?"

"I have done as you said. I let my mind scream at me all it wanted to and wrote the stuff down anyway."

"Good. Are you finished with it?"

"I dunno. I was so worried about where it was and how I was gonna tell you I lost it, I haven't given the list a thought."

"No, we will wait till your finished. Spend another week on it and we will meet again next week."

"If you think of anything you did, good or bad, write it down."

"What? Wait... You mean I need to write down good things I did too?"

"Of course." she laughed.

My mind reeled. I could write down good things I did? Wow!

Over the next week, I wrote down everything I had done that I could think of. I counted the good things I had done. I had written down five. I had only done five good things out of a list of two pages! Maybe I was satan's spawn... 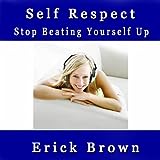 Self Respect Stop Beating Yourself Up Hypnosis & Guided Medita...
64%  6   7 CJRose
Addiction and Recovery