Stravinsky: The Genius Who Wrote The Rite of Spring

Igor Stravinsky's brilliant music scores stir up a lot of excitement. In fact, there was a riot at the premiere of his ballet "The Rite of Spring" and the police were called!

In one of the most sensational events in music history, there was a riot when Stravinsky's ballet, "The RIte of Spring", was first staged and the police were called in! The music and choreography of the ballet were viewed as just too rhythmically powerful and "primitive". Today his works no longer cause riots but they still stir up passion and excitement! Let us look at the life, music and legacy of this leading 20th century composer.

Stravinksy was born in St Petersburg, Russia in 1882. He started studying law but then, from 1902, began to learn music composition and instrumentation under the composer, Nikolai Rimsky-Korsakov.

In 1909 two of Stravinsky's orchestral compositions were heard by Sergei Diaghilev, the Russian ballet impresario and founder of the Ballets Russes (Russian Ballets). Diaghilev was impressed and commissioned him to compose a ballet score, The Firebird (French title, L'oiseau de feu).

In 1910 Stravinsky moved from Russia to Paris and then to Switzerland. Over the next few years he composed more works for the Ballets Russes -- the ballet Petrushka, the ballet The Rite of Spring (French title, Le sacre du printemps), and the neo-classical ballet Pulcinella.

In 1913 the audience at the Paris premiere of his ballet, The Rite of Spring, was so scandalized by the orchestral music and by the representation of a blood sacrifice and primitive fertility dances on stage, that a riot broke out and the police had to be called. The riot was actually great for publicity and overnight Stravinsky became the world's most famous composer.

Stravinsky moved residence again in 1939 when he traveled to the United States, where he was to reside until his death. In America he composed ballets such as Orpheus (1947) and The Rake's Progress (1951) and serial music influenced by Schoenberg and Berg, the latter works including his Canticum Sacrum (1955), the ballet Agon (1953-57) and the Requiem Canticles (1966).

He toured the world conducting his works, with trips to Australia, Africa and to Soviet Russia (where his work had been banned for almost 30 years until Premier Krushchev invited him for a state visit in 1962).

The Rite of Spring (by Igor Stravinsky)

Stravinsky's works can be divided into three periods:

His earliest music shows a truly original style (e.g. polyrhythms and dissonances) but with some influences from Russian folk music and from Rimsky-Korsakov and Debussy. He first burst onto the world scene with his three celebrated ballets:

After these came works with a new, more austere style. For example:

In this period Stravinsky became eclectic and was influence by everything from plainsong to Beethoven to jazz and swing. He also collaborated with great writers such as Jean Cocteau and W. H. Auden.

In this period Stravinsky used serial techniques such as we see in the composers Alban Berg and Arnold Schoenberg. From the latter he adopted dodecaphony (or twelve-tone technique).

Works in this period included:

Stravinsky was one of the greatest composers of the twentieth century.

In his first period (that of the ballets, The Firebird, Petroushka and The Rite of Spring), he proved to be a musical revolutionary and his works featured constantly changing rhythms and meters, dissonant harmonies, and brilliant and large scale orchestration.

In his second, neoclassical period, he showed that you could use classical forms but have very deep emotion hidden beneath an apparently austere surface.

In his third period (serial music), his works still retained much in common with his works of the two earlier periods, for example, an energetic rhythmical structure.

Stravinsky on the Internet

Igor Stravinsky | AllMusic
Igor Stravinsky was one of music's truly epochal innovators; no other composer of the twentieth century exerted such a pervasive influence or dominated his art in the way that Stravinsky did during his seven-decade musical career.

Debussy: The Genius Who Wrote Clair de Lune
Claude Debussy is the foremost figure in impressionism in music. He introduced new kinds of melody and harmony, which often suggest oriental music.

Mahler: The Genius Who Composed the Resurrection Symphony
Gustav Mahler was an outstanding composer and conductor of the post-Romantic era. His lush symphonies included folk music and pastoral elements.
Updated: 05/21/2015, DavidPaulWagner
Thank you! Would you like to post a comment now?
4

I watched part of that Petrouchka clip and loved it! Nice article!

Stravinsky's works such as The Rite of Spring still really make a splash! 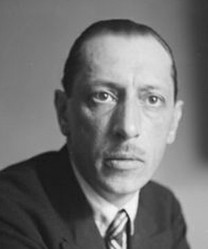 Stravinsky: The Composer and His Works, Second edition
100%  11   12 DavidPaulWagner
Classical