The Beauty of Autumn: Sunsets, Trees, and the Late flowers of Autumn

A series of photographs that depict the setting sun on an autumn evening.

During the change of season from Autumn to Winter the sky over Northern California creates some amazing views. This is an article that allows the reader to experience some of those views. Pictures include sunsets, trees, and the late flowers that hang on until winter arrives.

The Visions of Autumn:

For me, the crisp autumn evenings are the best time of the year. The chill in the air prickles against warm skin as words drift by in clouds of steam. The air is usually clear allowing for spectacular play between light and dark. The ambient change is thick across the landscape as Autumn fades into the dreary days of Winter.

Camera in hand, I traipse through this dance between the sleepy eyed trees, and the coming cold that hangs on the edge of my vision. The ghost of winter hovering just out of sight, but close your eyes and feel the raspy breath of snow waiting to weave a blanket against the earth. The empty sky is the entombment of lonesome yearning, unbroken and pure as a prayer ascending to Gods ears.

Stark though the sky is a slight change of how we look at things reveals the beauty of Autumn. The sky becomes a canvas that nature paints her scenes upon. Those are the gifts that emerge from the bleakness of hope and waning light of a cold sun. Warmth is kindled in awe and excitement held against the skyscape in shades of shadow, reflection, and solitude.

There in stillness, the echo of today is frozen in place against the coming of winter. This is a time when life slows to a near halt as nature tucks in the trees beneath their blanket of leaves and the geese take to the sky. Against the starkness, and emptying landscape, those who stay, take solace in the bleak day and the rich night. Harvest moon hangs like a pendant in a sky filling with diamonds.

These are some of the views that can be found around the Northern California landscape as Autumn whirls across the memory of Summers distant memory. They say that beauty is in the eye of the beholder, and that seems to be a truth that is echoed as Autumn tucks her head under her wing and Winter settles himself in front of the open window.

The rest of us bundle up against the cold and prepare ourselves for the short winter days and cold winter nights. In that instant, between Autumn and Winter, the changes that overcome the world are amazingly held captive in the eyes of the setting sun. The bleak is soon replaced by the spirit of the holidays and the festive days that unravel the sternness of Winters grumpy persona. Life is what we make of it and nature finds a way to make the most of life from one season to the next.

Sycamore Against The Sky:

Contrast of Fall Leaves against the Stark Sky:

The Arc of a Rainbow

Pansy Looking At The Sky:

Thank you Flora! So nice to run into you here. I agree that digital opens a lot of doors. If I had my own darkroom, I would do both, but since I do not, I stick to digital

These are gorgeous photographs, Dave. Autumn always has beautiful colours. I love to walk among the trees as the leaves are changing. And indeed, the camera must be close at hand. you never know when you find a tree or flower to capture. I was never much of a photographer until I got a digital camera that was small enough to fit into one hand. That camera opened a whole new world for me.

Thank you Cindy. It is one of my favorite times of year.

This is a beautiful depiction of Autumn, a time of change when life is celebrated as it prepares for the season to come. 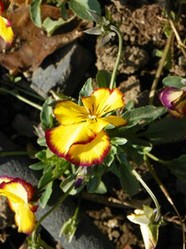